If you think the same, join us
Latest news on ETFs
See all 340 stories
ETF Hub ESG investing

BlackRock and State Street were largest purchasers of the securities

New bonds sold by fossil fuel companies were being snapped up by leading exchange traded fund providers including BlackRock and State Street even as these managers were preparing to pledge to slash their carbon emissions exposure, researchers have found.

About 14 per cent of the value of new bonds bought by 35 of the largest US corporate bond ETFs between 2015 and 2020 were issued by carbon-intensive companies in the oil and gas, utilities and coal mining sectors were , according to a new analysis by the Oxford Sustainable Finance Programme at the University of Oxford’s Smith School of Enterprise and the Environment.

The ETFs were run by BlackRock, State Street and DWS, which are signatories to the Net Zero Asset Managers Initiative set up in December 2020, as well as Pimco and Charles Schwab. Vanguard, the world’s second-largest asset manager after BlackRock and also a signatory, only discloses its ETF holdings on a monthly basis so it was not included in the Oxford analysis.

“It is when new bonds or shares are issued in primary markets and bought that capital actually flows from the financial system to the real economy. Financial institutions need to know how they are contributing to capital flows that could help or hinder tackling climate change,” said Ben Caldecott, founding director of the Oxford programme.

ETF providers should strategically choose which new bond issues to buy and finance only those companies that have robust plans to reduce carbon emissions, said Caldecott.

Newly issued corporate bonds are often sold at a discount to attract buyers. ETF managers can buy newly issued bonds before they are included in an index, which can provide a boost to a tracker fund’s performance. Purchasing the newly issued bonds, therefore, effectively means that the funds can gain an additional performance advantage from investing in these carbon-intensive industries.

Carlo Funk, head of environment, social and governance investment strategy for Europe at State Street Global Advisors, said that ETF providers were legally obliged to follow an index as closely as possible.

“There is some discretion available to asset managers when they use sampling to choose particular bonds but minimising an ETF’s tracking error compared with the underlying benchmark is still an imperative. Investors could potentially allow managers more wiggle room with tracking error but any change would require the agreement of clients or it could be seen as going against the ETF’s legally defined investment objective,” said Funk.

BlackRock, as the world’s largest fixed income ETF manager, was responsible for most of the purchases of newly issued bonds by carbon-intensive sectors along with State Street.

Bonds issued by carbon-intensive sectors accounted for 14 per cent of the value of the new issues acquired between 2015 and 2020 by BlackRock’s $80.7bn iShares core US aggregate bond ETF, known as AGG.

About 9.2 per cent of the value of the new bonds bought over the same five-year period by BlackRock’s $56.4bn iShares corporate bond ETF, known as LQD, were issued by carbon-intensive sectors.

BlackRock did not respond to requests for comment. However, Larry Fink, chief executive of the world’s largest asset manager, said in his annual letter to clients in January that the portfolios of BlackRock’s investors in aggregate remained carbon intensive.

“That cannot and will not change overnight, and BlackRock’s aggregate portfolio will necessarily be subject to the investment decisions of our clients,” wrote Fink.

Caldecott said a key question for ETF providers was whether climate factors played any role in the “active” investment decisions taken by ETF providers when evaluating new bond issues.

“Do they take account of environmental social or governance metrics?” he asked. 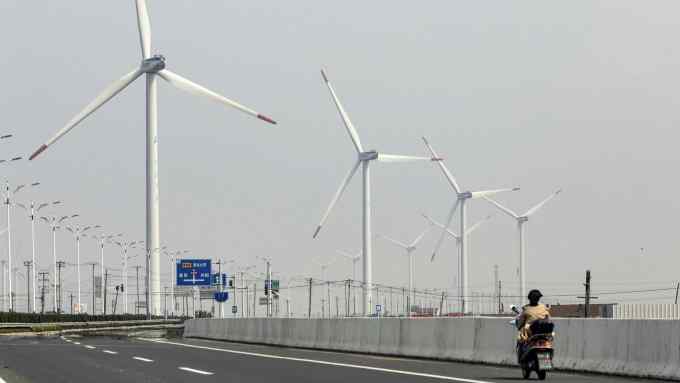