‘Having it all’ too often means ‘doing it all’, argues Girls Who Code founder Reshma Saujani

In the 18th century, Adam Smith, the Scottish political economist, set out the principles of free markets and free trade in his book The Wealth of Nations. But he was only able to study and write because he was supported by unpaid labour — in other words, his mother’s housework.

That is the point made by Reshma Saujani, founder of US non-profit organisation Girls Who Code, in her new book Pay Up: The Future of Women and Work (and Why It’s Different Than You Think).

Who cooked Adam Smith’s dinner — coincidentally the title of a book by writer Katrine Marçal — speaks volumes, she says, about the unacknowledged (and free) contribution of women’s unpaid caring, housework and emotional labour. It has kept economies going but created a crisis in mothers’ health and jobs in the pandemic.

Saujani, speaking over Zoom, says she spent 10 years telling girls to “barnstorm the corner office” by leaning in and girlbossing their way to the top. “I would get annoyed if I was giving a talk and someone raised their hand and said, ‘How do you do work-life balance?’ And I would wave [it] off: ‘Don’t focus on that. Go, go, go, go!’”

This determination that women could make it to the top if they just pushed drove Saujani on in her legal career, as well as in attempts to become a Democratic congressional candidate and New York public advocate — both of which failed. It was also her motivation to set up Girls Who Code, to increase the number of young women in computing. And to write books such as Women Who Don’t Wait in Line, Girls Who Code, and Brave, Not Perfect.

Until, that is, she found herself lying in the foetal position on the floor one Tuesday afternoon because she was ex­hausted, overwhelmed with work, and trying to look after two young sons in a pandemic. She had fallen for “the big lie”: that women can have a big career and family. Having it all, Saujani now says, is “a euphemism for doing it all”.

Talking to friends, family and colleagues, she realised she was not alone. Mothers across the US were suffering and angry. So she wrote an op-ed for media platform The Hill in December 2020 calling for a “Marshall Plan for moms”, to give mothers a means-tested $2,400 monthly pay cheque, as well as affordable childcare, pay equity and parental leave, which became a camp­aign to lobby politicians and employers.

The pandemic has meant “women are in crisis,” Saujani says. They have left the labour force, and “they’re suffering from anxiety and depression”. She hopes women, employers and politicians read Pay Up and think about not how women can fix themselves but about how to change a broken system.

How does she feel that she was previously oblivious to the difficulties? “I am definitely embarrassed,” she says.

Saujani now wants women to show their employers that parenting can seep into work. “No more apologising if you have to leave a call because your kid is sick, no more pretending that you don’t have all these other responsibilities, nor guilt if you don’t log back on to a call at nine o’clock at night”. Not only would this stop them feeling isolated but it would also force employers to stop organising the workplace around an ideal worker — someone much like Smith, unencumbered by cooking or school pick-ups.

She makes a case for subsidised childcare, for mandatory parental leave and for employers equalising paid paternity and maternity leave.

Is it useful to lump together senior executives who can pay for nannies — as she can — with shift workers unable to afford childcare? “There’s power in the collectiveness of our experiences,” Saujani argues. “When we talk about childcare and making it subsidised, it has to be for the restaurant workers and the nurses and the teachers, not just the women in the corner office.”

What about the dilution of the Biden administration’s Build Back Better bill, rowing back on 12 weeks of parental leave, around the birth or adoption of a child.

“It’s embarrassing. It’s shameful at this moment that we [would] rather bail out airlines and not bail out moms.”

Explore the Special Report
READ MOREWomen in Business
Why US mothers deserve a $2,400 pay cheque 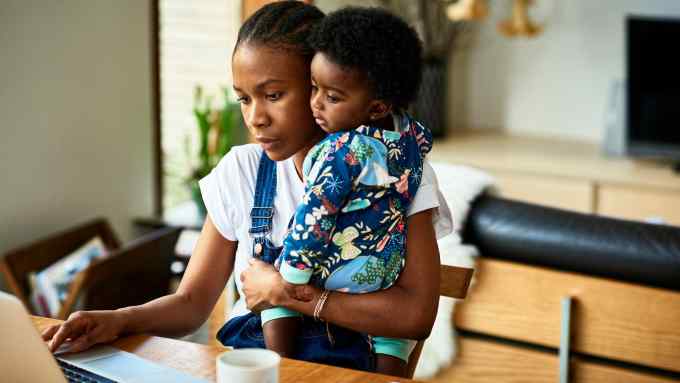