Women’s patience is running out over so-called banter

Mean and even vicious behaviour is often defended as ‘just a joke’. But the effects are insidious

In 2017, frustrated by a culture of systemic sexual harassment and discrimination in Californian politics, former lobbyist Adama Iwu organised an open letter to call it out. Signed by more than 140 women and published in the LA Times, the letter resonated far beyond California and beyond people working in politics.

Has behaviour changed since then? Not much, says Iwu, now in corporate government relations. “It feels like we’re dealing with the same things. Maybe they have better buzzwords, hide it better — they joke about it almost.”

Recent reports, such as the UK police watchdog’s investigation into London’s Metropolitan Police and the Anglo-Australian miner Rio Tinto’s rev­iew of its workplaces, have highlighted the harm caused by pervasive harassment and bullying behaviour. Yet, too often, it can be brushed off by perpetrators as mere “banter” — playful chit-chat that, they argue, upsets only those colleagues who cannot take a joke.

“The term ‘banter’ should be retired,” says Laura Bates, writer and founder of the Everyday Sexism Project, where women submit stories of discrimination and harassment. “It’s completely misleading . . . it’s like a catch-all, a cloak drawn over what people know to be unacceptable language and prejudice.”

While a necessary public conversation about the prevalence of such behaviour has opened up, it has also resulted in a backlash, Bates adds. “[There is] almost a sense of ‘go on then, report me’. There’s an awareness that it’s socially unacceptable . . . but, also, that impunity remains.”

Michelle Last, an employment lawyer and partner at law firm Keystone Law in the UK, says: “We all know what’s ac­cept­able and what’s not, but different people tolerate different things. It’s perfectly fine to have banter about other things, but we can all have a laugh . . . without stepping into that danger zone.”

The people making insensitive jokes and comments, often personal, are invariably those in the majority demographic in their workplace, who feel at ease in the existing culture, notes Last. Those targeted are almost always in under-represented or minority groups.

Bates sees a wide range of complaints submitted to the Everyday Sexism Project, from minor comments to unwanted sexual touching. 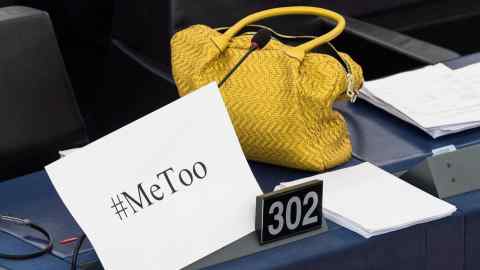 “If you have a culture where the low-level stuff is brushed off and accepted,” she argues, “that normalises and smooths the way for more serious abuses not to be taken seriously.” That is why employers and colleagues must address the issue, she says.

“Organisations have a bad habit of keeping certain people in positions because they’re very successful,” warns Last. However, it is better to deal with the main perpetrator sooner rather than later, because “they can leave such an amount of damage in their wake”.

The person being targeted may leave, or may complain and seek compensation — a situation that will be exacerbated if it emerges that previous complaints were ignored. And the perpetrator can end up leaving the business, too.

Some people are just jerks and they don’t care, and you can’t change that

Some organisations set up “tip lines”, which may be operated by third parties, to anonymously report incidents. But Iwu argues these do not work, because it is hard to take action as a result.

She says: “You have to show that you have processes in place that are going to treat the person who complains fairly — and the person who is accused fairly.”

Bates argues that recording and tracking allegations helps organisations recognise if there is a serial offender who is simply moved on to another department, or if there is a problem in one particular part of the organisation.

What should an individual do if they are picked on with offensive comments or worse? Everyone has an idea of how they would respond, says Bates, until the moment it happens: “Some people panic, some freeze. Some fear career damage if they speak up.” She advises keeping a record of what was said, witnesses, and copies of emails or messages, so that you have evidence if you choose to report it.

In some cases, just a quiet word is required. Speak up if you feel you can, says Iwu. “I have learned it’s easier for me to pull someone aside later and say, ‘hey, this is what I heard — I don’t know if you meant that’. Or, ‘you used this term, I don’t know if you realise the connotation, or how that might be offensive’.” Often, people were not aware, and they appreciate you saying something discreetly, she says. But not always: “Some people are just jerks and they don’t care, and you can’t change that.”

In male-dominated working environments, men are arguably in a strong position to call out sexist behaviour. But recent research by non-profit advocacy group Catalyst shows how the power dynamics and cultural norms of work culture inhibit men from intervening.

Asked how they would respond to sexist incidents, 86 per cent of men surveyed said they wanted to interrupt them, but only 31 per cent felt confident in their ability to do so.

Yet challenging apparently minor transgressions is important because they have an accumulative effect, says Bates. “Have a private word, say ‘I’ve seen this is happening, I want you to know it’s not OK. What do you want to do? Because if you want to report it I will support you’.”