France makes patchy progress on pay and promotions for women

Setting quotas for female board members has been greeted as a success, but there is still a lot to prove
Sarah White

When France brought in quotas to force large companies to appoint more women to their boards, back in 2011, the policy still had its doubters. Some were wary that it was too ambitious — France at the time was an EU laggard — others thought it was too blunt a tool.

A decade on, France is signing up for more, with president Emmanuel Macron’s government now extending quotas to companies’ executive committees.

And little wonder: the initial bet on gender goals has been widely greeted as a success. Yet France still has a lot to prove on promoting women into top business roles — even after a push by Macron since he came to power in 2017 to tackle gender imbalances, both in politics and in pay.

“I was not a huge fan of the idea of quotas, but I’ve got to recognise that it worked,” says Dominique Senequier, founder and chair of French private equity firm Ardian. “It brought a lot of women who were very competent out of the shadows.” 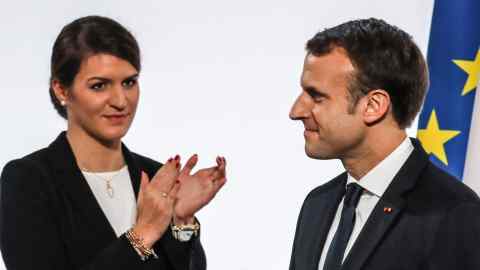 In terms of numbers, France has leapfrogged its EU neighbours. The number of female directors at companies in France’s blue-chip CAC 40 index has more than tripled in 10 years, reaching 46 per cent in 2021 — above the initial 40 per cent goal, according to consultancy Ethics & Boards.

The move has had other knock-on effects, too. French corporate boards are, on average, eight years younger than those in the US, says Denis Terrien of corporate governance association, the IFA. The increased diversity has widened the scope of experience and skills at director level, he adds. The lack of women with experience of the very top jobs, for example, forced companies to broaden their criteria when appointing executives.

France is also targeting a minimum of 40 per cent women on executive committees — which will mean roughly doubling the number of women by 2030, and giving them more say in companies’ strategic decisions.

However, even at a time when women’s issues have come to the fore, including in politics, France’s business world has been shown to fall short on other measures.

The presidential election in April will be the first since the #MeToo movement, which had its own version in France, called #BalanceTonPorc (or “expose your pig”), resulting in a stream of revelations about celebrities and politicians. And female presidential hopeful Valérie Pécresse, of the conservative Les Républicains, has not hesitated to highlight her experience with sexism — such as revealing she had twice been turned down for jobs because she was pregnant.

Macron, set to run again, points to initiatives such as fines for street harassment and improving police services to victims of violence, as well as helping to field more women candidates in parliamentary seats, having made gender equality an early priority of his presidency.

But his efforts to reduce the pay gap in companies has yet to produce conclusive results. Although more companies are providing data about pay policies and gender balance, the wage gap between men and women in similar jobs and with similar experience is still stuck at around 9 per cent.

Female presidential hopeful Valérie Pécresse highlighted her experiences, such as being twice turned down for jobs because she was pregnant

Currently, only two women occupy chief executive roles at companies in the CAC 40 index. This is set to rise to three shortly, when chief operating officer Estelle Brachlianoff steps up to run waste and water management group Veolia.

But if it is a shift, it is a glacial one. In a report last year, a French government advisory body on gender equality flagged other causes for concern. Beyond the listed companies in France’s SBF 120 index, data is far patchier and gender imbalances more glaring, it said. And, at the height of the coronavirus pandemic, companies’ ad hoc crisis committees often lacked women, it found.

Quotas have also disappointed as a tool to help launch women into the very top corporate jobs. Applying them to the executive committee level could move the needle a little, though. Marc Sanglé-Ferrière, who specialises in succession planning at recruitment company Russell Reynolds, points out that experience at that level is usually crucial to qualifying for chief executive appointments.

Companies are also looking to their own programmes. At Ardian, where Senequier is the only woman on the executive committee, that extends to longer-term outreach schemes in schools. Right now, however, the group still receives nine CVs from men for every one from a woman.