Flower to the people: behind the scenes of Lewis Miller’s ‘flashes’

The event florist has staged more than 92 guerrilla installations in New York. He’s made a lot of people happy in the process

It’s 7.30am, mid-November 2020, and on the south-west corner of 20th and Broadway the sun is starting to poke through the clouds. In front of a boarded-up Brooks Brothers store graffitied with the words “rents too high”, something Dalí-esque stops passers-by in their tracks. One of those rusty, ancient-looking trash cans so synonymous with New York sidewalks appears to have turned itself into a giant vase. Out spills a six-foot display of roses, asters, delphiniums and sugar maple. It’s a joyful, transient, yet strangely heart-wrenching gesture to the general public, a gentle but powerful reminder that, even in the most unlikely places, beauty can still be found.

The display – part floral arrangement, part street art – is the latest in a series of guerrilla “Flower Flashes” by celebrated florist Lewis Miller, a concept first seeded nearly 10 years ago when Miller was leaving his studio in the evening with an armload of flowers left over from an event. He walked against rush-hour traffic, coming up against besuited Midtown professionals leaving their offices. “What I remember is the sheer hunger in people’s faces when they caught sight of those big, bodacious blooms,” he remembers. “Getting on the subway, if you want to make people look, carry flowers. I live with them all the time and they had become like wallpaper to me, but this moment reminded me why I fell in love with flowers. That ability to light people up.”

The moment stuck with him as he continued his work beautifying East Hampton weddings and corporate events at Manhattan ballrooms and art museums with his lush, abundant arrangements. He had a client list that included Bulgari, Chanel and The Met, but something was niggling at him: “Flowers, I felt, should be for everyone. It felt wrong for nature to be something that would divide us economically. I had this idea of taking two things that I love, New York City and flowers – this clash of town and country – and doing something new.”

Then came the 2016 US election. The mood felt low. “We had had a midweek event and were gathering up all these big bags of blossoms afterwards and we thought, ‘What are we going to do with all of this?’” he remembers of the moment he conceived his first flash. “We laid it all out on the floor, divided the flowers by colour, flumped them up and went out very early the following morning to the John Lennon Memorial in Central Park.”

Four of them set out – Miller, the van driver, an assistant and Miller’s right-hand woman, Irini Arakas Greenbaum. They worked fast, snapped a picture to upload on their Instagram account and left. By the time people started arriving for their run or dog walk, the Imagine memorial was surrounded by a simple graphic halo of bright, psychedelic-coloured flowers. “We didn’t know if anyone would like it or not, or even if we were going to get kicked out of the park for it, but it didn’t matter. No one was paying me to do it, which was part of the fun,” says Miller. The response was almost immediate – their own Instagram post was joined by those from people who had discovered the flowers like a present that same day. “That was Flower Flash number one,” says Miller. “And if something feels right, you keep doing it.”

Miller and his crack team of guerrilla flash assistants have now racked up more than 92 flashes, with no intention of stopping any time soon. Since March this year they have done 18, because Miller says he felt the city needed them “more than ever”. There is something magical about chancing upon a flash. Flowers spring up overnight out of waste bins or grow like beautiful weeds from old phone boxes – if the weeds were roses and anemones. A bus shelter becomes a stage draped with garlands of sunflowers. In a particularly visually arresting example, a profusion of daisies and marigolds will pop up at one of New York’s construction sites. “We’re overwhelmed by construction in Manhattan but I love the Legoland element, the graphic juxtaposition of flowers with the turning gears and the stripes,” says Miller. He uses a minimum of 1,500 flowers in a flash, and sometimes as many as 6,000. “My joke used to be that one trash bin is going to have more flowers in it than your average American flower shop keeps in inventory,” he adds.

The only scratches this ephemeral graffiti leaves are those the public endure to pluck a thorny rose from the display. When the city’s streets were busier than they are now, an entire flash could disappear within 20 minutes.

Miller’s original intention was to make a weary commuter experience a moment of joy. No small feat. But though Miller still loves to do these “simple” flashes, he has added to his oeuvre. There have been awareness-raising collaborations with charities and foundations, including big hitters such as Christy Turlington’s Every Mother Counts and Ralph Lauren’s Pink Pony Campaign. This year Miller teamed up with American Express to surprise exhausted hospital workers outside their workplace. “Your generosity and mischievousness brought lightness and a sense of renewal to the serious work we do,” wrote Lynda Hartman, associate executive director for quality management at Lenox Hill Hospital.

Though the charity tie-ins inevitably involve more advance planning, generally Miller has managed to stay true to the punk, clandestine nature of that first flash –and he still never seeks permission from authorities. “This is not supposed to be a technically perfect flower arrangement,” he says. “It’s not meant to be overly executed and sit on a street corner and be admired. There’s going to be a squished leaf, a broken flower head. It’s guttural, instinctual. And it needs to be speedy.”

Miller always aims to use flowers that are left over from events or at the end of their life: “There are technicalities with flowers,” he says. “If you have a wedding on the weekend, they’re mush by a Monday morning, so it really only works with midweek events, which have all but dried up with Covid. Sometimes I use flowers from my vendors that would otherwise be going into a skip. They might be flowers that are not going to be sold, but they are beautiful.”

This year Miller parlayed the gesture into his Flower Flash Box (from $255). Blooms are delivered with a link to instructional videos that show how to create your own mini-flash at home, and 10 per cent of proceeds go to a different charity with each iteration. Shortly after New York’s first lockdown in March, Miller collaborated with American Express again, this time on a box filled with magenta peonies and freesia, and gave 100 per cent of proceeds – more than $50,000 – to the Greater New York Hospital Association. His Flower Flash candle ($68), scented with tuberose, jasmine and lily-of-the-valley, raises funds for Crossroads Homeless Shelter, based near Miller’s apartment.

And the Flower Flash photographs captured by Arakas Greenbaum – who also sources locations for the flashes – have been such a phenomenal success on Instagram that in October they launched the first in a monthly series of limited-edition prints ($350). “The flashes are so disarming, in a good way,” says Arakas Greenbaum. “They make you feel vulnerable.”

For Miller, the ultimate aim of his flashes remains the same as that he had in Central Park four years ago: “They serve as a simple reminder that human connection is needed, and will come back again.” 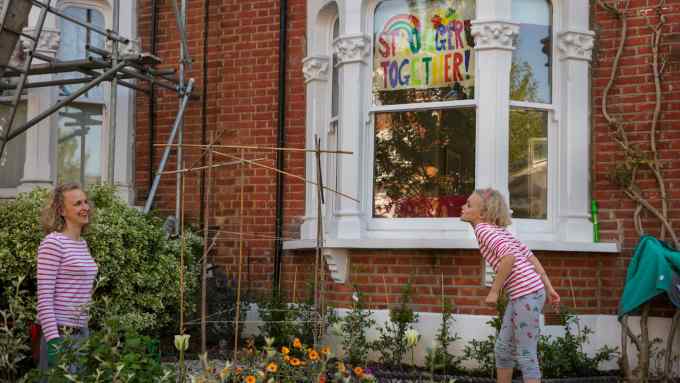