The sonnet “Ozymandias” always reminds me a bit of luxury goods houses. Bear with me — because I realise quoting Percy Bysshe Shelley seems painfully pretentious but it isn’t as bad as it may first appear when it’s something every kid knows by the time they’re about 13. And the picture it paints definitely has echoes in the world of fashion. Plenty of brands have felt that their great name is enough to sustain them but the industry is littered with casualties.

On Sunday, Lanvin returns to the menswear schedule under the designer Bruno Sialelli who was appointed this January. Lanvin is the oldest fashion house in Paris, but has, through a series of poorly-judged appointments and inept mismanaging, seen profits depleted and its status plunge. A majority stake was acquired by Chinese conglomerate Fosun International in 2018 at which point losses were estimated at €27 million. It’s a salutary lesson, for all who think themselves too great to fall.

At the Dior menswear show, lone and level sands stretched far away, in a soft shade of Dior pink. The future here looks rosy — it’s difficult to imagine Dior crumbling. Although, lest we forget, crumble it did for a while: just 25 years ago Dior was dusty, relative small-fry, its menswear restricted to a licensed line of shlumpy, ill-fitting suits dubbed “Monsieur”. It was then reinvented and relabelled Dior Homme in 2001, launched by Hedi Slimane, now of Celine. For the past decade, the house’s men’s line has been successful, but unremarkable.

With that in mind, Kim Jones’ revitalisation of Dior’s menswear has been masterful in both its energy and efficiency. Over the past year since his first show, he has entirely turned around our perceptions of Dior menswear, subtly redesigning its logo, evolving established styles, making everything look and feel new.

The “Ozymandias” thing links well with Dior’s current collection, created as it is in collaboration with Daniel Arsham, an artist whose work takes near-current items — cassette tapes, Polaroid cameras, boom boxes — and recreates them as “future relics”. Items are cast and eroded, like talismans of obsolete culture. There’s all kinds of undertones about the built-in expiry date of fashion there, but really Jones enjoys working in teams, and inviting people to come in and toy with emblems of Dior alongside him.

For each of the three shows (this the fourth) he has staged at Dior, he has partnered with a contemporary artist, an homage paid to Christian Dior’s own past as a gallerist, before the 1929 stock market crash wiped out his bourgeois family’s fortune, and Dior had to earn his own living designing dresses. Arsham cast pieces from the Dior archives — the phone and clock from Dior’s office, covers of his autobiography, also a version of Kim Jones’ redesigned and best-selling Saddle bag — and chipped away at them until they resembled aged artefacts archaeologically uncovered.

And isn’t that part of a designer’s role at an established house like Dior? To unearth stuff from the past, dust it off, make us want it again?

Well, part of it — but you also have to take it someplace new. “It’s ended up looking quite futuristic,” commented Jones, of the pale colours and techy fabrics that characterised this, only his fourth show for the house, but confident in a way that, like those Arsham pieces, collapsed time. You almost forgot, for instance, that years has passed since Dior first introduced its newspaper print — here it looked fresh, bold. It also, for me, was a little like the packaging you may wrap around some of these future relics, to keep them safe in transit. Time travel, or maybe just travel, also resonated in a collaboration with Rimowa, the suitcase manufacturer, and another LVMH brand.

As the Dior models trekked through the sand, some with sashes trailing in their wake like glamorous Foreign Legion deserters, the overriding impression was not the erosion of history, but the power and impact of tradition. You thought how great the clothes looked, sure, how innovative and interesting and indeed beautiful. But you were also struck by the incredible quality and craftsmanship that Jones ekes out of Dior’s ateliers, and that he designs his clothes to demonstrate.

That almost harks back to another time — it’s certainly rare today with few remaining practitioners capable of executing garments to such a degree. There was an absolute precision to the line of his tailored jackets, to their soft drape — something that will be appreciated by Dior customers looking for the best suiting that quite a lot of money can buy.

This show was proof positive that, in the hands of the talented, things from the past aren’t lifeless — indeed, what it all added up to was a collection that seemed timeless. It ultimately created exquisite things that will entice an audience, old and new. But on a meta level, it was a further demonstration of the mighty works of Jones as a designer. 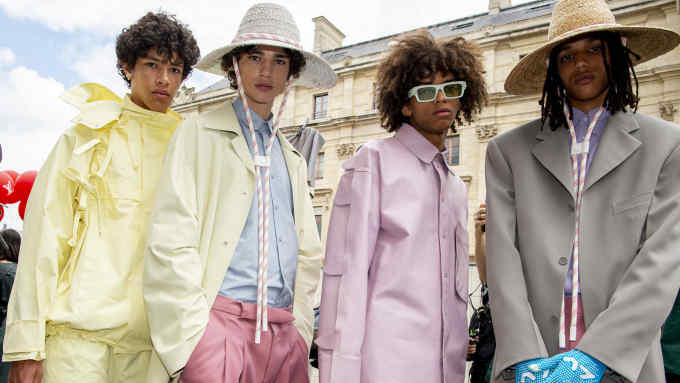