A motorway project that should have strengthened Romania’s road network and created a nexus between the Middle East, central Europe, and the former Soviet Union has instead become a symbol of the country’s transportation shortcomings.

In 2013, after 10 years of stop-start work, the Romanian government pulled the plug on the contract for the landmark Autostrada Transilvania (AT). About €1.4bn had been spent on a mere 52km of highway, far short of the 415km planned.

The AT should have been the spine of Romania’s transportation system, running from Brasov in southern Transylvania, 180km north of Bucharest, to Oradea near the Hungarian border.

The controversy-dogged motorway project had initially been awarded without tender by one government in 2003, and was then suspended by its successor for a year in 2005 while the contracts were examined. When work recommenced, poor project management meant that costs spiralled.

The AT is indicative of the problems with transport, says Nikolai Bozhilov, executive chairman of regional logistics company Unimasters. “The transport infrastructure in Romania is in pretty dire state. Roads and railways have not visibly improved.”

Mr Bozhilov says the exception is the Constanta South container terminal, operated by the UAE’s DP World, one of the most productive ports on the Black Sea. However, poor inland infrastructure has hampered Romania’s potential to compete with North Sea ports for container traffic between Asia and Europe.

“The main causes for the slow development of transportation infrastructure are political interference and the lack of professional capacity in managing these large projects,” says Catalin Drula, an MP who was transport adviser to former Prime Minister Dacian Ciolos.

“Large infrastructure projects, such as the vital motorways that should cross the Carpathians, have a long development cycle, while politicians are looking for short-term political gain,” Mr Drula says.

He adds: “The result of years of constantly switching priorities, nepotism and corruption is that there is a shortage of mature projects in the pipeline and whatever is there is of poor quality. Competent project managers have been pushed out of the system. The inevitable consequence is that projects are very slow to progress and construction contracts are often terminated with partial progress, and works are abandoned for years.”

See the latest Romanian business and finance news, alongside economists’ forecasts for GDP, inflation, current account and the leu-euro exchange rate — all in one place

The geography does not help. The Carpathians are a formidable natural barrier, and other ranges of mountains and hills also make construction difficult in much of the country. A lack of funds in the cash-strapped first decade and a half after the fall of communism means that infrastructure has deteriorated since then.

But since Romania joined the EU in 2007, broadening access to infrastructure funding, shortage of cash is becoming a poor excuse, particularly when one sees the gleaming railways, motorways, and metro (as well as the odd white-elephant airport) that Poland has constructed thanks to Brussels’ cash.

This is partly due to a lack of institutional capacity to spend the money, and partly due to policy choices. Public investment fell as a share of GDP from about 6 per cent in 2012 to 3.4 per cent in 2016; it declined by 35 per cent year-on-year in the first seven months of 2017, according to Ionut Dumitru, the chairman of Romania’s Fiscal Council (an independent budgetary authority established under the country’s Fiscal Responsibility Law).

“In order to accommodate tax cuts and increases in social spending while staying within fiscal restraints, governments have cut investment,” Mr Dumitru says.

The EU allocated €9.5bn to Romania under the 2014-2020 Large Infrastructure Operational Programme. Yet it has struggled to deploy this funding, partly thanks to several changes of government since the programme was launched.

The government may be pinning its hopes on its proposed Sovereign Development and Investment Fund — sometimes referred to as a sovereign wealth fund, but in reality quite different from the investment vehicles established by countries including Qatar, Singapore, and Norway.

The Romanian fund would hold a mixture of equity in profitable state-owned companies and cash, and invest in domestic infrastructure, including roads. The government plans to send a bill to establish the fund to parliament by the end of September, but otherwise details are thin on the ground. The reported initial cash injection of 1.85bn leu ($480m) for public projects is fairly insignificant given the scale of the investments needed.

“Co-investments [in infrastructure] with the sovereign fund could be a source of opportunity for investors but the information available about the objectives, final structure and operational model of the fund is still limited,” says Matteo Patrone, regional director at the European Bank for Reconstruction and Development. He adds there could also be investor potential in a proposed new law for public-private partnerships.

But questions remain about how the sovereign fund can succeed where deployment of generous EU funding has often failed. Mr Drula says that even directly government-funded projects have been hampered by poor management.

There is certainly no shortage of possible projects. In July, transport minister Razvan Cuc promised that the government would invite bids for the construction of 800km of motorway by the end of the year.

These include the crucial road between the auto-manufacturing centre of Pitesti and Sibiu (on the Bucharest-Budapest route) over the Carpathians, another linking Pitesti and Craiova to the west, and the route between Targu Mures in the north and Iasi on the Moldovan border.

Mr Drula describes this last project — estimated to cost €5bn-€9bn — as “of the utmost economic importance”, but difficult and expensive to execute. History suggests that travellers and traders may be waiting some time for it to be completed.

Get alerts on Property sector when a new story is published 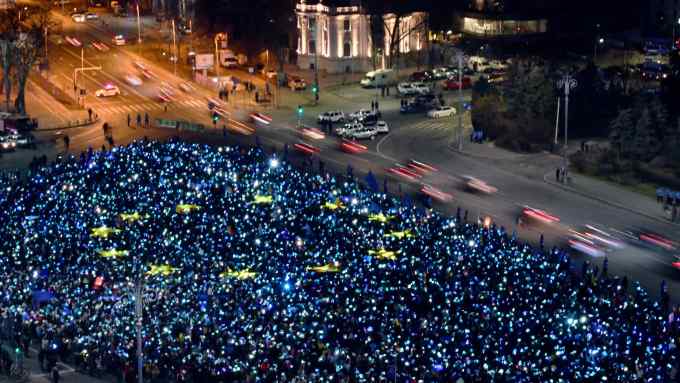 The country is the EU’s fastest-growing economy, and cranes on Bucharest’s skyline underline its modernisation, but changes of government, infrastructure problems and arguments over the role of judiciary show there is much still do to