The only way is up: the irresistible rise of wing foiling

A cross between windsurfing and snowboarding, this brand new water sport is quickly taking flight

Icy water covers my head, fills my nose and gushes down the back of my neck. I surface, spluttering, and wipe the salt from my eyes. I haul myself back onto my board for what is, I conservatively estimate, the 1,000th time today. It is a fine spring day, but the easterly wind is bitter and the English Channel is the colour of chocolate. I am kneeling – or rather, wobbling – on something resembling a small paddleboard. Attached to its base is a hydrofoil, which looks as much like a model aircraft as anything else. In my numb hands I am clutching a “wing” made from two inflatable bladders covered in something akin to tent material. Not for the first time, I am wondering what on earth I am doing. The radio on my arm crackles.

Jimmy, my instructor and one-third of school/retailer The Foiling Collective, based in Littlestone on Kent’s south coast, is shouting encouragement: “That was amazing, Chris! You’ve nearly got it.” I take a deep breath, raise my wing and try again.

The sport I am wrestling with is so new (commercial kit only really became available in 2019) that its name has only just been settled: “wing foiling”. The key element – to both its appeal and challenge – is the hydrofoil clamped to the underside of the board. Once up to speed, this lifts board and rider completely out of the water, allowing them to “fly”. The massive reduction in drag means a huge increase in speed, with riders regularly clocking 30mph.

Back on shore, Jimmy says that the wing part most closely resembles windsurfing, though it’s not attached to the board, while the hydrofoiling part feels like snowboarding in deep powder. Put together, it’s about “delicate weight inputs, an incredibly fluid, otherworldly feeling and all done warp-speed fast”, he says.

I became obsessed with hydrofoils while researching Sea Fever, a maritime miscellany I wrote with my sister. They have been around for more than 100 years, though originally they were attached to motor boats. For a long while their only “leisure” application was being used on highly temperamental rocket ships to break sailing speed records. But in the 2000s and 2010s, the sailing world really took to hydrofoils. Now the pinnacles of the sport, the gruelling Vendée Globe and the ultra-elite America’s Cup, are both competed while “flying”.

Not to be outdone, the extreme water-sports community got in on the act. Better engineering and cheaper carbon-fibre manufacturing resulted in a proliferation of new foil sports. Surfing, kitesurfing, stand-up paddleboarding, windsurfing and wakeboarding all got the treatment. But it is in wing foiling that the hydrofoil has found its apogee. Champion water athletes Kai Lenny, Annie Reickert and Robby Naish are all converts – their Instagram accounts show them clearing the water and performing a series of flips and twists mid-air.

In the UK, Richard Boughton is the godfather of the sport. The technical editor of Foiling Magazine became the country’s first instructor in September 2020. “I used to do extreme sports and, other than the adrenaline, I couldn’t tell you why,” he says. “But wing foiling is different – it’s very meditative. You have to completely focus on what you are doing because you are controlling the pitch and direction of the board, all the while trimming the wing to give you speed. Your mind can’t wander – you’ll fall off.”

A host of practical reasons also contribute to its popularity. Aside from being an incredible workout for your core, once mastered, the sport is very smooth – because the board flies above the water, there is none of the relentless battering from waves that wreaks havoc on tendons, joints and knees. There’s also the fact that its first cousin – kitesurfing – is pretty dangerous and needs a big beach to set up. By contrast, with wing foiling you need next to no space and, if it gets hairy on the water, you simply let go of your wing and it bobs beside you while you come to a halt.

Sadly, wing foiling doesn’t come cheap: a basic kit comprising a board, a foil and a couple of wings costs £4,000-£4,500. Of course, schools springing up around the world can provide kit for lessons.

A week after my initial encounter, I find myself back at Littlestone. The wind has swung round to the south-west and is no longer bitterly cold, though the water remains icy. I wobble to my feet and start picking up speed. The board – improbably, magically, preposterously – rises out of the water. Silence descends and the world disappears. A thought forms in my head: “I am flying.” And in that moment of realisation, just as a dreamer wakes the moment they know they are dreaming, I lose control and crash back into the sea. Even though my flight lasted little more than a few seconds, I have done it. I officially flew. 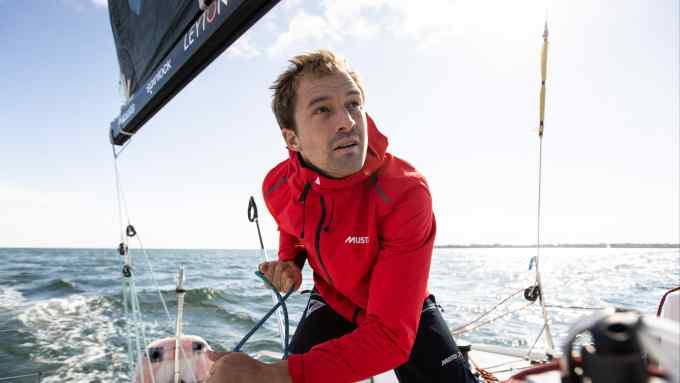