Few drinks spell summer holiday quite like a garnet-red jug of Sangria. But if you’ve been there, done that (and had the hangover), then it might be time to try its lighter cousin Sangria Blanca. Because this white wine-based twist on Spain’s fruity sundowner seems to be a muse for mixologists right now.

Parrillan in Borough does a Sangria Blanca made with albariño from Galicia’s Ángel Sequeiros winery, stirred with apricot liqueur, amber vermouth, apple juice and lemon and peach slices. At Arcade Food Hall in the West End they do a twist with friulano white wine, gin, honeydew melon, cucumber and ylang ylang. The house pour at Andalucian restaurant The Barbary Next Door in Covent Garden is a blend of white Rioja, organic Nibiru grape juice, cava, orange and lemon. “It’s one of several quick wine mixers, including the Kalimotxo [red wine and Fanta] and the Tinto de Verano [red wine and Sprite], that have been consumed in Spain for many years,” says bar manager Beltrán de Soto.

The blueprint for a Sangria is wine (most often red) with some form of fortification such as brandy or gin plus a mixer and fresh fruit. “But you can go wild, adding gin, vermouth, rum, vodka or amaro, your own fruit syrups, juices or fizzy drinks,” says de Soto. “It has always been associated with cheap and bad wine but it’s very versatile. And of course everyone’s own recipe is ‘the best’.”

Everyone’s own recipe is ‘the best’

The award-winning Two Schmucks bar in Barcelona got so tired of tourists asking for Sangria they decided to create their own – with a twist. “Sangria is basically old fruit, wine gone bad, a bunch of sugar and cheap brown liquor,” deadpans co-owner Moe Aljaff, “so we approached the drink using the same DNA with better-quality ingredients.” Their answer was a cocktail of clarified banana juice (old fruit), natural white wine (wine gone bad) and brown buttered vodka (cheap brown booze).

Miguel F Lancha, the Spanish-born cocktail director of ThinkFoodGroup, chef José Andrés’s restaurant group in the US, favours Sangria twists that are deliciously high-low. At Barmini in Washington DC, he’s served strawberry Sangria “slushies” frozen with liquid nitrogen, and Sangria Blanca “spheres” that dissolve in the mouth. For a private event he made a white Sangria with cava, bianca vermouth and citrus syrup scented with lemongrass and zests of calamansi, Meyer lemon and Buddha’s hand. “Sangria made with cava,” he says, “is something you see more on the Costa Brava.”

HTSI
At home with Champagne Charlie 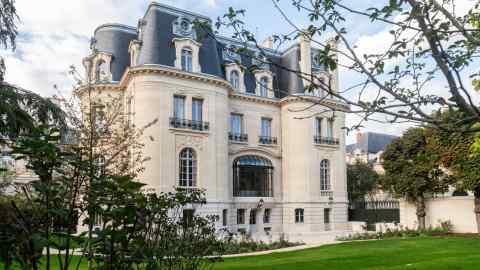 To celebrate the launch of its new roof garden, New Jersey’s artsy The MC Hotel has created a white sangria made with Hendrick’s gin, pinot grigio, agave and orange liqueur, garnished with homegrown cucumber and herbs, to “bring out the freshness of summer”, says head bartender Joey Brown. Right now it’s Sangria season – wherever you are.