F1 bets big on Las Vegas to accelerate US expansion

It was not long ago that Formula One was still failing to resonate in America — undermining the series’ global aspirations. As if it were not galling enough that the US hosted only one Grand Prix a year, spectator attendance at the single Austin event was also unspectacular.

But, somehow, all that has changed. Sponsors in the US are lining up to partner with F1 and racing teams. Miami held its first Grand Prix this year, and the attendance at Austin has exceeded 400,000 for two years running.

So F1’s next big bet is a race on the Las Vegas Strip, next November. Red Bull, Mercedes, Ferrari and the rest of the grid will burn rubber in a Saturday night showdown that is being billed as a collision of the “greatest racing spectacle on the planet” and “the sports and entertainment capital of the world”.

With smoke billowing from his tyres as he performed doughnuts in his Mercedes, seven-time world champion Lewis Hamilton was the star attraction when F1 started the countdown to the race with a launch party at Caesars Palace this month.

“The launch in Vegas was, wow, speechless,” F1 chief executive Stefano Domenicali tells the Financial Times. “I think we have delivered on what the American market wants: great entertainment [and] experience.”

Las Vegas is just the latest expansion of the sport’s gruelling schedule. “We want to have 24 different Super Bowl finals,” the F1 chief adds. Along with races in Brazil, Canada and Mexico, the Austin, Miami and Vegas events give F1 critical mass in the Americas, in addition to growth in the Middle East through Saudi Arabia and Qatar.

“We were a very European-centric world championship,” Domenicali points out. “In the future, that centricity will disappear because we’re going to have more and more races in all the different continents of the world,” he explains, highlighting ambitions in Africa and Asia.

When John Malone’s Liberty Media acquired F1 in an $8bn deal nearly six years ago, the question was how the US billionaire’s investment group would expand the business. The departure of Bernie Ecclestone, who ran F1 for so many decades, left many wondering how it would fare.

The big hope was that US ownership could crack America. But success didn’t come overnight. Negotiations to race at circuits other than Austin dragged on so long they posed a dilemma. The question, according to Domenicali, was whether F1 needed “to keep pushing and believing in this market or not”.

On the face of it, the pandemic made matters worse. Teams faced financial ruin as the 2020 season was placed on hold and then only 17 races were staged.

But drivers such as McLaren’s Lando Norris had the downtime to play computer games online, stream their exploits on Twitch, and chat with fans. Netflix’s Drive to Survive F1 documentary series was a smash with millions stuck at home. Liberty Media’s investments in digital media and its embrace of streaming paid off — and America was watching.

“The arrogance that we had before was coming to the US for three days [a year], expecting that everyone was talking about F1 without investing, without commenting, without communicating, without connecting with the market and the fans,” admits Domenicali, who became chief executive in January 2021.

An influx of fans, extra races and more sponsors are proving good for business. F1’s revenues totalled $1.8bn in the first nine months of 2022, versus just shy of the $1.5bn in the corresponding period of 2019, the final year before the pandemic disrupted the ordinary course of business. From paying next to nothing to screen F1, Disney’s ESPN renewed its contract for the US broadcast rights, with each race this season attracting a record average of 1.2mn viewers. The inaugural Grand Prix in Miami was watched by an average of 2.6mn fans.

The Vegas race could take business up a notch. Caesars Entertainment, MGM Resorts International, and the hotel and casino Wynn Las Vegas are founding partners of the Las Vegas Grand Prix. Liberty Media is also trying its hand at promoting the race.

“In just over a year, F1 fans from around the globe will see how Las Vegas throws a party,” says Steve Zanella, MGM Resorts’ commercial chief.

Typically, F1 makes money from broadcast deals, sponsorship and charging promoters for the right to stage races. But, earlier this year, the group invested $240mn in 39 acres of land east of the Strip to accommodate the pit, paddock and some hospitality areas for the race.

Greg Maffei, Liberty chief executive, explained to analysts earlier this year: “We see the opportunity to be a promoter as a way to expand our understanding of the business . . . how to be the best F1 product on the track for other promoters, as well to look at an opportunity to grow our knowledge and our understanding, and potentially promote other races down the road.”

For Domenicali, Vegas is just the next step towards putting F1 on a par with the sports that dominate American culture. “It was clear since the beginning that the American market is still the market where we believe there is a huge potential to grow,” he says.

“We’re just scratching the surface of what we should have.” 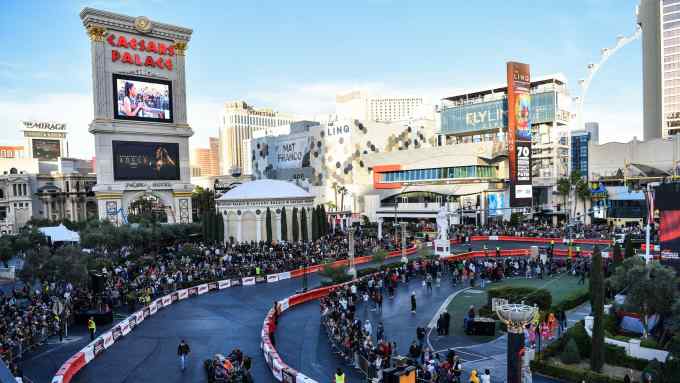