Shares in China’s Xiaomi tumble after US investment ban

Shares in China’s Xiaomi sank after the US government added the smartphone group to an investment blacklist, in a move that is likely to thin its ranks of American shareholders.

The Beijing-based company’s stock dropped 10.3 per cent in Hong Kong trading on Friday, hours after the Pentagon added it to a list of companies with suspected ties to the Chinese military. That, in conjunction with a separate executive order, will block US investors from buying its shares 60 days from now and will require Americans to eventually sell their holdings.

The move marks a significant blow for Xiaomi, which had been a big beneficiary of Washington’s campaign of sanctions against Chinese competitor Huawei. That had helped Xiaomi’s sales to surpass US group Apple’s, making it the world’s number three phonemaker by units sold in the third quarter.

Its shares soared 227 per cent last year, pumping up its market value at the end of 2020 to $108bn. Large Xiaomi shareholders include US fund managers BlackRock, Vanguard, Fidelity and State Street, according to Bloomberg data. Friday’s share price fall cut Xiaomi’s market capitalisation by more than $10bn.

State Street declined to comment on its Xiaomi holdings. Vanguard, Fidelity and BlackRock did not respond to requests for comment.

An executive order from US President Donald Trump in November targeted US investments in Chinese businesses alleged to have ties to the country’s military. The Pentagon’s list included China’s three big state-owned telecom carriers, prompting the New York Stock Exchange to de-list the companies.

S&P Dow Jones Indices, MSCI and FTSE Russell all removed China Telecom, China Mobile and China Unicom from their global equity indices. But State Street decided that its $13.4bn fund that tracks Hong Kong’s Hang Seng index, which contains two of the telecom groups, could continue trading in securities of the sanctioned companies.

Wendy Wysong, a partner at the Hong Kong office of law firm Steptoe & Johnson, said the Trump executive order did not apply to foreign subsidiaries of US companies. However, she added that “a US company cannot evade the prohibitions by directing their Asian subsidiary to deal in the securities”.

The US defence department said the move against Xiaomi and eight other newly listed Chinese companies aimed to counter the country’s “military-civil fusion development strategy” but offered no evidence of the smartphone maker’s involvement in this.

Xiaomi said in a statement to the Hong Kong bourse on Friday that it was not controlled by, or affiliated to, the Chinese military and that it was “reviewing the potential consequences of this to develop a fuller understanding of its impact on the [company]”.

China’s foreign ministry said on Friday the US was abusing its state power, adding that it would “take necessary measures to protect the legitimate interests of Chinese companies”. 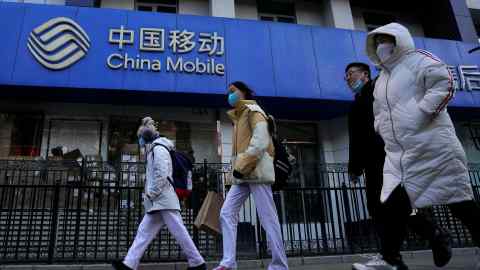 Analysts say the case against Xiaomi is thin and could be reversed under the incoming Biden administration.

“Although it won’t be Biden’s priority to undo each and every one of Trump’s outgoing moves, the Xiaomi investment ban’s deadlines could be postponed — most likely for a few weeks at first, then possibly more durably,” said Andrew Bishop, head of research at policy risk consultancy Signum Global.

CK Lu, an analyst at research firm Gartner, said the investment ban would not affect Xiaomi’s products or supply chain but could hit its ability to raise capital if US shareholders could not buy its shares.