An exclusive look at Villa Passalacqua

The first time Valentina De Santis set foot on the premises of Villa Passalacqua, she assumed it would also be her last. It was October 2018: the three-storey, 18th-century villa in the tiny Lake Como town of Moltrasio was being sold at auction, and De Santis and her father – the only bidders to appear in person – had high hopes but low expectations. “It was a super-closed but mostly remote auction. I think there were fewer than 10 bidders,” she recalls. “When we rang the gate – it was a cloudy day – a ray of sunlight broke through and hit the bell, and I thought, ‘Well, maybe that’s something . . . ?’ And funnily enough, it felt like many people there were rooting for us, even there at the villa. We were sure there’d be at least one bidder with no ceiling on price, which was definitely not us. We didn’t really believe we would get it.”

Three and a half years later, and following a renovation spend of about €20mn, Valentina and her family will open Passalacqua to guests on 3 June. There’s a reason locals had been quietly rooting for the family: since 1975, Paolo and Antonella De Santis – and, for the past decade, 39-year-old Valentina herself – have owned and operated the Grand Hotel Tremezzo, in the mid-lake region close to Bellagio. For its many loyal guests and first-timers alike, the Tremezzo – with its alpine “beach” and floating swimming pool, outposts of Gualtiero Marchesi and Giacomo restaurants, vintage wood boats flying the signature orange flag and high-ceilinged, fin de siècle charm – is Lake Como. And the De Santis family, who can often be found on site, are some of its most charismatic ambassadors.

Passalacqua is a different proposition. It has just 24 rooms and suites, compared with the Tremezzo’s 90, spread out over an enormous amount of square footage on five acres of private land. That scale informs the whole atmosphere, which is both more intimate and, in some ways, more exclusive than that of the Tremezzo.

It’s easy to spot: the only building in Moltrasio – just to the north of Cernobbio – that’s surrounded by a wide skirt of green. Built in 1767, before much of the town existed, Passalacqua has some of the most extensive and beautiful private gardens on the lake. The multiple terraces are planted with an olive grove, vegetable plots and heritage roses, and shaded by 200- and 300-year-old magnolia trees and cedars of Lebanon. Its façade, painted pale butter-biscuit yellow, stands out above them, striking for both size and impeccable symmetry.

Passalacqua was still a private home when it came into the De Santises’ hands in 2018. The previous owner, an American banker, had renovated it in 2000 and commissioned the celebrated late landscape designer Emilio Trabella to restore the gardens along formal Italian 18th-century lines. While everything functioned perfectly, the family had a vision that required some (re)doing.

“We started with something specific in mind, which was the feel of a real comasco home,” Valentina says. Hotels that feel like home is a claim that is rarely made good on. But what the De Santis family has created hits the mark – an environment composed of three centuries’ worth of beautiful things, sourced from fairs, dealers and auction houses, and family heirlooms, all assembled with a clearly accomplished sense of balance and flow.

The family enlisted San Francisco-based design firm Bamo – whose work ranges from the slick Capella in Bangkok to Villa Feltrinelli on neighbouring Lake Garda (a sort of Holy Grail of old-school hotel maximalism) – to shape the initial project. “They really helped us make sense of the more difficult spaces,” says Valentina, which included the 60sq m bathroom in the Bellini Suite, the largest in the villa.

Bathtubs sit beneath windows framing 1950s-postcard views of the lake

The De Santis task – and eventually, she admits, the family obsession – was amassing all of the art, as well as the glassmakers and metalsmiths and lighting and textile designers. “My parents handled most of the furniture,” Valentina says. “They went to the fairs in Parma, and auction houses in Naples, Emilia-Romagna, Tuscany. Mostly they just bought what they loved without knowing where it would go, and usually a good place in the villa revealed itself.” The De Santises commissioned the Murano glassmakers Barovier & Toso to design sconces and chandeliers for the entire villa, including six spectacular two-metre-tall fixtures set into the windows of the triple-height entrance hall. Etched-glass minibars are based on an 18th-century trumeau; the large ottoman coffee tables, covered in hand-painted leather, were made to Passalacqua specifications by Bordoni, an Emilian leatherwork boutique.

De Santis’ father and mother collected the hundred or so 18th- and 19th-century prints that now hang throughout all three of Passalacqua’s accommodations (in addition to the villa, there are eight rooms in the former stable building, known as the Palazz, and the Casa al Lago, a four-room “cottage” on its own garden terrace that can be booked as a private residence). In the bathrooms, spaces have been shaped by partitions clad in riotously mottled marble; bathtubs sit beneath windows framing 1950s-postcard views of the lake; etched mirror gleams and glints everywhere. 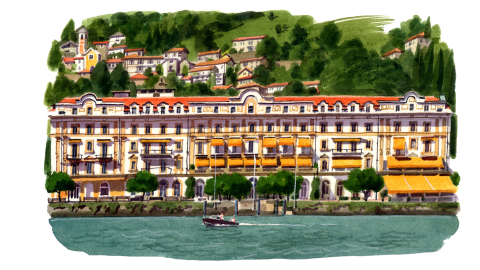 In the Palazz, the mood in the rooms defers to the lower-key architecture of the building, which once housed livestock. “Everything started with the ceiling beams,” says Valentina – massive rough-hewn oak lengths that were left uncovered. She commissioned Fortuny for the hand-painted silk wall and ceiling lights, including the cascading 3m chandelier around which the main staircase spirals. The simple palette – oxblood red and forest green – was inspired by a fresco remnant on one of the walls. Artisans hand-stencilled a tone-on-tone, gloss-on-matte damask pattern across the walls, which is cast into relief where the light hits it. Downstairs is the spa, where the star is the colonnaded former manger – now a relaxation area dotted with vintage rattan chaises.

But in Como, al fresco is the place to be, and Passalacqua is going to be a place of places thanks to the very clever leveraging of its six garden terraces, which are connected by a winding pebble ramp that leads up from the dock to the villa (guests are trundled up and down in an electric vintage convertible Fiat 500). At villa level, breakfast and lunch are served under wide green, white and ochre-striped marquees. One terrace below is the pool, surrounded by lush lawns and flanked by the Winter Garden, a greenhouse transformed into a bar by Milan-based designer JJ Martin, in a pared-back iteration of her signature multicolour-pattern style.

Below this are the rose gardens, which benefit from the shade of five huge magnolias. Keep winding down, and you reach the massive clay tennis court. “We call it our infinity court,” she laughs. There is a long vegetable garden and, next to it, a bocce court. The gym is in a second converted greenhouse behind the olive grove; outdoor equipment – an elliptical, a stationary bicycle, a rowing machine – sits among the trees. Gazebos for private lunches and dinners dot the scene. From almost every vantage point are views onto the lake, and beyond, the steep slopes of Blevio and Monte Boletto. As Italian dreams go, it’s extremely hard to beat.