Your hands are sweaty. Your arms scream . . . so how do you negotiate an overhang 40ft up a wall? One of Britain’s most intrepid climbers shows how to hang tough

It’s a bleak Saturday morning in January and scores of climbers are swarming up, down and over the artificial faces, cliffs and boulders at an indoor climbing centre in north London. However, it’s unlikely any of them has conquered as many of the world’s toughest ascents as James Pearson, one of the small group of British climbers able to make a living purely from the sport, and who, today, is mingling anonymously alongside them as he prepares to work with me on my technical skills.

Pearson, 28, started climbing when he was a teenager, skipping school to practise on the gritstone outcrops of his native Peak District. He grappled his way to the top of the climbing world in 2008, when he made his first ascent of the notorious Walk of Life, at Dyer’s Lookout in Devon. Traditional climbing routes – those where climbers do not use permanent anchor points but rely on driving their own anchors into the rock, removing them as they go – are graded by severity and the Walk of Life’s then rating made it one of the toughest in the world. In 2011, Pearson became the first traditional climber to achieve a full ground-up ascent of the Muy Caliente route, on the harsh Pembrokeshire sea cliffs. In 2012, he was part of an expedition to Mount Kinabalu, Borneo, that opened some of the world’s most gruelling high-altitude free climbs.

Indoor climbing allows the safe honing of skills before outdoor challenges are tackled. There are 450 different routes at the centre, each identified by differen-t coloured grips screwed into the plastic and wood walls. Climbers are supposed to stick to one colour, when often it’s tempting to grab whatever comes to hand. I’ve followed a green route, stretching for irregularly sized painted blocks shaped like Shrek’s ears. Under Pearson’s guidance, I’ve reached an overhang 40ft up a climbing wall – but I’m finding it impossible to negotiate and have been clinging on at the same spot for several minutes. Pearson skipped up the entire ascent in 50 seconds.

I’ve climbed in the Alps before but, although conditions here are more controlled, there comes a point when upward progress inevitably grinds to a halt. “You need to keep your bum closer to the wall because it affects your balance,” shouts Pearson from below. “Hug the wall – hanging outwards saps the energy from your arms.”

I can feel the tendons in my fingers tightening up, as my shoulders struggle to take the strain. My arms are already above the outcrop but persuading my legs to stretch upwards to the next green hold is proving a challenge. I have a harness around my waist, which is attached to a climbing rope. This runs up through a pulley system at the top of the wall, then back down to Pearson.

The rest of my equipment is minimal. I have a small bag of hand chalk hanging around my waist, to soak up sweaty palms and improve grip, plus I’m wearing a pair of shoes that seem deliberately designed to inflict pain when walking. But it is their very inflexibility that makes it easier to keep your foot on the thinnest of ledges. Helmets are not compulsory and most people are wearing tracksuit bottoms and loose-fitting tops.

Perhaps the best feature of indoor climbing is that when the challenge becomes too great, you can simply let go. It’s an odd sensation to release my grip, letting Pearson take my weight and lower me down. The descent takes a matter of seconds and, back on the floor, I can feel the energy has drained from my arms after just one climb.

“There’s no shortcut to becoming a good climber,” explains Pearson. “The only way you can develop the right muscles is to practise as often as you can. Flexibility is important but you need strong fingers and arms too. When you start, there is an over-reliance on the arms when experienced climbers often rely on their legs a lot more.”

As well as Borneo, Pearson has climbed in Tasmania, Newfoundland, Turkey and Greece – he is a global athlete for outdoor clothing brand The North Face – but even he expects to suffer the odd fall. “I once fell 20m before the rope caught me. If the drop is vertical, you tend to escape injury. When there is an angled rock face, your body bounces off the wall on the way down. It’s painful but I’ve never broken anything.”

There’s no shortcut to becoming a good climber. The only way you can develop the right muscles is to practise as often as you can

His only scar is on his right cheek, cut when he fell off a climbing frame as a child. “My mum says I liked to climb everything, although I didn’t start proper climbing until I was 15. People think it’s a dangerous sport but if you follow the rules, climbing is no more dangerous than a game of football.”

Pearson left Britain five years ago to travel around the Alps in a camper van, before deciding to stay in Austria. Last year, he married his girlfriend, French competition climber Caroline Ciavaldini, at a climbing festival in Turkey. This summer they are planning a three-week expedition to the Philippines, where they intend to do some rare cliff climbs.

Looking around the centre, it’s clear that most people here are lean and athletic. “You rarely see an overweight climber because you need a good power-to-weight ratio to haul your body up the side of a wall. I eat a lot because I burn calories. I do a little gym work and some running but really, climbing is my only exercise,” says Pearson.

Once I’ve regained enough energy to climb the stairs, Pearson takes me up to the bouldering area – one of the fastest-growing areas of the sport. Bouldering involves climbing up rocks, often no more than 20ft high, without ropes or a harness. The artificial ones in the centre look deceptively easy, surrounded by deep padded floors and individually coloured holds dotted up the side.

Pearson tells me that climbers use bouldering to perfect their techniques – it also doesn’t require a climbing partner to take your weight when you fall. “It’s best to stand back and try to work out a route before you start. Sometimes the route can be exceptionally difficult, even though the top is very close,” he says.

As if to prove the point, Pearson shows me a technique called a dyno. He attaches himself like Spider-man to holds at the bottom of the boulder, then leaps upwards to grasp a single hand hold that would have otherwise been out of his reach. For a spectacular moment, he is completely airborne before ending up swinging by his arms from the next hold. There’s an audible gasp from other climbers and a distant ripple of applause.

I choose an easier route up the boulder, with Pearson advising me on which move I should make next. It feels like a game of chess, where the next move is even more crucial to staying in the match. After three attempts I finally reach the top before realising I will now have to execute my own “dyno” – letting go of the rock face and falling back down to the floor.

For details of James Pearson and Caroline Ciavaldini’s Philippines expedition, which starts on February 15, see www.onceuponaclimb.co.uk

READ MOREHow To Spend It: The Travel Issue
The 10 best climbs in Europe 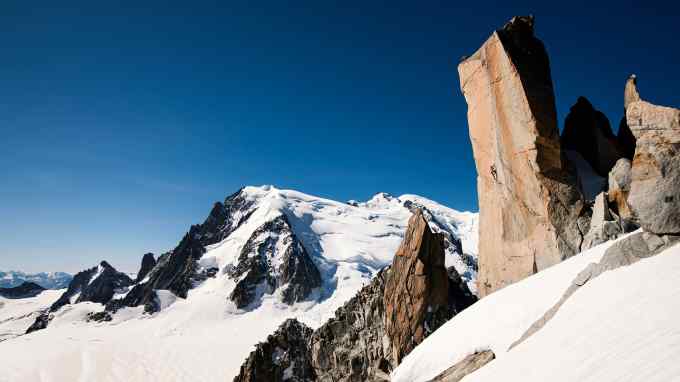