The technology behind Bulgari’s new Octo Finissimo Minute Repeater — a mechanism that chimes the hours and minutes through a system of hammers and gongs — was devised for telling the time in the dark in an era long before Thomas Edison had his lightbulb moment.

But, as we are often told, modern haute horlogerie is not about what we need but about what watchmakers can achieve — in order to attract well-heeled collectors. In this case, the remit was to create the thinnest minute-repeating wristwatch in the world, but one that was still one of the clearest-sounding.

At 6.85mm thick — a full millimetre less than the 2014 Vacheron Constantin that previously held the “thinnest” record — the Octo Finissimo represents a horological milestone both by virtue of its slim dimensions and its 21st-century interpretation of a 17th-century invention. Its hand-wound movement, which comprises 362 individual components, is a mere 3.12mm thick.

The minute repeater mechanism takes the form of a “gong” — which is actually a length of finely tempered steel coiled around the outside of the movement — and two tiny, different-sized hammers, which strike it to indicate the time.

Instead of more conventional metals such as gold or platinum, the watch case is made entirely of titanium, chosen because its low density minimises any muffling. To further enhance the volume, the hour markers take the form of gill-like slits in the dial that increase resonance and optimise the sound from within.

A push-piece located at the nine o’clock position is used to activate the “decimal” minute repeater mechanism. First, it strikes the number of hours on a single hammer; then each hammer strikes consecutively to indicate the time past the hour (each strike represents 10 minutes); finally, the mechanism reverts to a single hammer that sounds any leftover minutes.

Perhaps the most impressive aspect of the Octo Finissimo Minute Repeater, however, is that it wears its abilities lightly and appears, to non-horophiles, to be nothing more than a rather understated wristwatch. But those prepared to spend £123,000 for one of the 50 examples being made will surely know different. 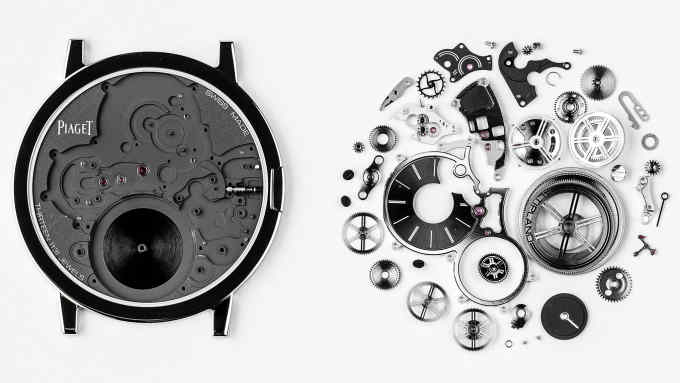