“Ever since I was tiny, when painting jobs came along they were always passed along to me,” says British artist Sophie Coryndon, whose father and grandfather showed her how to carve and draw as a little girl. By the age of six, she was using tools including chisels and lathes, and as a teenager she was restoring painted clock faces and ship’s chests.

Life has long revolved around the workshop of her father Nick Coryndon, the master cabinetmaker, antique restorer and paterfamilias of the family firm Coryndon. “I remember a set of drawers that was full of materials – veneer, shagreen and pieces of tortoiseshell,” she says. “I saw them as treasures and wanted to collect them and make something out of them.”

It is from such materials that Wiltshire-based Nick and his team of 14 fellow craftspeople create bespoke and historic reproductions, specialising in Tudor and late English furniture – what Sophie terms “the antiques of the future”. Their work is marked out by its hand-drawn quality, something that’s increasingly rare in a world where the term cabinetmaker has been so diluted that it’s used to describe the average kitchen joiner. “Everything is done by hand,” explains Nick, who works with draughtsman pencils and Rotring pens on large sheets of cartridge paper. “That’s why people come to us. They like the fact that an idea has gone from someone’s mind and onto the page.”

Sophie’s formative experiences have gone on to shape her artistic evolution from furniture finisher at the family business to botanical painter to mastermind of the wondrous and mind-bogglingly intricate reliefs and installations she creates today. Her time in the workshop ignited a forensic fascination with surfaces. “A lacquered screen would come in and be stripped back for restoration and you’d see how all the different layers were built up to create the finished piece,” she recalls.

Consequently, her artworks draw inspiration from cabinetmaking and historical objects. Following 15 years spent as an artist, Sophie began to incorporate an extraordinary artillery of decorative techniques learnt on the workshop floor into her creative process, and experimented with everything from Japanese lacquer work, marquetry, lost wax casting, etching, pen work and gold work. Her creative quest, she says, is to gently pull these associated craft skills into the 21st century – and her father has joined her on that journey, each working in their own sphere, but taking the chance to collaborate whenever the opportunity presents itself.

I come with a drawing, he puts his head in his hands, then very quickly works out the practical elements”

One of Coryndon’s latest projects, the interior of Crosby Hall, a vast private home on the banks of the Thames, has provided one such opportunity. “It’s a very swanky Renaissance English palace that’s housed everyone from Richard III to Catherine of Aragon,” Nick says. “It takes around two to three years to complete a single room.” From libraries to billiards rooms, everything is being carved, constructed and decorated in an English Renaissance style that echoes the owner’s vast collection of Tudor and Elizabethan furniture. The father-daughter partnership here works thus: Nick constructs and Sophie decorates – in this case painting a series of 20 heraldic shields featuring the coats of arms of prominent figures of the day, including Thomas More, which will adorn the walls of the Great Hall.

Remnants of their ongoing labours are scattered around Sophie’s converted barn in East Sussex: the objects rest on tabletops surrounded by versions of the dark botanical carved wall hangings that helped cement her name as an artist. The eye is drawn to a wooden baton intricately carved with flowers on a workbench, leaving one to ponder whether it is destined to become part of the balustrade of a sweeping staircase or a finishing flourish on a centrepiece table.

In fact, the pair have been hard at work in their respective homes during the pandemic. Earlier this year, Sophie launched a collection with Lulu Lytle at Soane Britain, offering a series of printed fabrics and wallpapers inspired by their shared love of antique textiles, including ecclesiastical robes. Nick, of course, had a part to play in the project and was tasked with hand-turning the original set of prototype Apothecary tulipwood lamp bases – modelled after 14th- and 15th-century apothecary jars and made to order. Sophie is currently in the throes of painstakingly hand-painting each limited edition with six botanical and geometric patterns.

Indeed, the father-daughter’s opportune collaborations can take many forms. Sophie’s love of medieval millefleurs, specifically the Lady and the Unicorn Tapestries, gave rise to Harvest Moon, one of 12 large poplar panels in the 2019 series (created, again, by Nick) covered with gessoed linen and decked with an array of native British flowers and insects. From wild strawberries to periwinkles to common blue butterflies, each one sculpted from clay and cast in Jesmonite before being gilded and tinted and carefully pinned into position. The work is typical of her complex, cerebral and highly nuanced creative output – and the behind-the-scenes support, in any small way, provided by her father.

“What I do is definitely not purely craft, purely design or purely fine art,” says Sophie pointing to another current residential project bringing the two together – a hallway cabinet, which has been designed by Studio Reed, made by Coryndon, and is being elaborately decorated to evoke the background of an altarpiece by the Renaissance painter Fra Angelico. It will be set with raised gold florets, each one with white-gold petals and 23-carat-gold centrepieces to create a dreamy carpet of wildflowers and butterflies.

The creative exchange between Nick and Sophie typically plays out as follows: “I come with a drawing, he puts his head in his hands, then very quickly works out the practical elements.” If the tools to realise her vision don’t exist, Nick will create them. It’s his lateral thinking and ability to work through ideas that Sophie most often utilises in her own work. “If I get stuck on something, which I frequently do, he always has a way of making things work,” she says. “He has an encyclopedic brain, and is incredibly good at working through problems on paper.” 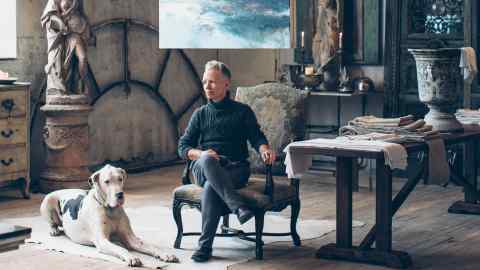 Though he may consider some of her concepts outré, and her tastes are often simpler and more contemporary than his own, it’s clear she pushes Nick to the outer edges of his capacity. “There are things that I do for Sophie that I wouldn’t have dreamt were possible,” he says. “She has some extraordinary abilities – and a mind like porridge so there are always these ideas she’s determined to realise that come out years later. It’s the Coryndon obstinacy.” She has no intention of relenting any time soon. “I’d like to think that I haven’t pushed you to your limits yet,” she says.

Beyond sheer practicality, it’s her father’s unerring belief that has kept Sophie on her creative path. “He has never questioned that I’m an artist or told me to get a proper job,” she says. Theirs is a relationship founded on mutual admiration and their homes are filled with one another’s work. His plaster maquette of a hand, created in his early days as a sculptor, sits in pride of place on her desk. “I call it the hand of God,” she says. “But I make him hold my pencils for me.”