Standard Life Aberdeen suffered a 30 per cent fall in profits in the first half of the year as heavy outflows linked to its lost business with Lloyds Banking Group and the market turmoil unleashed by the coronavirus pandemic took their toll.

The UK’s second-largest asset manager reported adjusted pre-tax profit of £195m, well below the £280m posted for the same period last year, as net client withdrawals totalling £24.8bn caused its fee revenues to drop by 13 per cent. Assets under management and administration fell from £544.6bn to £511.8bn at the end of June.

SLA reported an IFRS pre-tax loss from continuing operations of £498m, compared with a £629m profit the previous year, which came after the group was hit by a £915m goodwill impairment charge. In a clear sign of the risks posed to the asset manager by the pandemic-induced market turmoil, the writedown reflected the impact of the falls in equity prices and investors’ rush to the safety of cash on the value of SLA’s business.

“There is no question that the impact of Covid-19 has played a role on our results today, and across our industry, particularly in relation to lower revenue,” said SLA’s outgoing chief executive Keith Skeoch.

He added that despite the “exceptional circumstances” created by the pandemic, SLA’s performance had been “resilient”. The Edinburgh-based company maintained its interim dividend of 7.3p and its shares rose 0.7 per cent.

Presenting his last set of results before the arrival of new chief executive Stephen Bird, Mr Skeoch issued a stark warning about the “tough and uncertain” outlook for the economy and financial markets in the wake of the pandemic.

“The long-term consequences of the crisis will be profound,” he said, noting that the world was “yet to see the full impact of lockdowns or of high unemployment” and that the economic recovery would likely be W-shaped in the absence of a vaccine.

Mr Skeoch said that while SLA as a large investor wanted to “play our part” in providing funding to companies, the fund house would be “considered and choosy” in the way it deploys capital, steering clear of groups that are highly leveraged. “There are going to be companies that won’t survive these tough conditions,” he said.

SLA’s first-half revenue drop was partly driven by investors moving into lower-margin cash-like products as a result of the volatility triggered by the pandemic.

Another factor was the withdrawal of a tranche of money previously run for Lloyds Banking Group, which chose to end its relationship with SLA in 2018. The transfer made up the bulk of the asset manager’s net outflows in the first half of 2020.

But SLA also reported some positive developments, including a slowing in overall outflows. Excluding the Lloyds withdrawal, SLA recorded its lowest redemptions since its 2017 merger and posted marginal inflows of £100m on a net basis.

Mr Skeoch said SLA was “past the worst” of the heavy client withdrawals that had dogged it since the much-maligned merger of Aberdeen Asset Management and Standard Life Investments.

However, Credit Suisse analyst Haley Tam warned of a “challenging” fund flow and profitability outlook for SLA, noting that even excluding the Lloyds withdrawal, the group’s fund sales were “lacklustre”.

News in-depthFinancial services
Beyond the Keith and Martin show: can Standard Life Aberdeen be revived? 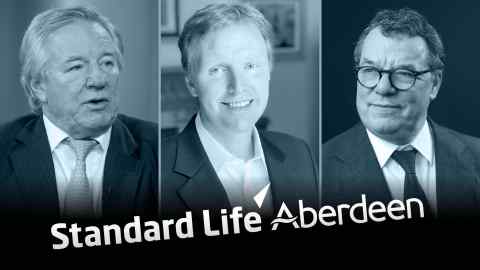 The results come as investors await to hear Mr Bird’s strategy for turning the group round. One important issue for shareholders will be the company’s dividend, which is not covered by operating cash flow. Alasdair Ronald of wealth manager Brewin Dolphin said the sustainability of SLA’s dividend “remains a concern”.

But SLA chief financial officer Stephanie Bruce pointed to the strength of the balance sheet and said the asset manager was “very mindful of the importance of the dividend to vast parts of our shareholder base with regards to income, particularly at times such as these”.

Mr Skeoch is expected to be named interim chairman of Britain’s audit watchdog later this month. He declined to comment on that.

Get alerts on Abrdn Plc when a new story is published