All eyes on the skies, from Mexico’s Riviera Maya to Swedish Lapland – via Namibia, the Maldives and the Southern Ocean

Lapping up the aurora borealis in Sweden

Swedish Lapland is known for having the clearest skies and best star-spotting in Scandinavia, and is home to multiple sky stations. Crosshatched with river systems that carve the landscape into thousands of islands, it’s a magical place – not to mention an up-and-comer on the global food scene: it will host Stars du Nord, a sustainable food festival showcasing Michelin chefs, in October. So if you like your astronomy with a side of rare kalix löjrom caviar and foraged juniper berries, you’ve found your place. Then there’s Treehotel at Harads, which is an attraction in and of itself.

It’s what it says on the tin: a hotel comprised of eight treehouses – designed by top architects, among them Thomas Sandell, Bjarke Ingels and Snøhetta – each suspended above ground in a pine forest, each unique in shape and design. (The eighth accommodation, the Biosphere, designed to attract and house birdlife all along its exterior, was only added this month.) Save this one for the autumn: it never gets dark in summer, but in the colder months, you get the double act of squillions of points of light and the aurora borealis. treehotel.se, from SKr3,100 (about £250)

Night lights on the quiet side of the Mexican Riviera

Mexico’s Riviera Maya has developed at a rapid clip over the past several years, but that doesn’t mean there aren’t still stretches of its fine white sand beaches blessedly free of the bright lights of buzzy towns and resorts.

At Etéreo – part of the Auberge collection of hotels and resorts – which opened in December in the Kanai, north of Playa del Carmenthe clear night skies above influenced the concept on the ground: the resort’s 75 accommodations, which range from studios to three-bedroom penthouses for families, feature ample furnished “sky decks” – roof terraces with chaises for lying back and watching the show play out above. (That you’re also in proximity to an enormous wellness centre offering energy-manipulating therapies alongside facials and massages, as well as four restaurants, a contemporary art collection and the world’s second-largest coral reef, 250m offshore, doesn’t hurt.) aubergeresorts.com, from $1,299

Cape Otway, southwest of Melbourne, is one of the southernmost points in Australia – reaching down into the Southern Ocean, surrounded by primary littoral forest. In February 2020 the ultimate surrounded-by-nature accommodation debuted here on a 200-acre private estate. Sky Pods are architect-designed, self-contained suites with timber floors and open decks, big down-swaddled king beds, and floor-to-ceiling glass walls on three sides.

The property’s owners spent the last decade planting native species, including around 60,000 trees, and bringing the acreage back to its pre-farmed state. Koalas, wallabies, and myriad bird species live all around. Come nightfall, you understand how Otway got its reputation for having some of the continent’s clearest skies: the stars abound, with a treat for northern hemisphere dwellers: the Southern Cross is visible all year round. skypods.com.au, from A$395 (about £225), minimum 2-night stay

It has just under 3mn people on a land mass twice the size of California – we’ll entrust the light-pollution maths to you – and it abuts one of the planet’s designated International Dark Sky Places, the NamibRand Nature Reserve (whose skies are among the very darkest found anywhere). No wonder Namibia in general, and the Sossusvlei National Park in particular, attracts night-sky gazers from all over.

The experiences curated around stars are myriad here, from 12-day mobile star ‘“safaris” to resident astronomers and in-camp observatories. One of the best such facilities is at &Beyond’s Sossusvlei Desert Lodge – set in its own private reserve, and home to a Celestron CPC 1100 GPS computerised telescope and a squadron of astronomers from Africa, Australia and the US. If you care to keep gazing once you’re finished at the observatory, all of the suites have skylights above the beds. andbeyond.com, from about £580 per person sharing

Chasing the Milky Way in the Maldives

In the Maldives, everything, from the design to the cocktails, is a little bit extra (prices included, alas). So too stargazing: as in Namibia, observatories and telescopes abound at the better resorts here (with the two Soneva islands, Fushi and Jani, leading the way). This summer Milaidhoo Maldives, in the north of the beautiful Baa Atoll, launches an astronomy “retreat” programme.

Called Milkyway from the Maldives, it puts together several nights’ worth of star-lit and guided activities, from open-air spa treatments and suppers, to navigating a traditional dhoni sailboat by the stars, to a crash course in photographing the night skies. The whole has been conceived and will be led by Valerie Stimac, an astronomer and writer who authored Lonely Planet’s Dark Skies. milaidhoo.com, from $1,625 a night

Travelista
The rebirth of Hotel Chelsea – and three other legendary hotels 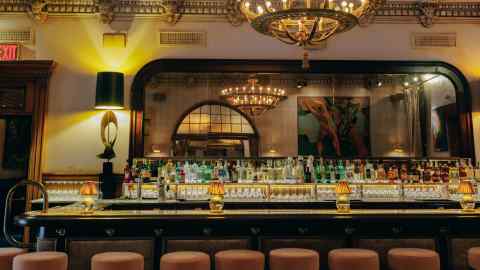