Vintage typewriters: the poetic allure of the ‘alphabet piano’

Tom Hanks loves a Hermes 3000. Leonard Cohen an Olivetti. And now everyone’s clamouring for a Corona

On 17 March, a week after announcing his positive test for Covid-19 while in Australia, Tom Hanks posted a health update on Instagram, alongside a photo of his Corona typewriter. “I travelled here with a typewriter, one I used to love,” he quipped. Weeks later, Hanks, the unofficial patron saint of typewriters, whose collection once peaked at over 250, sent that very same model to another Corona, a boy who was being bullied for his name.

Demand for Coronas has soared. In the period March-April, eBay UK saw a YoY increase in searches of 24 per cent. “Within the first few weeks of lockdown we had people calling, emailing, messaging us wanting to buy a Corona – as a memory, a symbol of this period,” says Joujou Saad of UK-based Mr & Mrs Vintage Typewriters. Saad and her husband, Walid – who meticulously restore and sell typewriters worldwide for between £150 and £3,600, depending on condition, typeface, colour, age and provenance – soon sold all 35 Coronas and Smith Coronas then in their inventory. “We wanted one for our personal collection – to keep in the living room as a memento – but the demand was so high.”

Corona aside, typewriters are enjoying a renaissance in popularity, from the first pre-1900 models to boxier 1980s styles, with Imperial, Royal, Remington, Smith Corona, Underwood, Olivetti, Olympia and Hermes the most attractive names. Anthony Barzilay Freund, editorial director and director of fine art at online vintage marketplace 1stdibs, reports a 30 per cent YoY growth in sales. Top pieces for sale include a c1935 Underwood in a rare Louis Vuitton Hemingway trunk (£42,595) and a collection of 15 midcentury examples (£2,930). “A typewriter is rich in nostalgia: for both the way it looks and the way it feels and sounds when used,” he says. “I think that multisensory aspect is one of the things younger buyers find appealing in this increasingly touchless, politely hushed digital age.” This, plus the fact that, off-grid and on-demand, a typewriter can’t be hacked. At the very least, owning an “alphabet piano”, as Kingsley Amis called it, is to preserve history: the last typewriter made in the UK – the Brother CM-1000 – came off the production line in November 2012.

Collectors typically fall into four tribes, says Walid Saad. First come the admirers of rare pre-1900s typewriters, including those by Sholes and Glidden (makers of the first commercially successful typewriter), Williams, Hammond, Remington and Hansen, who can pay up to £100,000. Second are the rare typeface and language hunters, focusing on languages such as Tamil, Tibetan and Georgian (£500-£3,600). The third is the design tribe looking for sets of models so they can compare design tweaks over the decades. Finally are those who are drawn to rare colours made in small numbers, such as the green Corona Special (Mr & Mrs has a well-restored example for £1,575).

“For me, they are functioning works of art,” says LA-based attorney Michael Fazio, whose collection includes an early 1900s Imperial Good Companion Model 1 with Hebrew typeface and an ultra-rare Williams Academy model, usually only seen on display in museums. “I leave them out around my house because people like to run their fingers over the keys.”

Gramercy Typewriter Co in New York is a mecca. Established in 1932 by Abraham Schweitzer, it is now in the hands of his son Paul and grandson Jay, described by fans as “the last OGs” of the typewriter world. Current gems include 1930s Royal Model Ps in red ($795) and a 1947 Remington Noiseless ($595). Like buying a musical instrument, “we always suggest going with the machine that feels best”, says Jay. “Each person has a different touch and tension with their fingers. Each machine has its own feel. One needs to be hands on to experience the differences.”

HTSI
How I Spend It: Withnail and I director Bruce Robinson on his passion for an old toolbox 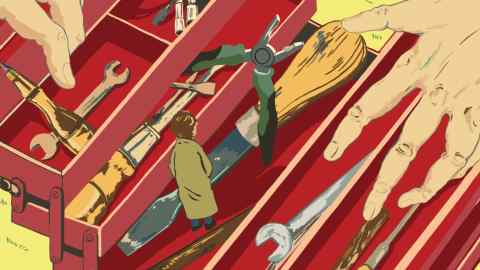 Typewriters with celebrity heritage are another thread with cachet. Ian Fleming’s 18ct-gold-plated c1952 Royal Quiet Deluxe (considered “the height of vulgarity” by his literary acquaintances) became the world’s most expensive when it sold at Christie’s for £55,750 in 1995. But generally, fans chase the models that their heroes were known to love: John Lennon fans lust after the 1951 Imperial Good Companion Model T, while Leonard Cohen devotees seek out the Olivetti Lettera 22 in a rare pistachio colour. So, while all but one David Bowie fan missed the chance to buy his red Olivetti Valentine at Sotheby’s in 2016 (sold for £45,000), identical models can be found at 1stdibs from £365.

As for the greatest typewriter of all time? On BBC Radio 4’s Desert Island Discs, Hanks, choosing his luxury, said: “If manual typewriters ever evolved to the absolute top, could never be improved, the state of the art, it was the Hermes 3000”.