Shhh…! Have you seen my secret room?

Two centuries ago, as the mob bayed for bread outside the Palace of Versailles, Marie Antoinette lay cowering in her bedchamber, waiting for her luck to change. Barefoot and brazen, she slipped into disguise and slid open a concealed door. When the mob reached her apartment a few minutes later, the queen was nowhere to be found.

Such secrecy has always existed in grand houses. In Marie Antoinette’s case, only a few close confidantes would have been privy to her escape route. “These passages were placed to facilitate an easy and convenient route from the ‘public’ areas – where many authorised members of the public were allowed to enter – to the strictly ‘private’ areas,” says Canadian-American photographer Robert Polidori, who captured the Palace and its secret doorways during its renovation in the early 1980s. Similar compartments were used to hide Catholic leaders during the reign of Elizabeth I; Jesuit architect Nicholas Owen made his name building them in staircases, under floorboards and between walls, most notably at Worcestershire’s Harvington Hall.

Arizona-based Steve Humble came to designing secret rooms as a college graduate, but his obsession with playful architecture has prevailed since boyhood, anchored in the twisting fireplace dramas of Indiana Jones and the clandestine caverns of Batman. After acquiring a ramshackle home with “a bunch of extra bedrooms” in 2004, Humble took it upon himself to create his own concealed doorway. Today he builds bespoke passageways under the banner of Creative Home Engineering for clients all over the world, with an average price tag of around $20,000.

How do you build a secret? Humble counts the ways: “Bookcases, of course, are the most popular. Then there are rotating fireplaces, grandfather clocks and pool tables that come out of the floor. Right now we’re working on three different phone booths where you dial a certain number and the back wall opens.” Similarly, in north London, a home refurbishment project for a film director saw interior designer Simone Suss conceal a cinema room, gym and office behind a James Bond film poster.

The trouble with secret rooms is that people want them to stay secret. John DeForest’s eponymous architectural studio has completed a dozen different hidden projects over the past few years – some for safety, some for pleasure – but most of them are totally classified. “So I won’t be a tease about them,” he says, but hints at rooms that store rare books, family heirlooms and special collections. Humble’s clients are also secretive, ranging from heads of state with multi-floor bomb shelters to “controversial figures” besieged by death threats. Mostly his job is to “make the doors”, but a few furtive glimpses beyond them have uncovered whole secret homes, subterranean museums, slides and shark tanks.

For author and journalist Derek Blasberg, the redesign of his Upper East Side apartment presented an opportunity to build a space to retreat to. “Like many design epiphanies, it came from a mix of practicality and imagination,” he says of his “cloffice”, a closet work space designed by German architect Yaiza Armbruster.

Blasberg, an insomniac whose partner prefers early nights (“another story for our therapist”), needed a way to access his desk without entering the master bedroom. His secret room is revealed at the touch of a button, which releases a magnet holding a door that otherwise appears to be a wall-mounted mirror, a piece inspired by Charlotte Perriand’s designs for a 1960s Les Arcs ski resort. The other side of this mirror-door is painted to match the wall colour (Farrow & Ball Cook’s Blue) of the hidden office, and is concealed within the room.

I love to surprise and delight, whether it’s secret sex rooms or hidden stairs

Other covert designs are purely practical, a hangover from Georgian architecture, which called for symmetry, balance and smoothness. San Francisco designers Landed, London-based Rachel Chudley and Ensemblier London’s Tara Craig have all worked on projects with secret bathrooms, where jib doors – flush-mounted entryways with minimal hardware – are camouflaged by wallpaper, panelling or bookcases.

The same impetus inspired Emma Burns, managing director of the firm Sibyl Colefax & John Fowler, when converting a barn into a book room at her house in Oxfordshire. “Unwilling to ruin the symmetry of the run of bookcases in my library but needing access to the bathroom behind it, my solution was to create a door within the bookcase,” she says, gleefully recalling a time that a guest returned to the main house, bemoaning the inconvenience of having to travel across the garden to find a bathroom.

When Cara Delevingne asked architect Nicolò Bini for a space to play “hide and seek” in her sprawling LA mansion, he’d already built her three full-scale bars and a David Lynch-inspired poker room. Bini’s creation, a pink velvet- and leather-lined “vagina tunnel” that exits through the door of a washing machine, has led Delevingne to dub Bini her “Mad Hatter”. “I love to surprise and delight,” says the architect. “Whether it’s secret sex rooms behind blind doors or hidden stairs behind cabinetry, the notion of a new dimension that you have to be ‘in the know’ to know has always appealed to me. What better way to entice your guests?”

Indeed, part of the attraction of hidden spaces is the knowledge that they exist at all. As Danielle Bobker, author of The Closet: The Eighteenth-Century Architecture of Intimacy, explains, the appeal of secret rooms is rooted in the enfilade, a suite of adjoining chambers with one lockable room – usually a closet – at the end of the series. It was here that kings and queens conducted their most private interactions; positioned as an area of covert intimacy, the closet became a space that many yearned to infiltrate. But the secret couldn’t be “so concealed as to not be known about”, says Bobker. “You need to have people aware that there’s something they don’t know.”

Perhaps that’s why so many secret rooms come with hidden clues. “Very often [owners] would have fun with the names of titles and authors on spines,” says Sarah Kay, a cultural heritage curator at the National Trust, of the bookshelves at Oxburgh Hall in Norfolk. “They would be a play on the name of the owner, their interests or the name of the place.” It’s a trend that’s seeped into the 21st century: one of DeForest’s favourite contractors builds “hidden cubbies” into their designs and leaves a clue as a housewarming gift. In another project by London designer Brandon Schubert, a bookshelf stuffed with games gestures to a hidden playroom.

For others the point is to deceive, obstruct and surprise. In Madrid, Gon Architects director Gonzalo Pardo designed his home with a secret washroom accessed through a closet built into the bath. Again, this playful approach is a historic one: at Attingham Estate in Shropshire, a circular boudoir is lined with three doors, only two of which allow access. “It’s a conceit, it’s an illusion, it’s playfulness – a way of showing off,” says Kay. DeForest’s interpretation is to hide a concealed door behind another one. “You’re admitted into the secret room, and isn’t that sort of exciting?” he says. “And by the way, here’s another that leads somewhere else.”

Both Humble and DeForest say interest in secret spaces is growing. “There’s a lot of people who really value the feeling of being prepared, especially if they can afford to be.” Prepared for what? Humble doesn’t specify, but whispers of nuclear bomb shelters hint at a grim future. For DeForest, the answer is more positive: “Recently, people have spent a lot more time at home thinking about what home means, what’s special to them and searching for creative outlets.” 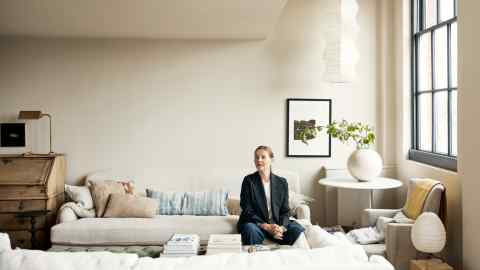 A handful of lucky homeowners will buy properties with secrets already installed: Savills is selling a castle in Angus, Scotland with a secret door in the drawing room for offers over £3mn. But the price tag doesn’t have to be so hefty. Hong Kong-based Sim-Plex Design Studio builds trapdoor-style compartments that hide cupboards, tables and extra bedrooms. “We have a lot of customers who are everyday people,” affirms Humble, who has a second business, The Hidden Door Store, that offers jib and murphy doors from $2,000.

“Everybody has these impulses,” adds DeForest of the desire for hidden spaces. “It doesn’t have to be crazy and indulgent. It’s just, wouldn’t this be fun? That’s the spirit that spans all sizes and types of projects.” Where would you build yours?