The steel column stands in a cavernous training hall in Astoria, Queens, at 35 feet high. There are no handles and only those able to scramble up its full height in 40 seconds to ring a bell at the top, and safely make their way back down, will make the grade. Each hopeful gets three tries.

“I did it in 27 seconds,” says Kasia Sznel, a third-year apprentice structural ironworker. This nimble strength helped Sznel join Local 40, a union of ironworkers in New York City. It is one of the US’s most competitive unions to get into, particularly for women — they make up just 90 of its 1,800 members.

Ironworkers build the metal frames for the city’s tallest buildings, and renovate or repair older structures and bridges. Local 40 only opens applications every two years and receives 3,800 to 4,800 hopefuls for 200 spots, according to Bryan Brady II, director of training for Local 40 and Local 361, another ironworker union in the city. Applicants line the street outside the union hall for days in advance of the application process opening.

High wages are a big part of the union’s appeal. After qualifying, ironwork remains a rare industry where employees without a university degree can earn a middle-class income — $50,000 to $100,000 or more, according to Brady. The apprentice wage starts at $29 per hour, rising to a top wage of $57 per hour, and workers enjoy a range of benefits, including a pension and health insurance.

Joshua Freeman, professor of history at City University of New York and author of several books on US labour history, says that these jobs are highly paid, but sometimes work is not available for everyone.

The union has relationships with local construction companies and members compete for jobs. Those with certifications — such as welding, rigging or tower crane skills — can win out over those with fewer skills or experience. Ironworkers are only paid when working. Once a job finishes, they have to find another.

Sznel was lucky, as she worked for almost three full years on one site and now, at 31, has started house-hunting with her mother — something out of reach for many Americans of her age who are burdened by stagnant wages and student debt.

The initial stage in the Local 40 application is a written test, where hopefuls must answer 20 questions (some maths, some reading comprehension) in 20 minutes. Those who perform best move on to the next stage. “We’ll call several hundred in to take the physical test,” says Brady, who was an ironworker for 38 years. Among the challenges, applicants scale the column and lift about 900kg of steel into the air using a chain hoist — all skills needed for the job.

“We work outside 12 months of the year and seven days a week,” says Brady.

“I think I’ve got frostbite in my foot,” says Aleshandra Fernandes. Her cheeks are pink with windburn from working in freezing temperatures on bridges around the city. She wears thermal underwear, lined trousers, a heated vest, gloves and insoles in her battered leather work boots. But the cold strikes deep.

“It’s not an easy job to say the least,” she says. But Fernandes, 30, loves the work and the security is a far cry from how she spent her 20s, travelling the country in a van, working as a bartender and as an art handler.

Fernandes grew up in the Hamptons on Long Island. As the daughter of an immigrant with his own construction company, she dreamt of “being something like a doctor or lawyer” she says. “But school was hard . . . When I found out that I could make the same money as a lawyer doing something with my hands, I jumped on it. It’s not as easy as sitting at a desk in a warm office but it’s really rewarding when I drive past something I built that will be there after I am gone.”

Working thousands of feet above the city offers spectacular views, but there are dangers. New York City law forbids some exterior work when the wind blows above 30 miles per hour. Brady says 600 hours of classroom instruction and 4,000 hours of on-the-job training ensure everyone knows how to stay safe. “They’re professional. They can feel when the wind’s coming and they’ll sit down.”

Everyone is partnered up, and trust between the pair is essential, says Fernandes. “One wrong move on their part, you could lose a finger or worse. It’s definitely a job that you have to be mentally aware of your surroundings at all times.”

She notes that the weather or a task will test you every day. “You’re covered in bruises from bumping into steel, and you’re tired on the drive home. You’re cold, you’re hot. It’s a very dirty job too — you’re covered in dirt, oil, bird shit.”

Sznel and Fernandes take pride in their work. Both are now used to hefting the “helldog”, a heavy pneumatic drill, and lugging tanks of acetylene or oxygen up and down frames. “The men in this union respect you really fast when they see how you work. And that you don’t need or want special treatment,” Fernandes says. 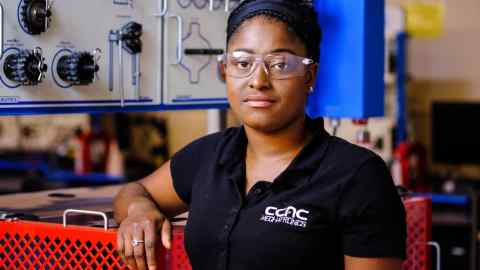 Indeed, both women wish more would join them. A local programme, non-traditional Employment for Women (New), helps to attract New York City women to building trades. It was founded in 1978 and, over the past decade, has placed more than 3,000 women as carpenters, electricians, ironworkers, labourers, and plumbers. While the construction industry overall remains only three per cent female, says Kate Krug, the organisation’s executive vice-president, New’s programmes are helping to swell their ranks.

Brady also hopes to attract more women to Local 40, using social media and outreach to local high schools. But ironwork, of all the building trades, remains the least-known and least visible. Heroic images of Rosie the Riveter from the second world war are long lost.

Joshua Freeman believes the loss of vocational schools also means children are not “pointed in that direction”. “There’s certainly a false narrative that good work requires a college education.”

Fernandes and Sznel relish their special brand of workplace solidarity. “I love the men I work with,” says Fernandes. “I laugh with them every day. We share stories of our lives at lunch and joke at coffee break, give each other nicknames. We’re all in it together.”