Emerging market stocks and bonds are staging a strong rebound as hopes that China will loosen its Covid-19 curbs and a dollar sell-off have helped relieve some of the pressure on developing economies.

JPMorgan’s broad gauge of dollar-denominated emerging market debt climbed 7.6 per cent in November, its best month since 1998, while equities tracked by MSCI’s EM index rallied 14.6 per cent in US dollar terms, the biggest rise since 2009.

Remarks from Federal Reserve chair Jay Powell on Wednesday signalling the US central bank would slow the pace of interest rate rises in December also delivered a last-minute boost for both gauges on the final day of the month.

The bumper gains have come as investors respond to signs that this year’s rapid interest rate rises in developed economies are set to slow. Data showing that US inflation fell more than expected in October triggered a rally in bonds and equities of all stripes, but emerging assets have performed particularly well.

“It does seem like the Federal Reserve may stop hiking interest rates, which has led to inflows into emerging markets,” said David Hauner, head of emerging market strategy and economics at Bank of America. “Things get priced in ahead of time, and there’s a fear-of-missing-out effect when people start to see prices moving.”

Rising interest rates in the US and Europe have triggered record outflows from emerging market assets this year — bonds have fallen 18 per cent on a total return basis year to date, while equity prices have slipped 21 per cent — but there are signs the tide is beginning to turn. In mid-November, a small weekly inflow into emerging world debt interrupted a string of outflows stretching back to August, according to JPMorgan’s analysis of data from EPFR, a research company.

Figures from the bank show $85bn have flowed out of EM bond funds this year, the biggest annual total since measurements began in 2005.

“The big outflows seem to have stopped,” said Viktor Szabo, an emerging market debt portfolio manager at Abrdn. “This is a market that for months has been beaten up with low liquidity, so when you finally have some buyers coming in, that’s going to make a big impact.” 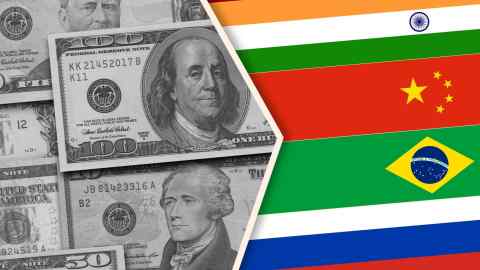 The dollar’s ascent in 2022, which at its September peak was up more than 19 per cent against a basket of peers, made it tougher for emerging economies that have borrowed in the US currency to service their debts. The moves pushed a swath of countries to the brink of default and forced the likes of Sri Lanka to restructure their debts.

A wave of investor optimism that China could relax the zero-Covid policies that have held back economic growth further bolstered the equity and bond rallies.

Although Chinese growth is still expected to be slow, widespread protests and a government vaccination drive for the elderly population have fuelled hopes that draconian Covid curbs will be relaxed.

“The consensus is that the restrictions in place will ease over the next four to six months . . . from my perspective, bottlenecks have been easing and shouldn’t be a problem six months from now, due to Covid at least,” said Uday Patnaik, head of emerging market debt at Legal & General Investment Management.

However, global growth is still expected to cool, with the US and Europe forecast to enter a recession and Latin America’s growth expected to slow to 1 per cent, according to BofA.

“There’s still plenty of uncertainty about how EM weathers the global recession next year,” said Szabo.