Greater private investment is essential to tackle the climate crisis

Last month, the Chinese government instructed the country’s coal mines to “produce as much coal as possible”. The injunction came after weeks of power shortages forced the government to ration electricity at peak times and factories to stop production. Industrial production plummeted in response.

China is the largest producer and consumer of coal in the world. Its demand for energy is huge — and rising. And it is not alone. The OECD, a group of mostly rich nations, estimates that at least $35tn of investment is needed by 2035 to meet rising energy requirements in non-OECD countries. Meeting this demand is critical for these countries’ economic development — and, without a vast increase in access to renewable energy, reliance on fossil fuels will only increase.

As the UK hosts COP26 this month, China’s decision is a stark reminder of reality. Its move to ramp up coal output comes only a few months after the authorities had imposed curbs to meet carbon emission reduction targets. For the diplomats and non-governmental organisations gathering in Glasgow, then, pushing for more investment into renewable energy must be a key aim.

Meeting the world’s energy needs will be a collective effort. It will require ambitious policy choices and public money, but also mobilising much more effectively the pools of private capital available for investment across the globe. Mark Carney, former governor of the Bank of England, and the UK prime minister’s finance adviser for COP26, refers to the commercial opportunities that climate change presents as “amazing” and “unprecedented”. But, if these opportunities are not seized, facilitated, and enabled by the decision makers at COP, the world will not get to net zero.

Pioneers in the investment industry are already taking advantage of these opportunities. Energy 4, a private equity fund managed by specialist asset manager Actis, aims to increase access to renewable energy for communities in low- and middle-income countries in Latin America, Africa and Asia. It does so by investing in electricity generation and distribution businesses while delivering risk-adjusted commercial private equity returns.

Demand to invest in the fund has been substantial. By mid-2017, it had exceeded its $2bn target size after seven months and hit its maximum fund size of $2.75bn four months after the initial close. Investors in Energy 4 include pension funds, insurance companies, endowments and sovereign wealth funds from across the globe.

Critically, the outcomes of the Actis fund are not just positive for the planet, but for the people inhabiting it. This is a key tool in the fight to address the climate crisis and for the future of green finance. To achieve widespread, global backing for the vast changes required to reverse climate change and biodiversity loss, the needs of the people most affected by them must be addressed. 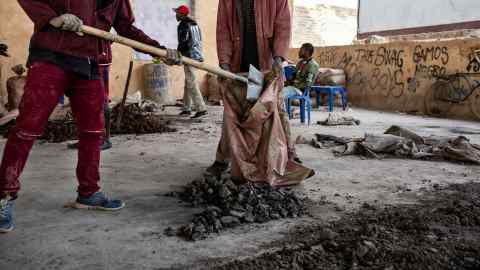 The transition to net zero has to be an inclusive and just one — because otherwise it simply won’t happen.

As part of a task force set up under the UK’s presidency of the G7 this year, the Impact Investing Institute is showcasing examples of investment vehicles, such as Energy 4, that deliver positive outcomes for people and the planet as well as a financial return.

Our work on the task force will provide practical tools for policymakers and investors so that a just transition approach can be integrated into public policy design and investment strategies. We look at what existing products could be adapted to integrate this approach and provide blueprints for investment vehicles across different asset classes.

FT News Briefing podcast11 min listen
COP26: a climate gathering like no other

Institutional investors will also be encouraged to work in more innovative vehicle structures by seeing what others are already doing in the market. This includes using blended finance and ways of leveraging grant or concessionary capital to work with private sector capital at scale. We believe just transition financing provides exciting opportunities for public and private investors to work more effectively together.

The G7 Impact Taskforce has allowed us to combine expertise and knowledge from a huge range of influential actors, from way beyond the small group of G7 countries themselves.

We have engaged with multilateral development banks, such as the World Bank, and the world’s largest money managers, such as Morgan Stanley. We believe that this consultation process is part of the bigger collaborative effort across the globe that is required to mobilise private finance in the fight to address the climate crisis.

All actors need to work together to achieve a just transition in the short time remaining to us. Hopefully, the collective commitments coming out of COP26 will make it easier for us to do so.

The writer is chief executive of the UK’s Impact Investing Institute, and a former business editor at the FT

As part of our coverage of COP26 we want to hear from you. Do you think carbon pricing is the key to tackling climate change? Tell us via a short survey. We will share some of the most interesting and thought provoking answers in our newsletters or an upcoming story.