From a Scottish yoga-sailing retreat to a Sardinian beach club

Dive into the Komodo Archipelago in Indonesia

Nirjhara resort, hidden away in the rice terraces north of Tanah Lot on Bali’s south-west coast, has been on our radar for months. Now it’s unveiled its “sister” proposition Vela – a six-cabin, handcrafted phinisi sailing boat that launches next month with a diving-and-disporting itinerary through the Komodo Archipelago. This has become one of the most plied bits of Indonesia, with private charters and even small cruise ships now in on the game; so creating an experience that still feels private to some degree is the challenge.

Vela’s journeys, which can also take in Sebayur – just outside the actual national park – look promising. So does Vela itself, with its Hermès and Dedar Milano fabrics, foredeck bar and spa terrace, with products from The Retreat, Nirjhara’s own wellness brand. From €12,000, full-board and inclusive of spa treatments and experiences

Ritz-Carlton takes to the waves

In Greece, another buzzy hotel-boat launch comes in August – this one attached to a much bigger brand flag. Evrima is the first of what will eventually be a three-yacht fleet from Ritz-Carlton hotels and resorts. The experience it proposes is along the lines of the small, ultra-luxe cruise model – Evrima is 190m, carries fewer than 300 passengers and will call in at Greek ports both familiar (Mykonos) and less known (Bozcaada). Its blue-water capabilities mean the Yacht Collection can ply the Mediterranean in the northern-hemisphere summer and St Barth’s or Aruba in winter (and offer transatlantic cruises). Concierge services will offer bespoke experiences for guests who want something beyond the extant half- and full-day excursions; so if there’s an artisan jeweller you’ve always been keen to meet in Costa Rica, let them sort it for you. This summer, it’s Athens to Istanbul via the social whirl of Patmos, the ancient ruins at Ephesus and the Ottoman fortifications at Kavala. From £5,020 per person for seven nights

At the other end of the experience spectrum is an intriguing (and far more elemental) proposition from a new outfit called Slow Adventure, every one of whose itineraries highlight rewilding and community-support initiatives (it also donates five per cent of all profits to its Slow Adventure Impact Fund, which targets wilderness and community regeneration projects in the destination you’re visiting).

Travelista
Greece is the word for summer holidays 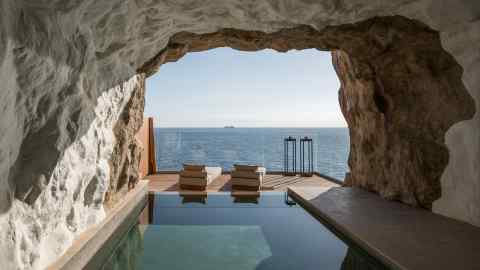 First among its excursions is a sail along the western coast of Scotland with a certified skipper/yoga instructor for five days of wild yoga, meditation, foraging and cooking – plus hoisting the mainsail, swabbing the deck and generally being a participant, not a spectator, in how you’re getting where you’re going. There will be a maximum of six guests per cruise, the course steered by the wind, the tides, and the long daylight hours. £1,360 per person for five nights

If the Scottish coast appeals, but the hoisting-swabbing elements less so, look to superlative Australian expedition operator Aurora, whose 79-cabin, eight-deck Greg Mortimer is sailing the country’s north coast on its inaugural UK voyages before repositioning in Svalbard for the Arctic season.

This ship is as expedition-class as they come (Aurora’s two-strong fleet comprises the first passenger vessels to utilise Ulstein X-Bow stabilisation, which makes for smooth sailing in big swells); so its recent tour of the Hebrides and Orkney islands had a focus on adventure and wilderness immersion (that’s where the Zodiacs and state-of-the-art kit come in handy). Similar itineraries are already available to book (and filling up) for next summer – some of which will be hosted by British TV-radio host, naturalist and scuba ace Miranda Krestovnikoff. From £8,185pp for 14 nights

And so to shore, where 7Pines, which already operates an all-suite resort on Ibiza, will next month make its debut in Baja Sardinia. The renovated resort is across the peninsula from Porto Cervo, easily accessible to, but at a healthy remove from, all the glittering shops and promenades (ideal).

It’s surrounded by more than 37 acres of empty brush and woodland, affording a bit of quiet and privacy on the island’s generally busy north coast (also ideal). There’s a beach and a beach club, 79 spare bright-white accommodations, an 800sq m wellness centre, and a small fleet of Pershing yachts for exploring the multitude of coves and nearby Maddalena archipelago (because suites and spas are all well and good, but the water is always the thing here). From €1,323