James Politi in Washington and Colby Smith in New York

The Federal Reserve moved one step closer to the day when it will start slowing its massive monetary support for the US economy, following a meeting of policymakers that highlighted both the promise and the perils of the American recovery.

At the end of a two-day meeting on Wednesday, the Federal Open Market Committee declared that it had made “progress” towards its goals of full employment and 2 per cent average inflation, even though it was not yet sufficient to merit any policy action right now.

The statement marked the first milestone in the US central bank’s steady drive towards a decision on reducing its $120bn in monthly debt purchases at future meetings, a move that could come later this year or early next year.

However, the central bank has said any such “tapering” would require additional improvements in the economy and Jay Powell, Fed chair, said there was more “ground to cover” before it acts.

“We expect further progress, and we expect that if things go well then we will reach that goal,” Powell said. “And when we reach it, and the committee is comfortable that we have reached it, then we’ll taper at that point.”

The FOMC meeting comes at a time of conflicting economic signals. Inflation has been much higher than expected since US central bank officials last met in June, while the spread of the Delta virus variant across the US has renewed concerns about the labour market and growth.

Powell acknowledged that there was more “upside risk” to the inflation outlook, but stuck to the Fed’s view that price pressures would eventually ease.

He also indicated that the Delta variant’s spread across the country might not have a particularly large economic impact, since Americans were less inclined to change their behaviour than they had been during earlier outbreaks.

But Powell did suggest the Fed still needed more time to look at the data, particularly on the employment side, to be sure that it gets the timing of any policy moves right.

“I think we’re a ways away from having had substantial further progress toward the maximum employment goal — I would want to see some strong job numbers,” he said.

Powell seemed confident that the labour market would heal fully when pandemic-related disruptions start to fade. “Generally speaking, Americans want to work and they’ll find their way,” he said.

Powell said Wednesday’s meeting featured the Fed’s first “deep dive” into issues related to the timing, pace and composition of the eventual tapering move — but he acknowledged that divisions remain about those critical jumping-off points. 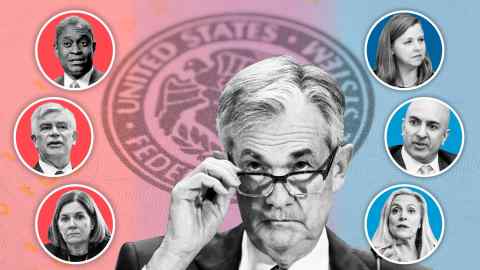 “There’s a range of views on what timing will be appropriate, and those views ultimately track back to people’s views about the economy and what will happen as we make progress towards our goals,” he said.

Kristina Hooper, chief global market strategist at Invesco, said: “Clearly, Jay Powell is balancing a Fed that is divided: there are clearly those in the hawkish camp and those in the dovish camp.

“This kind of monetary policy purgatory could last for a while if we are getting mixed messages [about the economy] and we have pandemic issues continuing.”

One closely watched debate on tapering is whether the Fed will trim its $80bn in monthly Treasury bond purchases or its $40bn in monthly mortgage-backed securities first. Some officials have suggested the Fed does not need to buy as many MBS given the strength of the US housing market.

Powell suggested the Fed had ruled out trimming MBS purchases earlier than Treasuries, but said one option was to reduce them more rapidly once the central bank does start tapering.

Recent gyrations in US government bond prices reflect in part concerns about the Delta variant and the potential hit to growth. Treasuries have rallied sharply in recent weeks even though Fed officials signalled last month an earlier lift-off in interest rates in their projections. Yields on the benchmark 10-year note, which move inversely to prices, slid again on Wednesday to 1.23 per cent.

“There is still a lot of uncertainty,” said Yvette Klevan, a fixed income portfolio manager at Lazard Asset Management. “Market participants are looking for some very precise forward-looking information from the Fed, and that is not going to happen. We just have to wait and see.”

Asked about the rally in government debt, Powell said there was not a “real consensus” on what was moving markets in that direction, quipping that some investors had pointed to “technical factors, which is where you put things that you can’t quite explain”.

But he dismissed any notion that investors were doubting the Fed’s commitment to sticking to its new monetary policy framework. “Our framework is pretty well understood and I think the real test of it will be down the road when it’s time to think about raising interest rates, and how we assess that set of issues,” he said.

The Fed also announced the establishment of two permanent facilities that would allow eligible domestic and foreign market participants to swap Treasuries and other short-term securities for cash — tools that had been endorsed this week by a group of heavyweight former policymakers as a way to ensure ample Treasury liquidity, especially during periods of stress.

Get alerts on Federal Reserve when a new story is published