David Sheppard in London and Derek Brower in New York

The global energy crisis deepened on Wednesday as a further rise in natural gas prices in Europe and the US threatened to push some of the world’s largest economies into recession.

Gas markets in Europe jumped 6 per cent on Wednesday to €236 a megawatt hour, taking the week’s gains so far to 14 per cent. The latest price was equivalent in energy terms to almost $400 a barrel of oil, as traders raced to secure supplies ahead of the winter. Prices have more than doubled from already extremely elevated levels since June.

With gas prices at more than 10 times their normal level, the possibility of a deep recession has grown, with investors now more downbeat on the German economy than at any time since the eurozone debt crisis a decade ago.

European gas prices are expected to remain near record levels or head even higher as winter approaches, with Berlin discussing the possibility of rationing gas use and governments from London to Madrid preparing to subsidise punishing utility bills.

Further price gains would increase the cost of supporting households, including in the UK where pressure has built for the next prime minister to potentially cap bills even if Russia completely severs supplies.

“With customers facing a potential complete Russian shut-off before winter even starts, there is little to stop this rally until we see significant demand destruction, probably meaning a deep recession. We’re not there yet.”

US gas markets remain much lower than in Europe thanks to its shale drilling boom over the past 15 years, but rising energy costs have helped trigger decades-high inflation, causing alarm in the White House.

Benchmark US gas had climbed more than 7 per cent for the week by Wednesday morning, to $9.40 a million British thermal units — close to levels that prevailed before the shale revolution.

Analysts said further increases could be expected in the coming months on both continents as demand rises, winter sets in and governments race to replace Russian energy in Europe.

In the UK, the benchmark contract for delivery in September has gained almost 17 per cent for the week to just under £5.15 a therm.

In mainland Europe, the benchmark gas price is the equivalent of almost $70 a million Btu, with record prices feeding through into electricity markets where prices have soared to six times the level of a year ago.

Metals company Nyrstar, which is controlled by commodities trading house Trafigura, said on Tuesday it would halt production indefinitely at one of Europe’s largest zinc smelters, becoming the latest industrial victim of the energy crisis. 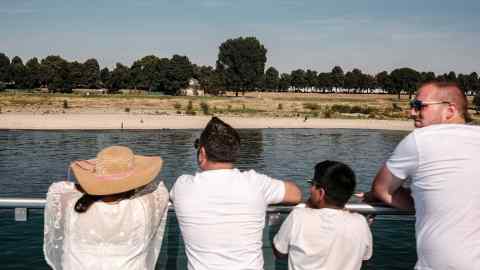 The price increase in the US followed data pointing to a recent slowdown in output from new shale oil and gas wells because of reduced drilling, bottlenecks in the pipeline network and rising production costs, said Peter Rosenthal at consultancy Energy Aspects.

“It’s a fundamental shift,” said Stephen Schork, editor of the energy market newsletter The Schork Report. More than a decade of cheap US natural gas “is now a bygone era”, he added.

US gas prices have risen as underground stockpiles have fallen to 12 per cent below average levels, drawn down in part by power plants burning more fuel to meet electricity demand during a hotter-than-normal summer.

Prices have increased even as Texas’s Freeport LNG export plant, one of the nation’s largest gas consumers, has been temporarily shut down after an explosion.

The restart of the freeport as soon as October would make more supplies available for Europe, potentially softening prices across the Atlantic but adding to demand in the US.