Emerging markets — where to put your money with Russia at war

Opportunities still exist in Asia, away from the uncertainty of China
Simon Edelsten

From the moment Russia’s tanks rolled across the Ukrainian border, the investment world changed. This is a war between two countries that mainly export commodities.

Russia is the world’s largest oil exporter — at the turn of the year it was producing 11.3mn barrels a day, according to the International Energy Agency. It was also the world’s biggest exporter of wheat. Ukraine is another major grain producer. It exported 48mn tons of corn and wheat last year, according to S&P Global’s estimates. Both countries share the same biggest market for their produce — China.

With trade to Russia and Ukraine virtually closed off, commodity prices have risen globally. When the price of fuel and food goes up this often heightens political risks in emerging markets, where these commodities are a big part of the daily budget of many households.

Wheat prices experienced a similar increase in 2010, when there were droughts in Russia and Ukraine and severe weather-related problems in other grain-producing countries. The Arab Spring followed. Rising food prices were not the only cause, but they helped tip political tension into uprisings.

To a global equity manager, emerging markets can offer excellent growth dynamics when conditions are fine. However, the history of investing in emerging markets is marked by occasional crises. Behind many of these is often a political story that begins beyond the borders of the countries affected.

So, for instance, there is a current risk of Russia not paying interest on its government debt. The last time this happened was in 1998 under Boris Yeltsin (the previous one being 1917 following the revolution). 1998 is a bleak year in the memory of emerging market investors as many Asian equity markets collapsed. The collapse probably owed more to Brazil and Mexico defaulting in previous years than to the Russian default, but all the same, a Russian default would stir memories.

Russia remains a small part of emerging market investing. At the start of this year it accounted for about 4 per cent of the index compared with China at 32 per cent, Taiwan 16 per cent, India 12 per cent, South Korea 12 per cent, Brazil just 5 per cent and others 22 per cent. China therefore rather dominates how much exposure an investor might currently choose in emerging markets — especially if you are a passive investor.

Even before the war in Ukraine, China was presenting difficulties for international investors. Just under a year ago I wrote explaining why my team had decided to sell all our fund’s Chinese investments. We had been monitoring how regulations had started to change in ways which might impede value creation for shareholders. We also noted that shareholders of the major technology companies — such as Alibaba and Tencent — were non-Chinese as the shares were listed outside the mainland and local investors could only invest locally. We were concerned this would lead to scrutiny from Beijing.

In November 2020, the public offering of Ant Financial, the fintech side of Alibaba, was cancelled at the last moment. This was expected to have been valued at over $35bn, so a red flag was raised.

Over the next few months, a broad range of regulations and some fines were announced, hitting the value of other Chinese stocks from food delivery to education to games companies.

Each announcement made good sense in terms of looking after the Chinese people, but many overseas investors inferred that the prospects for growth of China’s most popular listed stocks had been materially lowered. Share prices of targeted businesses plunged.

We would not be brave enough to predict that this shift in regulation has ended. Demographic factors arguably put pressure on Beijing to follow through with further action.

When I first started investing in China in 2002 there was an economic case to be made for creating manufacturing jobs in the coastal areas and allowing the population to leave the land for these more productive roles. Foreign investment made that possible and was encouraged. 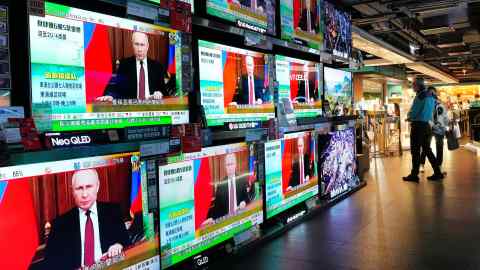 Two decades later, the one-child policy has left China with fewer young people to fill jobs and with a large ageing population. China does not need foreign investment; it needs money to pay for social security. That probably means higher taxes, and it is profitable companies most likely to be called upon.

So how has the Russian invasion of Ukraine affected China? It has sided with Russia, but has to date avoided being dragged into the conflict. Doubtless, Beijing has observed the effectiveness of Western sanctions on Moscow and noted how much worse such sanctions would affect their own economy.

Again, look at the trade data which highlight just how important a part of the global economy China is. It exported $2.7tn of goods in 2020, according the World Bank, and is the world’s biggest manufacturer of mobile phones, computers, office machinery and clothing. The US is by far its biggest market. Neither country wants a sudden cessation of trade.

How much risk does investing in China have for investors on balance? A good acid test is to ask yourself: “If you bought a share and found that your shareholders’ rights were being abused, would you expect the local courts to uphold your rights?” You might also ask: “How likely is the stock exchange to close or the local currency to be sharply devalued in time of stress?”

Very cautious investors will note that Russia closed its stock exchange as soon as the war started, effectively leaving western equity investments worthless. Some may recall many shares quoted on the Shanghai index being suspended for some weeks in 2018. The market had fallen sharply during trade disputes with the Trump administration in the US. Beijing currently seems to be trying to avoid a repeat of such a dispute. This is encouraging.

Indeed, some investors may be tempted by the very low valuations of Chinese companies. According to Bloomberg data, the Shanghai stock market trades on 15x this year’s earnings and Hong Kong 8x. The US stock market trades on 23x on the same basis. China’s economy is very likely to grow faster than that of the US over the next 20 years, probably with less inflation risk. So, in some eyes, current Chinese valuations offer an attractive “entry point”; and that may well be right.

I can dip out of China. Other markets in the region can give me exposure to the higher growth rates expected in Asia while allowing me to spread my holdings between different political environments

As a global equity manager, I have a wider range of options than managers specialising in specific regions or sectors. Though it is an important economy, I can dip out of China. Other markets in the region can give me exposure to the higher growth rates expected in Asia while allowing me to spread my holdings between different political environments. The South Korea Kospi index trades on 12x earnings and Taiwan on 14x earnings.

A few years ago the funds I run had 10 per cent of assets in China. Today we have a similar amount in South Korea and Taiwan, including Samsung and Taiwan Semiconductor, which are the largest stocks in each index.

We also have wider exposure to emerging markets through holdings in developed countries. Take, for example, Singapore Telecom, which has a controlling stake in the biggest mobile phone operators in Indonesia and Malaysia. This is a good illustration of the businesses we particularly like — resilient companies operating in “cockroach” industries from what we consider to be safe domiciles.

Investors cannot avoid risk, but often there are ways to help mitigate it.