Have you cracked for the canned wine craze?

These tinned vintages are way better than you think

In the world of canned drinks, what was once a category driven by convenience is now bursting with innovative cocktails, cutting-edge winemakers and luxury spirits. Recent reports have valued the canned market at £643mn, with a projected 13.4 per cent compound annual growth rate up to 2030.

At the crest of the wave is canned wine, a sustainable alternative to regular bottles – the lower weight of cans means fewer emissions are produced – that chills faster, is easily transportable and covers everything from sparkling reds to quirky skin contact blends. As Leslie Owensby, founder of canned wine brand Defy, says, “Cans are freedom – drink as much or as little as you want; take [them] wherever you want.” All the better if what’s inside is actually decent. Here are six intriguing brands to try…

The idea for newly launched Canetta emerged from an impromptu aperitivo hour: “The size of a can was well adapted to our desires and lifestyle,” says co-founder Luca Pronzato, a sommelier who likes to “drink well, but moderately”. Each can is equivalent to one and a half glasses of wine, the idea being to avoid opening a whole bottle. Pronzato is committed to natural varieties, and every release will spotlight a new winemaker. First up are the orange wines of Catalonia’s Francesc Boronat, a malvasia di Candia (marzipan, white flowers and rosemary) and a murkier cartoixa de Marina (red berries, garrigue and pink pepper). €26 for four 187ml cans; canetta.net

“It’s from Italy, it’s organic and it’s wet” – the intention of Defy is to take the pomp out of the wine industry. As its tagline suggests, the brand sources grapes from Abruzzo in southern Italy, offering a red, white and rosé in its core range. “I don’t use any wine terms when describing my wines,” says founder Leslie Owensby. “Hell, I don’t even talk about the grapes because most of my customers don’t care.” The result of such nonchalance is an unfussy line of quality organic wines, the current favourite being a tannic (but not unpleasant) frizzante red. £24 for four 250ml cans; defy.wine

Many canned wine brands position themselves as picnic drinks; Nomadica is different in that it aims to capture the “sommelier experience”. But don’t take it too seriously: founder Kristin Olszewski is about making wine accessible to a younger audience, sourcing flavour profiles that are “serious enough for a glass but vivacious enough to be sipped out of the can.” On top of the standard blends are two sparkling options: a grenache rosé and a citrussy blend of chardonnay and muscat. From $54 for eight 250ml cans; explorenomadica.com

Using grapes from all over California, Broc Cellars is best known for its bottles of spontaneously fermented natural wine. In 2019 the brand entered the canned drink market, offering 355ml versions of its “Love” label. Four approachable vintages are currently available: a white, a red, a rosé and a sparkling Chenin Blanc/Muscat. From $10 a 355ml can; broccellars.com

First released in 750ml glass bottles, these low-calorie spritzes are inspired by traditional aperitivos. Founders Oli Man and Alex Beausire – a former bartender and a “design wizz” – use organic white wine from France’s Château Saint-Cyrgues vineyard to create low-calorie riffs on Venetian Bellinis and northern Italian bitters. At 6 per cent abv, both lend themselves perfectly to summer drinking – particularly when served in the brand’s new grab-and-go cans. £14 for four 250ml cans; thesedaysdrinks.com

Co-founder Jack Green spent 10 years as a drinks buyer before taking the plunge into winemaking. Spotlighting the wines of north-west Sicily, Vinca makes a crisp catarratto, a pale pink syrah and an amiable blend of Nero d’Avola and Frappato. Rumour has it that Ed Sheeran insists on having Vinca in his dressing room, a selling point that has helped propel orders from “all around the world”. From £20 for six 187ml cans; vincawine.com 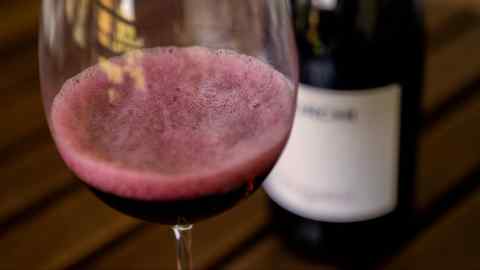