We’ll send you a myFT Daily Digest email rounding up the latest Supreme Court US news every morning.

US president Joe Biden announced on Friday he would nominate federal judge Ketanji Brown Jackson to the Supreme Court, saying she is “one of our nation’s brightest legal minds and will be an exceptional justice”.

Jackson would, if confirmed, fill a vacancy at the country’s highest court left by the retirement of Justice Stephen Breyer, who last month said he would step aside at the end of the court’s current term, typically in late June or early July, assuming his successor had been nominated and confirmed.

Biden on Friday said Jackson would “bring to the Supreme Court an independent mind, uncompromising integrity with a strong moral compass and the courage to stand up for what she thinks is right”. He also noted the timing of the nomination, as “we watch freedom and liberty under attack abroad”, referencing Russia’s attack on Ukraine.

In nominating Jackson, a federal appeals court judge in the District of Columbia, Biden has made good on his commitment to pick a black woman to sit on the Supreme Court if a vacancy arose during his mandate, a promise he first made as a candidate for president.

“For too long our government, our courts, haven’t looked like America,” Biden said. “I believe it’s time that we have a court [that] reflects the full talents and greatness of our nation with a nominee of extraordinary qualifications.”

Jackson on Friday said she was “truly humbled” by the nomination and hoped that, if confirmed, her “commitment to upholding the rule of law and the sacred principles upon which this great nation was founded, will inspire future generations of Americans”.

Jackson’s legal career has spanned Harvard Law School and clerking for Breyer on the Supreme Court to private practice and a role as a federal public defender.

Democratic lawmakers largely applauded the appointment. Chuck Schumer, the Democratic Senate majority leader, said he expected to move quickly to schedule a confirmation hearing and subsequent vote in the Senate on her nomination. Presidents have the power to nominate Supreme Court justices, but their nominations are vetted by the Senate judiciary committee and must be confirmed in a simple majority vote in the upper chamber of Congress.

“I have no doubt that Judge Jackson would make an outstanding Supreme Court justice. Judge Ketanji Brown Jackson has been confirmed by the United States Senate on a bipartisan basis three times and I expect she will again earn bipartisan support in the Senate,” Schumer said.

In addition to her confirmation to the DC appeals court, the Senate had also previously approved Jackson as a member of the US sentencing commission, the judicial agency that develops federal sentencing policy, and a federal district court judgeship.

The nomination represents Biden’s first, and potentially only, chance to make his mark on the Supreme Court during his presidency. If confirmed, Jackson’s appointment would not alter the bench’s ideological make-up, which is split 6-3 between conservative and liberal justices.

Black leaders celebrated Jackson’s historic nomination. “She would bring the court a distinct and increasingly indispensable perspective on how the laws of this land affect a vital and all-too-often neglected segment of our population,” said Jennifer Jones Austin, vice-chair at the National Action Network.

Her confirmation process could be fraught, however, as the nomination of federal judges has grown increasingly partisan in recent years.

“Senate Republicans believe the court and the country deserve better than Senate Democrats’ routine of baseless smears and shameless distortions,” Mitch McConnell, the Senate’s top Republican, said on Friday. “The Senate must conduct a rigorous, exhaustive review of Judge Jackson’s nomination as befits a lifetime appointment to our highest court.” 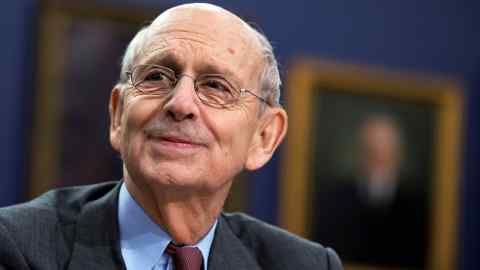 But some court watchers have said that Jackson’s confirmation just last year by a bipartisan Senate vote to the federal appeals court in Washington DC — widely seen as the second-most important court in the country — could give her a critical advantage.

Biden said he sought the advice of Democratic and Republican senators before announcing Jackson’s nomination, adding he hoped those involved in the confirmation process “will move promptly”.

Three Republicans — Lindsey Graham, Susan Collins and Lisa Murkowski — voted with all of the Democrats last year to confirm Jackson to the appeals court.

Collins on Friday called Jackson “an experienced federal judge with impressive academic and legal credentials”. Graham, who had pushed for Michelle Childs, a federal trial court judge from his home state of South Carolina, to be the president’s Supreme Court pick, expressed disappointment, saying the “radical left” had “won President Biden over yet again”.

Tim Scott, the other Republican senator from South Carolina, echoed Graham’s comments, saying he was “disappointed” with Biden’s choice.