‘I feel left behind’: graduates struggle to secure good jobs

For Felix, trying to find a job is a “complete grind”. The London-based graduate, who prefers to give only his first name, says he is neglecting university work in order to write cover letters and complete assessments. The “lack of feedback from the (many) rejections leads to a pretty vicious cycle. Often companies simply blank you instead of a rejection email.”

After he found conventional routes proved stressful and unsuccessful, he focused on cold-emailing and eventually received an offer. “[It] appears a game of luck and numbers,” he says. “The graduate job market is absolutely flooded, as is that of postgrad applications.”

Like other 2021 graduates, Felix is entering a global jobs market where there are fewer opportunities and increased competition. He was one of more than 70 who provided detailed responses to a Financial Times survey about graduating in the pandemic.

Many respondents, including those who have graduated from top institutions such as the London School of Economics, the University of Cambridge and University College Dublin, described their struggles in securing entry-level positions. They also highlighted that they are competing with 2020 graduates who lost out when graduate programmes were suspended.

A vast majority of respondents felt there were fewer job opportunities available for graduates. Many of their personal experiences highlighted a hyper-competitive jobs market, which can be demoralising and demotivating.

Many also felt they had not found a job that met their career aspirations, and had to take a position with a lower salary than expected. About half felt that the pandemic has set back their early career prospects.

However, while more than a third felt they had been forced to change the direction of their career as a result of the pandemic, they thought the outcome was not necessarily a negative one.

A graduate from the LSE, who preferred not to be named, said that finding a job was “a struggle”. “Despite being highly qualified, you are competing against people that graduated a few years ago but still apply to [do] the same jobs as you because they could not find better. And you cannot really compete because they have experience which you don’t have as a young graduate.”

In the UK, of those that graduated during the pandemic 29 per cent of final year students lost their jobs, 26 per cent lost their internships and 28 per cent had their graduate job offer deferred or rescinded, according to research from Prospects, a specialist graduate careers organisation.

Meanwhile, those who run substantial graduate schemes have reported significant increases in the number of applicants for this year’s intake.

Unilever, the consumer goods company, recruits graduates across 53 countries and saw a 27 per cent increase in applications from 2019 to 2020.

Compounding the problem further is the increasing number of entry-level jobs that require work experience. Even before the pandemic, 61 per cent of entry level positions in the US required three or more years of work experience, according to a 2018 analysis by TalentWorks, a job-matching software company.

My academic achievements are something I pride myself on, yet the job market seems to disregard them completely

Some students feel the application process for some companies is becoming increasingly arduous. James Bevington, who has recently finished a PhD in chemical engineering at the University of New South Wales in Sydney, Australia, says: “When the power dynamics are so skewed against you with hundreds of applications per role, the recruitment process can become abusive.”

He describes how on submitting an application he was given two days to undertake a 24-hour assessment for which he had to drop everything. He had no opportunity to ask basic questions about the company and only received an automated rejection after getting a perfect score on the assessment. “Why bother?” he says.

A London-based engineering graduate, who preferred not to be named, says: “Up until now I have 230+ failed applications for entry-level jobs. Having graduated [in] computer science, I now add income to my family as a delivery driver in between applying for different jobs and trying to muster the motivation to keep going. I feel left behind, not only by the job market, but by the institutions that offered my education — my academic achievements are something I pride myself on, yet the job market seems to disregard them completely.”

Another recurrent theme was that some who have secured employment are in fact curious about exploring other opportunities, but the uncertainty means they are reluctant to leave their current employer and try a different role at another company. Finding secure work was more important than finding fulfilling work.

Another London-based graduate, who preferred not to be named, had secured a job in an investment bank but had quickly decided it was not for them and would like to switch career. But “it’s hard finding different opportunities . . . And it’s easier to stick to the safer, well-paid path than take a risk and end up redundant,” they said.

A law graduate from University College Dublin, currently based in Leuven, Belgium, following a masters at KU Leuven, who did not want to give his name, says: “The pandemic has impacted all of our anxiety levels but its disproportionate effects on workers has really made job security a priority for me, above finding work that is fulfilling and enjoyable.”

Elliot Keen, a graduate in civil engineering from Birmingham university who is now based in London, said that new entrants to the labour market may default back to a “job for life” rather than moving around: “I reckon people will stay in their roles for five, maybe 10 years or longer.”

Among those graduates who felt forced to take another direction, some outcomes have been positive.

Alex Morgan, who did a political economy MA at King’s College London following his undergraduate degree at Leeds, says the pandemic has “perversely helped me”. He decided to pursue postgraduate education “because the graduate jobs market felt so dysfunctional” last year. Following his MA, he secured a job with the civil service. He had not planned to do an MA and adds: “I don’t think I would have been able to secure this sort of job without it.”

It seems many other students have also opted for postgraduate options. An analysis of the FT’s business school rankings, for example, shows how applications to postgraduate programmes, such as an MBA or masters in finance, have increased.

He also thinks that the forced shift in working habits could level the playing field and enable quicker progression — especially for those not based in London.

Nathaniel Fried, a geography graduate from King’s College London, was working part-time on setting up an information security company. Anticipating the lack of job opportunities, he decided to pursue it full time. “We have been doing well,” he says. While he feels he was forced by circumstances, exploring opportunities outside the traditional job market “has boosted my early career prospects by forcing me to innovate”, he says.

Similarly, PhD student Bevington — who drew on the lessons of finishing his undergraduate course during a recession in 2011 — also decided to start his own company, a non-profit in the area of space research. “When I approach would-be employers about my company’s offering, they can’t partner quick enough.”

Brian Massaro, an applied economics masters graduate from Marquette University in Milwaukee in the US, has accepted a full-time position following an internship during his studies, but he and a friend have been applying to start-up incubators and accelerators to grow an online publishing company he has been working on for the past few years.

While students felt the pandemic has had a knock-on effect on their immediate career prospects, many respondents’ sentiment was cautiously optimistic for the long term. But some felt that governments and companies should be providing more support and investing in graduates.

Morgan adds that businesses may need further incentives to provide high-quality graduate roles. “We heavily encourage young people to go to good universities, taking on a lot of debt to do so,” he says. “It seems, in my peer group, that there is a raft of graduates (from top universities) who are unable to find roles which challenge them. That is not to say they are entitled to one, but I think there is a clear gap between the promise of university and the reality on the other side.”

Fried adds: “I believe both businesses and government should be taking steps to invest in graduates. Social mobility is very low and those impacted most by lack of opportunities are marginalised groups.”

Rahul, an India-based MBA graduate who did not want to give his last name, says companies need to improve the recruitment process and pay graduates based on skills: “Do not reduce pay just because people are in need.” He also says that time taken to hire needs to be reduced to 30 days. “[Some] are taking almost 100 days for one recruitment process. It’s inefficient.”

Despite the challenges, some respondents are upbeat. “It is tough for us graduates,” adds a Brighton university graduate. “We’ll be all the stronger for it though!”

Explore the series
READ MOREGraduates: the class of 2021
‘I feel left behind’: graduates struggle to secure good jobs 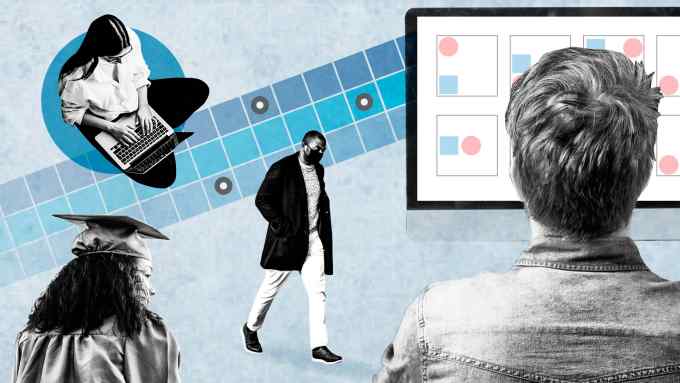