What’s the buzz about whisky in Wiltshire?

When the landscape designer Todd Longstaffe-Gowan was asked to create a garden and transform the wider parkland around Eastcourt in Wiltshire for its new owners Nicola and James Reed, he arrived to find a pony paddock with an old bath turned trough, right next to the house. “It’s really extraordinary to find a house of that time still with ponies living so close to the kitchen,” he says. “And it’s even rarer to find one with a kitchen garden adjacent to the house, because from the 18th-century these were almost all swept away and put at a great distance from the dwelling.” But the bones of the half-acre plot, which included beautiful Cotswold stone walls and highly manured soil enriched over centuries, were a gift – and a perfect blank canvas for the garden he has created.

Unlocking the potential of historic gardens and houses has been Longstaffe-Gowan’s life’s work. As gardens adviser to Historic Royal Palaces, he has worked on designs at Hampton Court Palace and recast 11 acres around Kensington Palace Gardens to mark the Queen’s Diamond Jubilee. But it was his own residence, Malplaquet House, a Georgian mansion in Stepney, that entranced Nicola when they were introduced by James’s parents 30 years ago. They began talking about Eastcourt later, “initially as friends”, and for almost two decades have worked together to reinvent the ancient estate.

Eastcourt was mentioned in the Domesday Book. The part of the house attached to the walled garden was built in the Tudor era, while the middle section of the property was added in 1765. When it came onto the market in 2003, the couple fell in love with the country pile – spotting a tiny ad in Country Life magazine – even though at that point the house had “gone to rack and ruin”.

Longstaffe-Gowan’s design – which included the complete overhaul of the walled garden – not only transformed the house and estate but ignited a new career for Nicola as a beekeeper. Just as the garden was beginning to take shape, James was given a hive for his 50th birthday. “He was horrified as he has horses and hated the idea of keeping bees, so I volunteered to go on a course.” It was the start of an obsession. “They are such extraordinary creatures to observe and watch. The hum of happy bees in spring is just enchanting and there’s so much to learn.” Nicola originally trained as a fine artist and often paints the flowers around her. “The bees bring the whole garden to life. Just watching them pollinate the garden is mesmerising,” she says.

Nicola initially gifted the produce from her bees to friends but on a whim tried an experiment – soaking the frames from her hives in whisky to extract every last drop of the honey. She began selling the resulting honey whisky at local farmers’ markets before her endeavour turned into a fully fledged business. Nicola now has 11 hives at Eastcourt; a further 119 in fields close to the estate are managed by a beekeeper who then sells the honey to Nicola’s company, Beeble. They use the idler-beekeeping technique, in which small amounts of honey are taken at points when there is a surplus. After being liquefied, the honey is then blended at the Strathearn Distillery in Perthshire. Nicola produces 50,000 bottles each year and has just begun making honey vodka and rum. The bees, in turn, have also helped transform the garden.

Longstaffe-Gowan began his work in areas close to the house where walks and vistas were paramount, creating an unconventional fruit and flower garden guided by sightlines where the family might want to sit or walk. Meandering paths circle curvaceous beds with a succession of perennials – agastache, catmint, penstemons, verbascums, salvias and asters as well as flowers for cutting, including lily of the valley, cornflowers, roses, peonies, delphiniums, dahlias and chrysanthemums. The other half of the garden is a more geometric layout of vegetable beds, herbs and fruit, and the warm walls are covered with espalier apples and pears.

A carved cupola from the Henry VII chapel in Westminster Abbey – which is thought to have been removed and replaced in the 19th century – was unearthed by Longstaffe-Gowan at a salvage merchant in Gloucestershire, and takes centre stage. “My eyes popped out of my head when I found the piece. It’s an extraordinary medieval carving – and the most spectacular eye-catcher in any garden I’ve ever done.” The cupola is decorated with climbing animals and, appropriately, honeycomb hexagons. Whimsical flourishes are key to Longstaffe-Gowan’s work – and are the subject of his latest book, English Garden Eccentrics, which was published by Yale University Press in April.

As the bee population has increased, the planting has responded, ensuring a long season of forage especially at the start of the year with swaths of snowdrops, early-flowering crocus and then spring bulbs. Existing areas such as the bluebell woods have flourished as areas have been carefully regenerated. Another larger walled garden, set further away from the house, has more than 50 varieties of apple trees providing yet more pollen and nectar. Nicola has added plants that the bees particularly like: especially lavender, heather and borage.

Despite the immense colony that Nicola has developed, wild and solitary bees happily coexist alongside the honey bees, and dummy hives are set up so that wild bees can create a home there too. This has been helped by a mass project which involved planting 50,000 indigenous trees. “We have a very beautiful ancient oak, which is our main view from the house and might be 1,000 years old, so Todd helped us to find trees that would support it rather than fight with it.” This includes disease-resistant elm plus various varieties of lime and wild cherry.

The planting in turn influences the flavour of each batch of Nicola’s whisky. “It’s like tasting wine; with the early harvest in July there is a distinctive appley, lemony taste. The later harvest tastes very different. So we explain our provenance and that every bottle might vary slightly,” she says. They also use a special filter system so that the pollen remains in the whisky.

Nicola is now an ambassador for Bees for Development and runs regular courses with bee whisperer Bill Anderson who uses a Warré system: hives that emulate the cavity of trees, although Nicola is mindful of too much human intervention. “The idea that bees need us is ridiculous. They can look after themselves very happily. You can keep bees but, rather like having a bird table, when you have a hive in your garden you should just allow them to be. It’s only when you want to take honey that you have to be involved,” she says, noting that she’s recently applied for planning permission to open up her own beekeeping school at Eastcourt.

“When we planted the first walled garden, who could have imagined that Nicola would become a beekeeper?” says Longstaffe-Gowan of their journey together. “As a designer, I always try to work with the local ecology and enhance it, but we’ve also created such richness here over the past 20 years, which has surpassed my imagination. It’s become a great big foraging pot.”

In an ironic plot twist, James has also fallen for the bees and now has two hives on the roof of his office in Covent Garden. “Last spring we had a taste-off. My six children came and we blind-tasted my spring honey against James’s Covent Garden variety. I was most upset that his honey won.” Perhaps a nip of honey whisky would have swayed the vote. 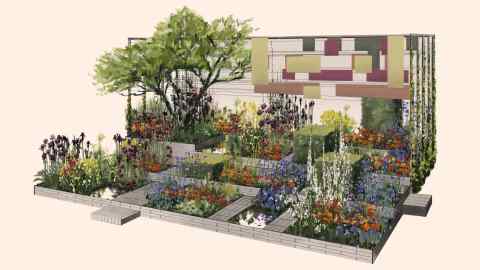