What does it really cost to make your clothes?

The hashtag #WhoMadeMyClothes? first appeared in 2014 as part of Fashion Revolution, the fashion activist platform created by Carry Somers and Orsola de Castro in response to the collapse of the Rana Plaza building in Dhaka, Bangladesh. The plaza, which housed five garment factories, crashed to the ground in less than 90 seconds, killing 1,134 people and injuring more than 2,000. Many of the victims were making clothes for UK, European and US fashion brands, as was revealed when those brands’ labels were found amid the ruins.

Fashion Revolution’s call for greater transparency within the global textiles industry, stronger legislation and better working conditions now has supporters in more than 90 countries. And its Fashion Transparency Index – an annual report that evaluates the performance of 250 of fashion’s biggest brands on ESG (environmental, social and governance) policy and implementation – continues to highlight the industry’s shortcomings. By 2019, for instance, only six brands (top performers include Adidas and Patagonia) scored more than 60 per cent on transparency when assessed on their social and environmental efforts.

Much of the platform’s success has been built on collaborations with designers, organisations and influencers, and most recently Somers has worked with the environmental filmmaker James Levelle. I find them at this year’s RHS Chelsea Flower Show, in Lottie Delamain’s Silver-Gilt Medal-winning Textile Garden, made in collaboration with Somers to showcase plants and flowers used solely to make or dye textiles, and designed to raise awareness about environmental choice.

Somers’ interest in water pollution and the effects of microplastics was spurred in 2020: “I went on an all-women research expedition to the Galápagos Islands to measure the levels of microfibre plastic pollution in the Pacific Ocean: 34.8 per cent of microplastics derive from the fashion industry, and brands were doing little to resolve the problem. It became really obvious while I was there that we can’t just clear pollution in the oceans – we have to do something back on land to prevent it reaching our waterways.”

Somers met Levelle at last year’s COP26 conference in Glasgow where he was presenting his film Race for Future, documenting his journey – fossil fuel-free – from his home in Hackney to Chile. As part of his social experiment, Levelle found himself on a tall ship travelling across the ocean. The two compared notes and bonded over their concerns around those issues associated with textile production, which both had witnessed firsthand.

We can’t just clear pollution in the oceans, we have to do something on land

Levelle describes his work as “adventures with purpose”. “There’s been no better educational experience than learning from indigenous peoples, whether that be in Latin America, Africa or Asia. I’ve been very fortunate to gain that understanding but I’ve then had to ask myself, ‘How do we bring that knowledge home?’”

Both he and Somers are preoccupied by water pollution, and how it has impacted the water supply not only around major modern textile hubs such as Bangladesh or Pakistan, but historic cities in the UK. Somers is currently conducting research with Keele and Loughborough universities into the waterways of the industrial towns of the Midlands and the North – once the powerhouses of UK textile production – in a citizen science project called Restorying Riverscapes.

Its area of focus is the River Churnet, which runs beside the old textile town of Leek in Staffordshire – once proclaimed the most polluted in Europe – where sample analysis of sediment and water will chart historical and environmental change. They hope to reconstruct the experience of workers during the town’s industrial heyday to show not only the changing pollution levels and ecological damage that befell the area but also how resilient they – and the landscape – can be. They will use the data and compare it with contemporary hives of output in Asia to show how positive changes can improve lives.

This has become a personal quest for Somers, who lives nearby. “It’s an important heritage town. William Morris spent two years in Leek experimenting with dyes and printing with local dyeworks owner Thomas Wardle. It was really interesting to read Morris’s opinion of the town because he saw it as epitomising the best and the worst of the textile industry – even referring to the factories as ‘temples of overcrowding’,” she says. “He referenced the damage to the landscape, from the poison to the air and pollution in the water. But he also saw how easily they could be overcome if things were done in a responsible way.”

As part of the project, the team have been conducting experiments around the impact of modern fabrics on the environment. To study microplastics, they laundered eight lab coats and found the garments released 5ml of synthetic and cotton microfibres in just one wash-and-dry cycle. “Imagine all of the laundry in your street, in your town – and the millions of microfibres produced every week,” says Somers. “Yet our Transparency Index reveals just 21 per cent of brands disclose any efforts to reduce microfibre pollution.” 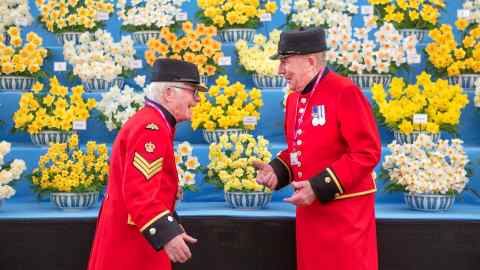 “We think the nightmare of fast-fashion production happens thousands of miles aways in India, China or Bangladesh,” adds Levelle. “It’s out of sight, out of mind. But by diving into the beautiful and chilly rivers and lakes of the Peak District and scientifically analysing the chemicals and pollutants in the ancient mud, we can tell the story of Britain’s nearly invisible industrial past. We’re unearthing both the local origins of modern textile production and its poisonous legacy hidden within our landscape.”

Somers hopes that raising awareness will bring about real change. “With Restorying Riverscapes and our Textile Garden, we want to sow that seed of curiosity,” she adds. “We want people to look at their labels, to choose their fabrics and fibres with care and to recognise their power as citizens to make a difference.” It’s a call to action to anyone who loves clothes – and the environment.

For more information and to find out how you can volunteer, visit fashionrevolution.org/restorying-riverscapes