LVMH and L’Oréal upbeat on recovery

The world’s biggest luxury group LVMH and the largest cosmetics maker L’Oréal have shaken off the sharp falls in first-quarter sales due to Covid-19, saying they will be able to withstand the knock to their businesses.

“The market should recover quickly as soon as measures to close sales outlets are lifted,” said L’Oréal on Thursday.

LVMH’s finance director said Covid-19 “would not have a lasting impact” on its activity and pointed to positive signs from China where the virus hit first but quarantines have now been lifted. Sales at Louis Vuitton, its biggest brand, have risen 50 per cent in the past two weeks compared with the same period last year.

Nevertheless the first-quarter contraction at LVMH was steep and far worse than at L’Oréal. The luxury group’s handbags and wallets start at around €1,000 and most of its stores are closed, whereas L’Oréal sells more mass-market products like Kiehl’s skincare and Lancôme cosmetics in drugstores and pharmacies that are still open.

LVMH quarterly revenue through the end of March fell 17 per cent on a comparable basis to €10.6bn, in line Morgan Stanley analysts’ estimates. Like-for-like sales at its largest division of fashion and leather goods held up the best — down 10 per cent — while its retail arm, which owns beauty outlet Sephora, fared the worst with a 26 per cent decline.

In contrast, first-quarter sales at L’Oréal stood at €7.2bn, declining 4.8 per cent on a comparable basis, with its division that sells products to hair salons faring worst. Skincare sales rose, largely sold through pharmacies, rose 13 per cent to €840m.

The fortunes of both groups are heavily reliant on consumers in China where the virus first hit business in February, and also on Chinese tourists who shop for luxury and beauty products when travelling abroad.

While demand is slowly recovering in China as quarantines are lifted, both the groups said, the travel bans in much of Europe and the US that remain in place will remain a drag for longer.

The Covid-19 crisis prompted LVMH to trim its 2019 dividend by one-third and cut executive pay. It is also seeking to renegotiate rents for its shuttered stores, and is cutting costs on staff, fashion shows, and travel.

LVMH is the first luxury group to report results since the pandemic began, and the pace and scope of the declines do not bode well for rivals such as Hermes and Gucci-owner Kering, and even worse for smaller players like Prada.

“We can only hope that the rebound happens gradually starting in May or June after a second quarter that will still be very affected by the crisis, in particular in Europe and the US,” the group said in a statement.

Mr Arnault and two of his children who work in the group, Antoine and Delphine, will not take any salary in March and April, and have renounced any variable pay for the year. Sidney Toledano, Nicolas Bazire and Antonio Belloni, three other high-level executives, have agreed to the same cuts to their pay.

LVMH
Inside the factory: how LVMH met France’s call for hand sanitiser in 72 hours 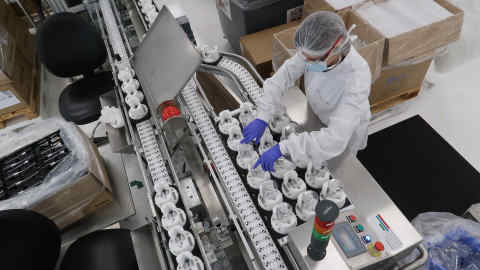 L’Oréal has not yet made a decision on the dividend and delayed its annual meeting to late June.

Both groups, however, have pledged not to put their employees in France on the country’s “partial activity” scheme, which allows companies to reduce workers’ hours or furlough them while the state covers most of the cost. LVMH and L’Oréal, as the first and second-most valuable companies by market value in France respectively, have said they were making the commitment out of national solidarity.

As previously reported by the Financial Times, LVMH had initially told French employees that it would use the scheme, but then changed course. It will now use it only at its press outlets, which include Les Échos and Le Parisien newspapers.