My personal style signifier probably has to be my Hush Puppies. I’ve been wearing the same pair of green shoes on and off since some time in the 1990s – they’re just so ridiculously comfortable.

The last thing I bought and loved was my Ricoh GR II, a simple, hand-held digital camera. Closer to film than digital, it’s a really fast street camera that I can keep in my pocket when I want to be spontaneous. I’ve been wanting to buy one for a few years.

And on my wishlist is getting around to fixing my Technics SL decks so I can start playing vinyl again. They’ve been sitting broken in my London living room for years. I first bought them back in the 1980s. Recently musician friends like SmallX, José James and Kamaal Williams have been giving me records, and it would be great to be able to listen to them again.

A recent “find” is the work of Yassine Alaoui Ismaili, who goes by the name Yoriyas. He’s a brilliant documentary-style street photographer from Casablanca who used to be a professional breakdancer. We met in Essaouira after being introduced by a friend and bonded over our shared love of capoeira, the Brazilian martial art. I ended up hosting a solo show of his work at Riad Yima, my home in Marrakech, which also acts as a gallery, boutique and tea room. 52 derb Aarjane Rahba lakdima Medina, Marrakech 40030; +212524-391 987

I have more than 3,000 pieces of Arabic memorabilia. My son calls me a hoarder

The best book I’ve read in the past year is Leo the African by the Lebanese-born French writer Amin Maalouf. It’s a fictional memoir of Hasan al-Wazzan, a young traveller in the 16th century whose journey takes him from Granada to Fez to Cairo to Rome. It reveals some uncomfortable historical truths – including the bloody Christian conquest of Moorish Spain. I love Maalouf’s writing – and, as a Moroccan, I feel a deep connection to Andalucía.

The podcast I’m listening to is Drink Champs. They interview hip hop artists and in the course of the discussion make their way through a table full of drinks. I grew up in that era so I love listening to the stories of acts like Busta Rhymes and De La Soul, and hearing what they’re doing now. drinkchamps.com

The best gift I’ve given recently was two of my portraits of the LA fashion designer Melody Ehsani to an artist-run auction to raise money for the construction of a school in Douar el Bared, Morocco.

And the best gift I’ve received recently is a pair of black Birkenstock sliders given to me by my right-hand woman and accomplice, Jenny Fremont. I’ve been shooting in Dubai so it’s all about staying cool and comfortable.

The last music I bought was Best Dressed Chicken in Town by Jamaican DJ Dr Alimantado. It’s a reggae album from the 1970s, and it reminds me of when I first arrived in England from Morocco in 1973 at the age of 12. Every Friday, I’d take my wage packet to the local record store in Kentish Town to buy 12-inch records.

I have a collection of Arabic memorabilia and paraphernalia including stamps, film posters, shop signs, clothes and food packaging. There are probably more than 3,000 pieces in total. My son Tariq calls me a hoarder. I draw on it constantly in the styling and the set dressing for my photographs. My first body of work in the 1990s, Graffix from the Souk, referenced the designs of Arabic goods – from tinned tomatoes to washing powder. I still repurpose packaging to frame my pictures.

The gadget I couldn’t do without is a Bic pen and any scrap of paper I can find. I write lists and notes and make sketches ahead of every shoot. That’s just how I work. Aside from my digital cameras and phone, I’m not a techie at all.

The place I can’t wait to go back to is Kasbah Bab Ourika, a small Berber-style retreat outside Marrakech in the Ourika valley. My friend Stephen Skinner built it from the ground up. It’s close to the Toubkal National Park, with incredible 360-degree views of the surrounding rivers, trees and Atlas mountains. It’s the only place that I really get to escape. I spend my time there just sleeping, eating, reading and taking walks – it’s perfect. kasbahbabourika.com

In my fridge you’ll always find all the ingredients for Moroccan breakfast pancakes called msemen, including organic zebda (butter), amlou (a type of almond butter) and goat’s cheese, as well as organic honey and argan oil. Everything comes from the local shops in the Medina. The stalls near there are also my source for fresh orange juice.

An indulgence I would never forgo is snacks. A normal day of shooting can be anything up to 18 hours. They’re long sessions, so I constantly graze on nuts and dates while I’m on set.

The last item of clothing I added to my wardrobe was a long-sleeved T-shirt from Arfoud Brothers & Sisters. It’s embellished with the Berber symbol of the palm tree. My studio director Jenny Fremont created the label with her husband, Abdelillah Ouahbi. He’s Sahraoui and comes from the small town of Erfoud in south Morocco, from which they draw much of their creative inspiration. The region has a unique mix of Arabic, Saharan and Berber cultures, but is often a forgotten place beyond its reputation as the city of dates. arfoudbrothersandsisters.co.uk

An object I would never part with is my negatives. All my earliest work from the 1980s and 1990s is shot on 35mm Fuji and Ilford film – and once it’s gone, it’s gone.

The one artist whose work I would collect if I could is Malian photographer Malick Sidibé. It’s an honour to have my name so often associated with his. I first discovered his work through Janet Jackson’s video for her 1997 track “Got ’Til It’s Gone”, which was shot in South Africa and highlighted his imagery. Our processes are similar – he was a local studio photographer capturing the spirit, style and energy of a very particular period in Mali, post-independence.

The grooming staple I’m never without is Palmer’s Cocoa Butter which I’ve used since the 1980s. I get really dry skin so I always have it with me. I love the vanilla smell and the texture, which is light without being oily.

My style icon is Moroccan stylist and photographer Chater Karim. On his Instagram, @style_beldi, he inhabits all these different characters, dressing up in vintage clothes, and shooting films in the karyane (shanty towns) of Casablanca. I love the way he highlights these everyday beldi (local) Moroccan styles and scenarios, and makes them feel cool.

If I weren’t doing what I do, I would be a gardener. In my late teens I worked as a groundsman on Hampstead Heath and Parliament Hill. We spent the day planting, cutting and tending to the land. For a few years, I also ran a stall on Camden Market at the weekends selling plants and flowers I’d bought earlier in the day at Covent Garden. I definitely have a green thumb, and I’d enjoy the chance to be out in nature every day.

My wellbeing gurus are the guys at Place des Epices, the traditional hammam and spa on my street in Marrakech. They scrub you, stretch you out and make you feel new again. When I’m in London, I’ll get a massage at the spa at Mondrian in Shoreditch. spadesepices.com; sbe.com/hotels/mondrian/shoreditch

The Aesthete
Anna de Pahlen: ‘It was always my goal to move surrounded by art’ 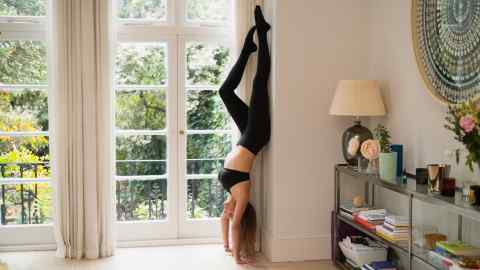 The work of art that changed everything for me was a portrait by my Grenadian friend, Dave Joseph, of his brother with his mates, all dressed in Fiorucci, taken on South Molton Street in London. Growing up in the 1970s, he was a tough street kid who happened to take these beautiful pictures. He’d have them printed, framed and on display. Art wasn’t otherwise a part of our lives; we were as far away from that creative world as you could be. He was the first person to show me how cool making pictures could be.

The best souvenir I’ve brought home is Perception Blue, a painting by the Tunisian-French artist eL Seed, which I brought back from my recent trip to Dubai. He plays with the forms of Arabic calligraphy to create beautiful artworks with a unifying message – I can’t wait to find a place for it in my home.

I’ve recently rediscovered Qatar. I’m just back after a trip there for the first time in seven years. It has grown and changed so much. They have the incredible new National Museum of Qatar in Doha designed by architect Jean Nouvel, and a whole design district. It’s wonderful to see how it’s evolved. I was there working with the Fashion Trust Arabia, which celebrates and supports designers from the Middle East and north Africa, photographing the winners of their annual prize.

My favourite room in my house is my bedroom in my old riad, which is my private sanctuary. It’s filled with all the stuff that makes me happy – lots of books and posters but also backdrops, props and outfits from past shoots. It looks out onto a small terrace filled with begonias. At night it’s perfectly silent. It represents comfort for me.

When I need to feel inspired I go to the market. If I’m in Marrakech, I’ll go to the souk and look for props. The first thing I do any time I travel to a new city for work is go to the local market – I’ll look at the fabrics, the rugs, buy some food and see what’s around. I’ll gather things along the way – anything from sunglasses to African flags – until I find the right moment to use them for a portrait. The flags I bought years ago eventually became a suit for a recent picture of the grime MC Afrikan Boy.