Lawyers from rival groups learn how to collaborate

From ventilators to mobile networks, having a common purpose helps achieve urgent tasks

As it became increasingly clear that ventilators would be crucial to fight the spread of Covid-19, British engineering multinational Smiths Group decided to step up.

The UK’s public health service, the NHS, had access to around 8,000 ventilators in March when coronavirus cases surged, but modelling predicted that a further 22,000 would be needed. Smiths’ medical technology division was the only UK-based maker of transportable ventilators, but at a rate that would have taken years to meet demand.

Enter companies such as Rolls-Royce, GKN Aerospace, Airbus and many others across the UK, which offered to hand over some of their manufacturing facilities, components and logistics to meet the challenge. The VentilatorChallengeUK consortium was born. Yet without the work of their in-house legal teams, the collaboration’s good intentions could have turned out quite differently.

“The aim was to ensure production could begin without delay, and that the consortium was quickly brought together . . . to ensure that all interests were represented in negotiations with the UK government,” says James Down, corporate general counsel at Smiths.

They were driven by a sense of common purpose that felt unique, he says. At the same time, “we had to ensure the consortium was legally robust in terms of meeting overall legal standards and that all future liabilities, including appropriate risk-sharing, had been considered for all the businesses involved”.

The last time Smiths, Rolls-Royce and GKN had pulled together for a common cause was as part of a second world war partnership working flat out on making Spitfires, says Mr Down. “I like to think that we showed some of that grit and determination in our work for this project.”

Even with such a worthy goal, the legal challenges involved in disparate engineering companies working at great pace were many.

GKN Aerospace and Rolls-Royce sites had to be approved by the regulator to make ventilators. Risk had to be shared by consortium members, since most of the parties were acting outside their usual areas of expertise in a highly regulated environment. Antitrust considerations had to be in place to protect trade secrets. Non-disclosure agreements, supply agreements, government contracts, quality assurances and training schedules all had to be managed in a way that did not slow the supply of the ventilators — all while operating in the middle of a nationwide lockdown.

“Everyone needed to ensure their organisation was protected from a risk perspective, [but] it never felt like we were negotiating against each other,” says Mr Down.

You know that whatever you negotiate today, the shoe will be on the other foot tomorrow

While the urgent task of tackling Covid-19 created the most pressing need for rivals to work together, other collaborations have been exploring how to join forces.

The UK’s mobile network operators are known for their arch-rivalry. So the Shared Rural Network, a collaboration between Vodafone, O2, EE and Three, marks a breakthrough — albeit after the government threatened to impose a solution. It will extend mobile phone reception into hard-to-reach and sparsely-populated areas.

Coverage in rural locations has always been a challenge for network providers. With too few customers to make rolling out infrastructure viable, they are often also hilly, which makes line-of-sight towers difficult to place — think of the Brecon Beacons in South Wales or the Highlands in Scotland. When networks are rolled out in underpopulated areas, “you effectively create a local monopoly,” says Helen Lamprell, Vodafone general counsel. “This project provides four competitors in those highly rural locations.”

In many countries governments have used mobile network deployment to raise money. In the early 2000s, when 3G was rolled out in the UK, the regulator Ofcom auctioned off frequencies to the highest bidder, raising £22.5bn. Although the windfall was lauded, some argue that such a strategy leads to poorer coverage because carriers are left with less capital to spend on the infrastructure. 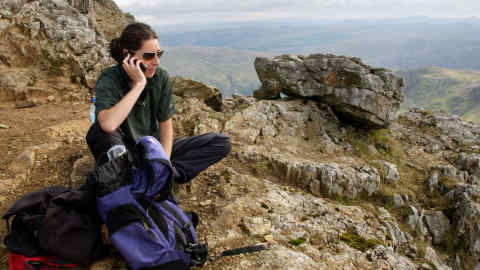 Some 20 years later, it is clear why the UK government might want to extend coverage. Consumers and businesses are clamouring for remedies to patchy or non-existent coverage, internet access has been declared a human right by the United Nations — and 5G networks could potentially connect remote areas to digital services including healthcare.

The Shared Rural Network involves sharing masts already in operation, and building new infrastructure in “not spots”, where there is no coverage. The new masts can be shared by all four providers.

Conversations were pragmatic, Ms Lamprell says: “If any of the other carriers had issues with certain aspects of the deal, we had to genuinely try to understand their point of view because if it was something they cared about, it would probably affect all of us in some way.”

Unlike telecoms companies, it is not uncommon for automotive industry competitors to engage the services of erstwhile foes. But a new collaboration in the sector, launched in 2019 and since expanded, is a first of its kind — and possibly the biggest industrial alliance in the world. Two of the world’s biggest automotive makers, Germany’s Volkswagen and its US rival Ford, have agreed to help each other make and sell commercial and electric vehicles. The deal will significantly increase the supply of electric cars.

“You know that whatever you negotiate today, the shoe will be on the other foot tomorrow — and that reality forces parties to be very transparent and aware of the balance between the two companies,” says Maler James, a lawyer at Volkswagen who handles regulatory, M&A and foreign holdings.

“You need to think long term. Reciprocity is everything.”