Described as The Joy of Cooking meets the Bible, the Ghetto Gastro’s Black Power Kitchen is like nothing you’ve ever read before

It’s been 10 years since the Bronx-based culinary collective Ghetto Gastro was formed. And it’s a marker of how ambitious it was from the start that “we’re still at the early stages of accomplishing what we set out to,” says co-founder Jon Gray, 36. “A global movement” is part of the plan. Aside from Gray, a former Fashion Institute of Technology student who used to co-run a small denim company, the team currently comprises chefs Lester Walker, 41, who previously worked at New York restaurants Jean-Georges, Buddakan and Eleven Madison Park, and Pierre Serrao, 34, who trained in Italy.

The GG squad (as they call themselves) has already achieved a lot. They’ve thrown dinners for 1017 ALYX 9SM and Rick Owens; organised events for Cartier, Sotheby’s and Off-White; and developed merchandise including “Food is a Weapon” T-shirts, pantry items like waffle and pancake mix and kitchen appliances (on sale at Target and Williams-Sonoma). In the pandemic they teamed up with non-profit Rethink Food to distribute meals to Bronx residents.

Occupying the spot where culinary art meets community activism, their core approach is about “using food as a medium to tell stories”, says Gray. Like the story of US race relations told through their deconstructed “Amerikkkan apple pie”, which was first served at an event in 2016 on plates with a chalk outline (or was it icing sugar?) of a dead body. “The only thing as American as apple pie is the oppression and brutalisation of black people,” says Gray. “It was really just to spark conversation. The baseline is always deliciousness. Because if [a dish] doesn’t taste good who cares?”

That pie – a layering of pickled and poached apples with apple compôte and ginger crumble – is one of the recipes in their debut cookbook Black Power Kitchen. Though “cookbook” hardly does it justice. “Manifesto” is the term Walker uses, while the foreword frames it as “a love song to the Bronx, but also a treatise and a travelogue, a history of Black people and food, and a challenge that is both culinary and cultural”. Says Gray: “We wanted to break the norm in printing.”

It’s a treatise and a travelogue, a challenge both culinary and cultural

Alongside recipes there are artworks by Amy Sherald, Kerry James Marshall and Lynette Yiadom-Boakye, among others; conversations with the likes of rapper A$AP Ferg, Thelma Golden of Harlem’s The Studio Museum and Nigerian chef Michael Elégbèdé; plus a foreword by acclaimed High on the Hog author/academic Jessica B Harris.

The book is teeming with stories; many about the Bronx, where Gray and Walker grew up, and its diverse food culture. We get their take on the classic bodega sandwich; a veggie version of General Tso’s chicken from their favourite Chinese takeaway; and a recipe for fritto misto, which comes heaped onto plates at the kiosks on City Island (aka “Hood Hamptons”). They also share their “Twerk n Jerk” spin on jerk chicken. Because how could they not? “We grew up eating jerk chicken,” says Walker. “You go to certain parts of the Bronx, smell the spices, hear the conversations, the music. It’s a dish about joy, festivity, having a good time.”

The book also pays tribute to their mothers, celebrates Black pop culture (with dishes like King Jaffe Jollof inspired by Eddie Murphy’s Coming to America) and makes the case for healthy eating as a vehicle for social empowerment, including among inmates: “This collard green salad [is] a rejection of the nutrient-deficient foods that end up on the prison plate,” posits the entry for State Greens, whose dressing combines Bragg Liquid Aminos, toasted sesame oil, manuka honey, shallots, garlic, ginger and spring onion.

Many of the recipes are plant based. As Serrao points out, black people throughout the African diaspora have long maintained plant-based diets. And while so many African-American communities continue to be deprived of healthy options (through “food apartheid” in only having access to bodegas and corner stores), the focus on plant-based eating, says Walker, is about prioritising “black futures [over] black history”. 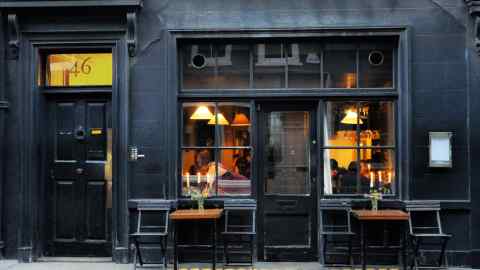 Typically, the team has high hopes. “I see this as The Joy of Cooking meets the Bible,” says Gray. “AKA basic instructions before leaving earth.” Or to put it another way: “The market rate for a GG dinner is a quarter of a million dollars. This is $10mn worth of recipes.” With talk of their own imprint, TV and other media, this oven, as Gray puts it, is just warming up.