Most chief executives spend their days worrying about how to defend their businesses against the violent pace of technological change. For Jean-Christophe Babin, a Frenchman running Rome’s luxury house Bulgari, the opposite is true. The faster the world changes, he argues, the greater the value of brands such as his, which have stuck with traditional manufacturing techniques that are often unchanged over hundreds of years.

“A worker coming from the Bronze Age could, after two weeks in the Bulgari workshop, be a perfect jeweller. Likewise, if you brought a watchmaker from 200 years ago to our workshop,” he says, “in two weeks he or she would be fully operational. You obviously cannot say that about almost any other activity on the planet.”

Mr Babin, who became chief executive of the LVMH-owned Bulgari in 2013, is steeped in the luxury watch industry, having worked for almost 13 years in Switzerland as chief executive of TAG Heuer. This followed several senior roles in multinational consumer goods companies and a brief spell as a management consultant.

Since taking over at Bulgari, Mr Babin has maintained the company’s focus on classic and Roman-inspired jewellery designs while introducing new watch ranges and building out the company’s portfolio of branded hotels around the world.

“The Italian dimension is very important to clients,” he says, speaking at Bulgari’s central Rome offices overlooking the Tiber river. “Bulgari is the essence of Rome, but is also a brand where almost all our products are manufactured in Italy, from the most expensive piece of jewellery to this bottle of perfume. It is not only the very premium that we [produce] locally.”

Aside from a modest watch, the only jewellery that Mr Babin is wearing is one of Bulgari’s B.Zero1 rings, a wide, cylindrical shape modelled after Rome’s Colosseum, which he says is emblematic of the brand’s attempt to fuse the city’s heritage into its designs.

By remaining focused on handmade, traditionally manufactured products in a small number of specialised workshops, Mr Babin believes that Bulgari is not only resilient to technological change, but that its brand becomes more desirable to clients who yearn for tradition and continuity.

“We are in a world where everything is moving very fast, and this is related to technology and acceleration of [it]. This has a lot of functional benefits for human kind but it also is creating a lot of anxiety,” he says. “Technology creates a sort of psychological instability, which you can deal with through the family and the home but also [with] things like jewellery. When machines are taking over everything, including with things like artificial intelligence, the paradox is that this acceleration of technology somehow adds to the value of those tangibles.”

Founded in 1884 by a Roman silversmith of Greek descent, Bulgari has long been known for its jewellery, worn by stars such as Elizabeth Taylor (pictured above), as well as leather goods and perfumes. The company has over the past three decades steadily increased its status as a high-end watchmaker, too. It launched its first designs for daily wearing in 1975, having previously focused on ultra-luxury jewellery watches.

For all Bulgari’s product lines, Mr Babin says, controlling supply is critical to maintaining the quality and desirability of the brand. At the same time he must balance this with allowing for enough growth to account for the increasing number of customers, especially in emerging markets, who want to buy its products.

When machines are taking over, the paradox is that this acceleration of technology adds to the value of tangibles

“We want to have some volume development, as we acknowledge each year we have more clients around the world who will want to buy luxury items,” he says. “There are collections we purposely limit. We sit down with sales and decide to cap at a certain volumes. It is a bit subjective, there is no magic number, but even at price points that are accessible, we are controlling supply closely.”

It also allows for a tight control over all aspects of the quality of the supply chain, something Mr Babin argues is crucial when selling expensive items to customers. “Ethically speaking, when you sell a €10,000 pendant or ring it has to be long-lasting,” he says.

His approach appears to be paying off. LVMH said in its first-half results for 2018 that Bulgari’s continued gain in market share in China and the US had helped profit from recurring operations in the group’s watches and jewellery division grow by 46 per cent year-on-year to €342m.

Watches are the area of his business that is most vulnerable to technological change. The rise of smartwatches such those made by Apple have offered consumers a new option that has presented a possible threat to the popularity of the high-end, Swiss-made watches that Mr Babin has steeped himself in.

Mr Babin again sees innovation elsewhere as something that strengthens the status and desirability of traditionally made Swiss watches. 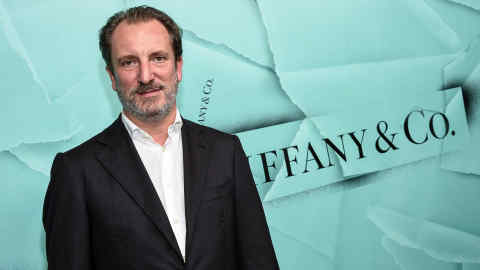 “What happened with the digital watches is that they basically attracted people to what I would call wrist-wearing, creating many more millions of clients and probably younger ones,” he says. “Typically 20 years ago you would first get a luxury watch when you were in your twenties, often when you got your first job out of university, as there was often a sort of graduation gifting in many countries [such as the US].”

Instead of creating competition for luxury watch brands, Mr Babin argues that smartwatches will mean people start wearing a watch earlier in life and will eventually graduate to higher-end pieces. “Sooner or later you will probably be interested in having something more durable and long lasting, that won’t become obsolete like smartwatches do.”

He remains convinced that as long as Bulgari sticks to the methods it has employed for 135 years, it will remain in fashion. Mr Babin adds: “Thousands of years ago [courtship] was celebrated with jewellery. Today, [finding a partner] remains one of the reasons why people buy jewellery.”