House of the spirits: the magical afterlife of No 43

The flamenco dancer and artist Ron Hitchin lived in the same house in Hackney for nearly 70 years. It has now become the launchpad for a new interiors brand, Atelier LK

When Lisa Jones was invited to view a property for sale on her leafy east London street last autumn, little could have prepared her for what lay behind its pale-pink façade. Known as No 43, the former Hackney home of Ron Hitchins – the abstract sculptor, ceramicist, barrow-boy, one-time tailor and accomplished flamenco dancer – is a testament to a rich and colourful life that reveals itself room by glorious room. Over the course of close to 70 years, until his death aged 93 in 2019, Hitchins transformed the semi-detached Victorian villa into a living work of art.

From the outside, the commanding cast fibreglass relief front door and accompanying house-number plate are the only indicators of the treasures inside. Once inside, what’s revealed – from the mirrored dance studio on the first floor, to the wood-panelled kitchen and the sculpture-filled garden – is an artist’s home assembled with the same care, attention and creative vision as domestic interiors such as Charleston or Cambridge’s Kettle’s Yard.

“It was such a beautiful, unexpected discovery,” says Jones of the art and decoration she found at the property she’d passed countless times in the years beforehand. “We were blown away by the energy of the house and Ron’s incredible collector’s eye.” Jones, who is one half of the transatlantic design studio Atelier LK with Ruby Kean, had an offer accepted on the house that same day, before it ever officially reached the open market – and the duo have been on a rollercoaster journey of aesthetic discovery ever since.

Born in Poplar in the 1920s to a Chinese father and Lithuanian mother, Hitchins became known as “The Flash”, igniting the dance floors of London with his jive, rumba, rock ’n’ roll and mambo moves – captured on film by Ken Russell in 1960 – and turning his Hackney home into the unofficial headquarters of the vibrant international flamenco dance scene.

While making money on the weekend market stalls of Petticoat Lane and Ridley Road, selling button-down shirts and flares of his own design, Hitchins spent his weeks dancing, teaching flamenco and fashioning his signature artworks. “Ron was a bon vivant who really knew how to live,” says Jones. “His hosting skills and parties were absolutely legendary.” Before the completion of the house sale, Hitchins’ close friend and sole executor, the flamenco guitarist Mike Jingle, established an open house, inviting artists and art dealers from the local community and beyond to experience the space first hand. Among the most remarkable works on display was the Brutalist four-poster bed that Hitchins originally created for an exhibition at Temple Lodge in the 1970s. Embellished with 3,582 biscuit-fired ceramic tiles, each hand-inscribed by Hitchins with Aztec-inspired, abstract designs – a cache of some 2,000 similar terracotta tiles was also unearthed from the loft – it’s a truly monumental creation. According to Jingle, Hitchins refused an offer from Harrods to purchase the bed in the 1980s (and at the time of printing it is still available to buy). When curators from the Victoria & Albert Museum visited, they selected, along with five other pieces, a miniature replica of the bed made for cats that will go into the collection of V&A East, which opens in Stratford in 2024.

An outsider artist in the truest sense, Hitchins never received this kind of recognition during his lifetime. Not that it bothered him. “Ron contributed to a lot of exhibitions, but he was never truly accepted by the art establishment,” says Jingle. “He sold pieces here and there to people he liked, but gave much of his work away.” When Hitchins died, Jingle’s sole instruction was to distribute more than 90 personalised flamenco boxes – miniature wooden cabinets that pay tribute to the artistry of individual dancers – to their designated beneficiaries in the flamenco dance community.

So inspired were Jones and Kean by Hitchins’ open-hearted creative ethos, they felt compelled to honour his firebrand spirit by inviting artists and designers to respond to the interior at No 43. Hosted in the house this autumn, the month-long exhibition transformed the space into an immersive design experience showcasing modernist 20th-century pieces by designers including Charlotte Perriand, Audoux and Minet and Axel Einar Hjorth, alongside ceramics, canvases, furniture and decorative objects from contemporary creatives, all seen together with Hitchins’ own art. The reaction was remarkable. “We really wanted to celebrate the legacy of Ron,” says Kean. “Everyone has been so inspired by the way that he lived, and there’s been so much excitement around the different layers of the story – the life, the art, the home.”

Many of the contributing designers come from the thriving Hackney community of creatives, some of whom remember Hitchins first-hand. EJR Barnes has created a mighty marble-topped table with column-like stainless-steel legs for the dining room; Fred Rigby made the majestic Golden Ratio Desk in ebonised oak and steel, which sits on the first floor; Abid Javed forged his sublime molecular-inspired ceramic forms; while Christabel MacGreevy’s joyful jesmonite sculptures lend a pop sensibility to the back garden. The work of these Hackney locals was paired with a roster of international talents including designer Minjae Kim, who is based in New York, and Rooms Studio in Tbilisi, Georgia. Everything on show is for sale.

This exhibition has also served as a compelling showcase for the Atelier LK design studio, which Kean and Jones established last year. They already have an impressive roster of residential interior projects in the works, including an apartment in Dalston, a home in Palm Beach, Florida and a farmstead in Mill Brook, New York. Though they first met at a lunch at Il Buco in Manhattan back in 2018, it was during lockdown that their friendship – based on a mutual love of interiors – evolved into a working relationship.

“Lisa has such amazing taste,” says London-born Kean, who studied photography and art history before joining Firmdale Hotels, where she worked as the head of design in New York. “I would get her advice on design pieces I’d found and she would ask me to look at the interior projects she was pitching for. Neither of us actually intended to get a design partner, it just sort of happened.”

Much like her mother, a Trinidadian nurse turned art gallerist, Jones’s route into interiors was somewhat less direct. After studying economics, she worked as a fashion buyer for Browns Fashion in London and then Opening Ceremony in New York. It was while renovating her first home on Shelter Island that her focus began to shift. She began obsessively sourcing pieces from across the US, igniting a fascination with 20th-century Scandinavian design that rapidly spiralled. “It got so out of hand that I had to start selling,” says Jones, who established @a_good_chair, sourcing and selling furniture and design objects first to friends and then decorators and collectors.

It’s this blend of design and curation, mixed with Kean’s instinct for layered, theatrical interiors – she’s dubbed queen of the install – that makes their union as Atelier LK so interesting. “The common thread between our styles is a certain simplicity of form, and a richness of texture,” says Kean of the studio’s evolving look.

The next, most closely watched phase of their project will be the transformation of No 43 into Jones’s family home. “Ron is a huge inspiration for every single detail of the project,” says Jones. “We want to be as sensitive to the way he lived as we can but we also need to live in it; it’s not a museum.”

The palette will be pulled from the green, russet and gold patina of Hitchins’ fibreglass panels and wall reliefs, and the dance studio will become a child’s bedroom, with its 1930s Crittall windows and mirrored wall left firmly intact. Elsewhere, Hitchins’ sculptural ode to Hepworth – which he dubbed “Barbara” – will be remounted, overlooking a garden room accessed by a pair of his fibreglass panel doors. One will lead to Atelier LK’s studio, the other to a sauna. It’s the kind of reassuringly quirky touch that suggests Hitchins’ hand will be felt at No 43 for many more years to come.

READ MOREThe HTSI editor picks her favourite reads of 2021
House of the spirits: the magical afterlife of No 43 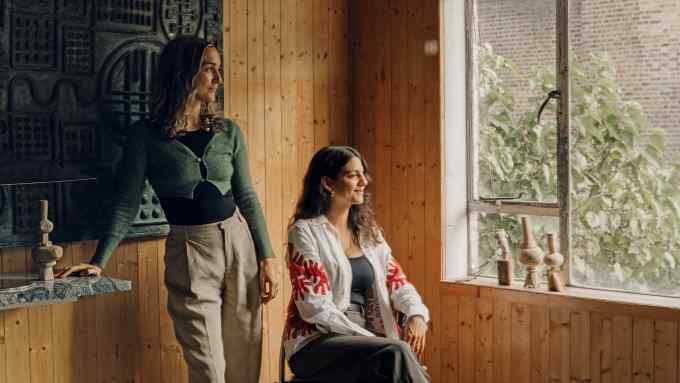