Once huge and cumbersome, the new slimline touring bikes are ready for anything

I truly came to appreciate the adage that “less is more” on 23 June last year when I had taken the earliest possible opportunity to load up my old BMW R1150GS and head off to the south of France.

After a pre-dawn departure from Devon and a smooth 300-mile ride to Dover, I was already basking in the special sense of exhilaration peculiar to long-distance motorcycle travel. There wasn’t any of the usual queuing and it was a glorious summer’s day. Could it get any better, I wondered? And then I pressed the bike’s starter button to board the ferry – and precisely nothing happened.

With a full tank and loaded with luggage, the BMW R1150GS weighs nearly a quarter of a tonne. From past experience, I knew the only way to bump-start this monster was to climb aboard and count on the good nature of at least three physically fit passers-by. The appeal of the smaller adventure bike was all too clear.

Huge adventure motorcycles took off as a result of the global tours completed by Ewan McGregor and Charley Boorman in 2004 and 2007. Their exploits aboard a brace of R1150GSs led to a surge in sales of the model and a race by rival manufacturers to develop comparable machines that could tackle unmettled roads, ford rivers and climb mountains, while making work of motorways.

They remain the default choice of the world’s “overlanders” and, rather like a modern-day Range Rover, feel as though they will go anywhere – until they won’t. Getting one stuck at the bottom of a rocky valley or up a muddy pass can really spoil things, because they are just too big and cumbersome to be manhandled out of trouble.

Hence the new trend for smaller, lighter machines. Less of a handful to ride both on- and off-road, they also make more nifty commuters but will still go the distance – albeit at a more leisurely pace – and can carry all the gear anyone’s likely to need.

Surprisingly, the trend wasn’t led by one of the big four Japanese manufacturers but by India’s Royal Enfield, which was first to exploit the opportunity for smaller adventure bikes in 2016 with the launch of its Himalayan, a single-cylinder, 410cc machine, the idea for which came from brand CEO Siddhartha Lal, himself a keen adventure rider.

Powered by an all-new, in-house engine, the Himalayan prompted considerable excitement when it first appeared in 2016 – although the poor build quality of early models soon dampened enthusiasm. That problem has now been addressed. The 2021 Himalayan is lithe and nimble, can be accessorised with awealth of luggage and equipment and, save for being able to cruise at illegal speeds, it does most things an adventure bike of three times the engine capacity can do.

A fully kitted Himalayan costs less than £5,000 and having lived with one for a fortnight, I’ve made up my mind that it’s the bike I’ll be riding if I can head off to Greece later in the year. It proved excellent for everything from quick shopping trips (the optional aluminium panniers are capacious) to discovering local tracks and off-road trails that I had never previously considered exploring on my 1150cc behemoth for fear of dropping it or getting it immovably stuck.

For BMW loyalists, there’s also the nifty G310GS (which is also built in India) that starts at just £5,435. It’s rather more sophisticated than the Enfield, boasting features such as electronic throttle control, a full LCD dashboard and a 12-volt power socket, and numerous aftermarket firms also offer racks and pannier systems to enhance the bike’s suitability for long-distance overland trips.

Austrian manufacturer KTM – famous for its success in off-road racing and the winner of 18 consecutive Dakar Rallies – entered the fray in 2020 with its 390 Adventure (from £5,649). With a 250-mile fuel range and an impressive catalogue of accessories to choose from, it offers a serious alternative to the maker’s successful, big-engined adventure bikes.

The Japanese, meanwhile, are putting up some stiff competition. Yamaha was at the vanguard of the overland motorcycling scene way back in the early 1980s when it launched its original Ténéré model, a basic trail bike with a big fuel tank and a 600cc engine that, for years, was the default choice among those who wanted to take to two wheels to escape the rat race.

The latest model to carry the illustrious Ténéré name is the desert rally-inspired XTZ700 (from £9,499) that can be specified with an Explorer Pack of bolt-on bits including aluminium luggage, crash bars, fog lamps and rock protection. And for those who want to try a Ténéré before committing to buy, Yamaha runs an off-road experience centre in North Wales (yamaha-offroad-experience.co.uk).

HTSI
Roll back the gears: Japanese classic motorcycles zoom back into focus 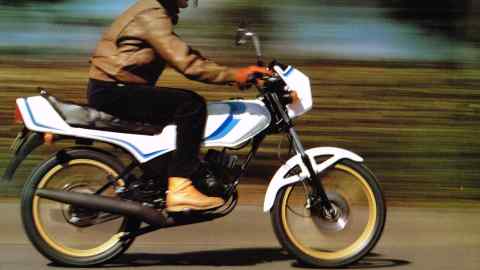 Suzuki’s contender is the V-Strom 650 (from £7,999 and £1,590 for a luggage kit), while Kawasaki weighs in with its £7,549 Versys 650 and Honda offers a choice of lightweight and middleweight adventure models with its all-new CRF300 Rally and the more road-orientated CB500X.

They’re all fit for purpose – all we need now is to be able to go somewhere...