Follow how business and the economy are recovering post-pandemic with our Road to Recovery bulletin. Delivered 3 times a week.

More than a quarter of companies forced to take on extra debt to survive the pandemic have warned they may need to cut back their operations, highlighting a mounting crisis that economists warn could hold back business recovery in the UK.

More than 40 per cent of companies took on debt during the crisis, according to a survey conducted by the British Chambers of Commerce and banking group TSB. While one in four warned over their future growth plans, about a tenth said they may cease trading altogether.

Many of the companies that borrowed took government-guaranteed loans from banks using the Coronavirus Business Interruption Loan Scheme (CBILS) or the Bounce Back Loan Scheme (BBLS). The programmes often offer lower interest rates and less stringent conditions than private lenders to enable struggling businesses to secure crucial finance. In total, state-backed loan schemes have lent more than £52bn to 1.2m businesses during the pandemic.

However, senior banking executives and policymakers are increasingly concerned over the huge debts being taken on by weakened businesses, with fears over so-called “zombie companies” that are strong enough to survive but unable to invest for growth because of the need to cover their debts.

Two-thirds of the companies surveyed said repaying debts built up during the pandemic might have a negative impact on their business. A fifth said they would change their investment plans because of their debt.

More than four in 10 of the companies surveyed said they have not yet accessed additional finance, but faced challenging business conditions.

The BCC and TSB poll, which surveyed more than 500 companies, also showed that many businesses will require flexible repayment solutions to rebuild revenues and avoid an unsustainable debt crisis.

The government-backed schemes come to an end this autumn, with CBILS closing for new applications this month and bounce-back loans ending in October. Business groups such as the CBI have called on the government to extend the programmes.

Businesses that had taken government-backed loans are evenly spread across all sectors, according to the survey, with manufacturers slightly more likely to have needed extra debt.

More than two-thirds of companies that took on extra debt said they used it to support cash flow, reflecting the challenges in keeping businesses afloat as they closed their doors and demand fell away sharply during the pandemic.

More than 40 per cent of those who took loans said they used the money for overheads or for paying staff, while a third used it to pay other debts. The smallest companies were more likely to say that repaying debt could cause them to cease trading. 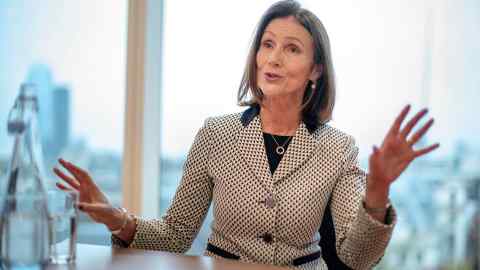 “With many businesses still facing reduced demand, depleted cash reserves, and continued uncertainty, bold solutions will be needed to prevent thousands of firms across the UK from falling into a spiral of unsustainable debt,” said Adam Marshall, BCC director-general. “If not addressed, large debt burdens could stifle the recovery, threatening jobs and constraining business activity and investment.”

City groups have urged the government to support businesses struggling under unsustainable debts. Suggestions include swapping the money owed into equity stakes or by paying it back gradually through a state-backed group.

A fifth of companies surveyed said they would prefer a “student loan” style scheme where the debt becomes a contingent tax liability repaid on a means-tested basis. This was a key part of proposals submitted to the government by TheCityUK, the lobby group, over the summer. Just 4 per cent of businesses said they would prefer to convert the debt into an equity stake in their business held by others.