Sign up to myFT Daily Digest to be the first to know about Fund management news.

Vanguard has halted plans to obtain a fund management licence in China just months after moving its main Asia office to Shanghai, as the US group’s low-cost model hit speed bumps in a fast-growing market.

The world’s second-largest asset manager said on Tuesday it was “pausing” its application for a licence. Vanguard added that it would instead focus on its investment advisory partnership with Ant Group, the Chinese payments business controlled by billionaire Jack Ma.

The move comes after a rush of interest in China’s fast-growing mutual fund industry from some of the world’s biggest investors. Vanguard competitors, including BlackRock and JPMorgan Asset Management, have expanded their presence in the country in recent months.

“We greatly appreciated the opportunity to tender an application for an FMC licence and are glad to see China welcoming international global asset managers to participate directly in the retail funds market servicing Chinese investors,” Vanguard said in a statement.

The company said that it would “focus on continuing to grow the advisory business” and that it remained “committed to China . . . in the long-term”.

LexFund management
Vanguard: opting not to go it alone in China Premium 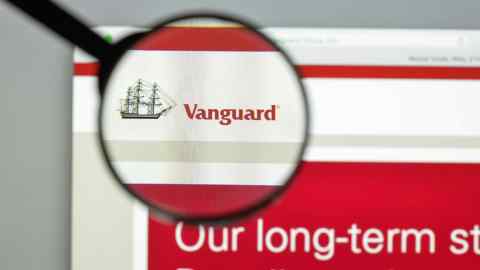 In August last year, Vanguard announced it was relocating its main presence in Asia from Hong Kong to Shanghai, saying at the time that its “future focus in Asia is on mainland China”.

But the latest development, which was first reported by the Wall Street Journal, highlights the challenges the company faces in the Chinese market.

Vanguard, which managed about $7.2tn globally as of January, is best known for its low-cost and passive investment products. A person familiar with the Chinese fund industry suggested its practice of not paying third-parties commissions for reselling its funds was causing distribution issues.

“There’s a realisation and a recognition here that they would have difficulty selling their own fund products in China, and as a consequence of that, why would they want to go and spend whatever it costs . . . in setting up a full fund management company licence,” the person said.

Ignites Asia, a sister publication of the Financial Times, reported that Vanguard would lay off half of its staff in Shanghai.

Vanguard’s partnership with Ant, which was announced in late 2019, offers customised investment advice to hundreds of millions of users of the Chinese fintech platform’s Alipay app. The partnership acquired 200,000 clients in the first few months of its operations last year.

The US group pointed to “enormous demand among individual Chinese investors for investment advisory services” as part of its shift towards the Ant joint venture.

Ant’s proposed $38bn initial public offering, which was expected to be the largest ever, was cancelled by Chinese authorities in November as Beijing clamped down on the country’s booming online financial industry.

Increased Wall Street interest in the world’s second-biggest economy has come as China eases the rules which govern foreign access to its vast domestic markets.