If you think the same, join us
FT Series The best long reads of 2020
See all 15 stories
Life & Arts

The rise and fall of the office

At first offices resembled factories. Later they became a second home. Is this the end of the water-cooler century?

In 1903 the architect Frank Lloyd Wright designed something that looked nothing like a modern office. The Larkin Building in Buffalo, New York, had the form of an enormous brick.

Yet it marked the start of an era. The innovations included air-conditioning, filing cabinets and wall-hung toilets. In case those features didn’t maximise the output of Larkin’s mail-order employees, Wright chiselled into the stonework huge motivational words — such as “Intelligence”, “Enthusiasm” and “Control”.

The office was the defining building of our times. It had developed an atmosphere as distinctive as the sports stadium or the cathedral. It had inspired great art — much of it tragicomic — from the Oscar-winning 1960 film The Apartment, to the TV shows Mad Men and The Office, and the cartoon Dilbert.

Now, in the coronavirus-induced lockdown, it seems likely that something has not just paused, but passed away. Offices will open again, but with new rules and with less importance. This week Twitter told employees that they can work from home “forever”.

In a few short months, the office era — that period when working in an office was the default setting for the professional class — has died. The key space where white-collar workers interact will no longer be the four walls of an office; it will be the four sides of a screen.

If it’s clear that the office era ended in 2020, when it started is more debatable. As early as 1731 the East India Company had “300 clerks, notaries and accountants scribbling figures into vast leather-bound ledgers,” according to the writer William Dalrymple.

The office era was born when desk jobs became a mass aspiration — around the turn of the 20th century, when the telegraph and the railway combined to foster large companies with central headquarters. Offices arrived so quickly then, notes Nikil Saval in his fascinating book, Cubed: A Secret History of the Workplace, “people didn’t know what to do” with them.

In its youth, the office remained partly a paperwork factory. It was not physical labour like the factory, but neither was it intellectual. A third of white-collar workers were clerical staff. Like sweatshop seamstresses, they sat in rows, all facing the same way.

Bright women were sucked into such roles. In the 1940s, one Cambridge graduate, Margaret Anstee, was so determined to avoid the trap that she refused to learn to type; she ended up being a different type of secretary — UN under-secretary-general. The gender gap would narrow, but never disappear.

In 1956 the number of white-collar workers in the US overtook the number of blue-collar workers for the first time. Not everyone was delighted. The same year, the journalist William Whyte published The Organization Man, a diatribe about Americans’ willingness to conform, particularly to office life.

He complained that workers were satisfied with “a good job with adequate pay and proper pension and a nice house”; he urged them to rebel by cheating on office personality tests. Whyte’s book meshed with left-wingers’ despair about white-collar workers, who refused to unionise and often accepted sub-factory wages.

Mad Men, the AMC show about a New York advertising agency from the 1950s, showed how individuals negotiated the hierarchies and the alcohol. Could you have a separate identity in the office? You could certainly have an affair. But your home life was judged. A headhunter told the New York Times that a man would be less likely to get a top job if his wife lacked “a sparkling social personality” or was too “opinionated”.

Office life was so potentially all-consuming that management writer Peter Drucker urged workers to develop a “serious outside interest”. (He himself chose oriental art.)

Attempts to humanise the office had begun. From the 1950s Quickborner, a firm of German designers, had tried to turn networks of private offices into free-flowing landscapes. This kick-started a decades-long battle between privacy and openness.

In 1974 Norman and Wendy Foster designed the Willis building in Ipswich, where workers could see each other on different floors, and where there was a shared swimming pool and roof garden. Hierarchies were crumbling. Today few executives sit on a separate floor.

Other aspects of the Mad Men era would fall away too. Drinking and smoking became rarer; sex and race discrimination became illegal. Friday pub lunches would continue into the 1990s and, in some British workplaces, beyond.

As clerical work declined, and the knowledge economy took off, the office looked less like a factory. Yet the alienation remained. Scott Adams, who went on to create Dilbert, used to prepare budget spreadsheets for a telephone company. “About 60 per cent of my job at Pacific Bell involved trying to look busy,” he recalled. He gave up hopes of scaling the hierarchy after being told that the company needed to promote fewer white males.

Offices were filled with people who felt their potential was being similarly overlooked. Then again, as Albert Einstein reassured his future wife before he took a job at the Swiss Patent Office in 1902, “Certain people find everything boring.” (Einstein claimed his desk work helped his theorising.)

In Europe, where the premium on space was higher, the open-plan office took hold. But it too left employees uneasy. “As primates we evolved to be comfortable when our back is protected but we can see out. What an open-plan office does is it just makes you completely exposed,” says Grant Kanik, a workplace consultant at Foster + Partners. “You’ll never find a monkey out in the middle of the savannah.”

As the office aged, it had become less formal and less secure. Support functions were offshored to India; cleaners were outsourced. You didn’t stay in the same office for life. Lay-offs became more frequent; executive pay rose.

Filing cabinets, dictaphones, USB sticks — the props changed, but some plot lines remained the same. Office-workers had to balance profit and pleasure, hierarchy and dignity, friendship and business. No office-worker could avoid the existential questions: why am I here? Does anyone appreciate me? Are my colleagues also my friends?

What bound the offices together was mutual recognition. In the outside world, no one understood your highly specialised job (in the sitcom Friends, no one could even name Chandler Bing’s). In the office, there was probably someone who could relate with your triumphs and your frustrations. The flipside was a petty battle for status. Even as companies did away with Mad Men-style offices, they retained their hierarchies — witness the division in banks between front, middle and back-office staff.

There are experiences you can only have in the office. Packing your belongings into a cardboard box after being fired. Spending an eternal two minutes in a lift with your superior. Watching an argument between colleagues that had nothing to do with you. Having your lunch stolen from the fridge.

But was the office itself really needed?

The internet loosened the office’s grip on workers’ lives. In the 1980s and 1990s, nearly 20 per cent of straight couples met through or as co-workers, more than met in bars or at college. The proportion has halved since then, while online dating has surged. (A contributing factor was some offices banning relationships.)

The internet also brought the office into workers’ homes. In the late 1990s, “maybe once a year someone would call you at home. And when you were on holiday, you really were on holiday,” recalls Mark Thomas, a British management consultant.

This boosted the possibility of working from home, and in turn created a new tension — between the serendipity inside the office and the interruption-free productivity away from it. “A busy office is like a food processor — it chops your day into tiny bits,” Jason Fried and David Heinemeier Hansson argued in their book Remote: Office Not Required.

It mattered that offices had become less comfortable. Commuting by public transport was a squeeze. Property prices meant less space (the average US worker’s floorspace shrunk by one-sixth between 1994 and 2010). The open-plan office killed conversation. A Royal Society study found that face-to-face interactions fell roughly 70 per cent in two firms that moved to open offices; workers emailed instead. Even some workers who think they spend all day in meetings actually spend much of it at their desks, reacting to emails, says Foster + Partners’ Kanik. In the early years, white-collar workers were under surveillance and strict instructions. As everyone started staring at screens, the risk went the other way — too little management.

Most workers felt that they had to be in the office, lest someone answered their best landline calls or forgot their importance. “Because the knowledge economy is so hard to measure, we’ve elected to focus more on presenteeism far more than we’d like to admit,” says Bruce Daisley, author of The Joy of Work.

When was the high point of the office era? It depended too much on who you were and where you worked. Maybe the best is still to come — in the office era’s afterlife. Silicon Valley has pioneered campuses that conspire to keep young employees from leaving. While others try to make home more like the office, the Valley has made the office more like home — dress down, bring your dog. In central London alone, over 15m square feet of office space is under construction, according to Deloitte Real Estate.

Home-working may disappoint; it may fail to foster the flexible collaboration on which the knowledge economy relies. “There’s a danger that people become much more bimodal: they’re either in a formal meeting, which is a videoconference, or they’re doing very reactive computer work,” says Kanik.

Perhaps we should accept that the office and the home are slightly different experiences — like print and digital newspapers. The pandemic just alters the balance between them. We will go back to the office, but not as often. Those with most to mourn might be the young, who have the least space at home and the most to learn in the office.

In 1956, William Whyte summed up the organisation man as someone who had “left home, spiritually as well as physically”. Physically, we will now spend more time in our homes and our neighbourhoods; perhaps we will return there spiritually too.

Follow @FTLifeArts on Twitter to find out about our latest stories first. Listen to our podcast, Culture Call, where FT editors and special guests discuss life and art in the time of coronavirus. Subscribe on Apple, Spotify, or wherever you listen.

Get alerts on Life & Arts when a new story is published 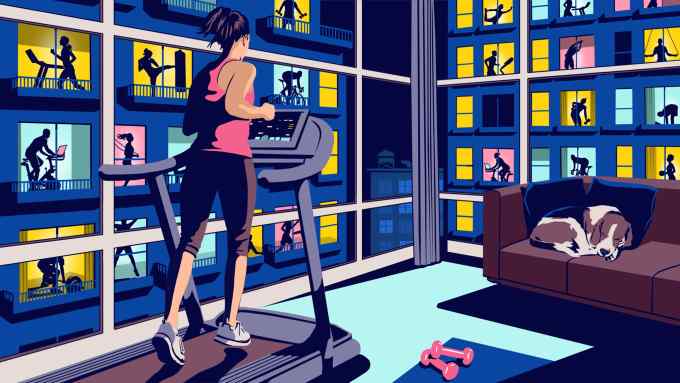