London Fashion Week poses a question — what is fashion anyway?

What is fashion? What does it mean? What does it stand for? Is it innovation, cut and form? Or is it about the collective desire to wear flares again?

Jonathan Anderson’s fixation with fashion should come as no surprise. As the designer of his own namesake label, and as creative director of Loewe, his run on the hamster wheel of creativity is more exhausting than most. As the architect of around a dozen collections each year, as well as countless other spin-off projects, this season he was asking what really excites.

“I was thinking about fashion and empowerment, and putting yourself out there. For me, fashion is about fluidity. And movement. It’s about clothes.”

Anderson has always pushed the limits with his ready-to-wear: from the men’s skirts and dresses he offered in his earliest collections, to his more outlandish silhouettes of today, he’s not afraid to put himself out there. In recent seasons, his collections have been more sophisticated, and less silly, but he still likes to experiment with taste. This season, he had used a “patchwork of textures” — lace, crochet, leopard print, macramé — to create longline collections of layered dresses, yoke-fronted tunics and chequerboard style silk pyjama suits.

It was good. Some of the styling was a little heavy handed, I could have lived without the washerwoman headscarves, but individually there was much to admire. The looks were loose and layered and languid, and there were some good grown-up blazers and suiting as well.

Ready-to-wear is only one story. According to estimates, JW Anderson is now approaching revenues of £20m a year, and it’s safe to say his business is not built on patchwork linen skirts. This season marked the brand’s third collaboration with Converse: and Anderson’s latest take on the sneaker found it bouncing on a chunky space-age sole. Designed to satisfy younger clients who are looking for a more accessible entry to the label, I expect they will sell out just as quickly as the last. Likewise the bags, which this season included a big canvas shopper with leather trim, an evening clutch and a saddle bag. Stylish, desirable and efficient, it’s these fashion-proof pieces that really grease the business of the brand.

Alexa Chung, showing her first catwalk collection on the London schedule since launching her namesake label last year, is less about determining new fashions than she is about making clothes that look a bit like her own. Her collections typically unite things we have already come to know her for: feminine frocks, utility denims and Seventies influences that take in everything from glam rock to David Hockney, and from Jane Birkin to Bianca Jagger.

This collection was a sweet synthesis of more Chungish things: a suede pinafore dress and trenchcoat and crisp denim overalls were standout, while a souvenir scarf silk printed with “Bognor Regis” and other British resorts had an easy-going charm. “I’m here to show I’m taking this seriously,” said the designer who is still often looked at as a dilettante. “I wanted to stage a show, to prove that I this brand has got longevity.” None of it will change the course of fashion, but it felt sincere.

Michael Halpern felt the white heat of fashionability almost immediately after launching his brand in 2017. His sequin-smothered disco dresses, pantsuit and tunics seized a space in the evening market that had previously been unoccupied. And then a host of imitators rushed into it as well. For SS19, Halpern was still looking to the disco, but the sequins were more contained, arranged in bricolage mosaics and graphic stripes on dresses, skirts and bucket hats. The colours were electric bright, and primary. The heels were sky high. There was another fabric, too, in soft gold, that wrapped the body like Bacofoil. Not that he’s giving up the sequins. He was simply mixing it up.

It didn’t feel as fabulous as usual. Neither did Molly Goddard, another London designer who has been scorchingly successful with a signature fabric and silhouette, but who was also pushing new styles this season. For SS19 show, she introduced a shiny patent coloured handbags, floral knits and lots of ruffled skirts. It was different, and it didn’t quite connect.

It’s not surprising that when a comparatively new designer has been cannonballed into the spotlight with such force. How much do you hold on to what made your name? How far must you move on? Halpern and Goddard have created looks and styles that have been the bedrock of their nascent labels. Both are now experimenting, with mixed results. But experiment they must. And who knows, Goddard may have cracked a new category with her bags. We’ll have to see. But perhaps the trick to fashion is never to be too fashionable. 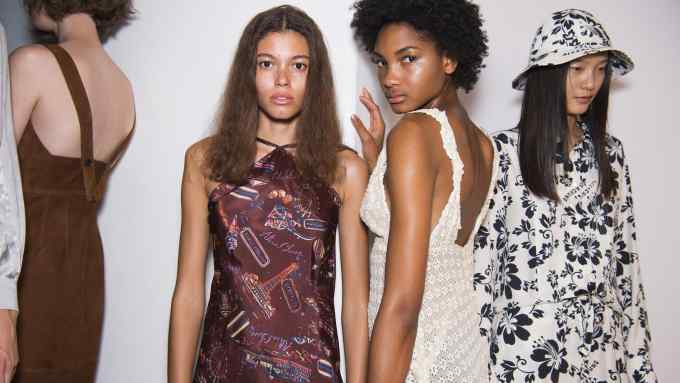