If you think the same, join us
Online learning

The pandemic created a live experiment in online teaching. So what did we learn?

When Samantha Roberts moved from Arizona to Berlin to do an MBA, she expected to study cheek by jowl with classmates. MBAs are often sold on the quality of their students, who come from different walks of life and countries, and learn from each other as well as the faculty.

Two months after Roberts enrolled at ESMT Berlin, the coronavirus lockdown in March forced an overnight switch to online learning, reducing her opportunities to build a network, while job prospects became uncertain.

Roberts, who wants to change career from finance to a tech start-up in Berlin, says initially she felt glum. “I paid a lot of money for this MBA — am I really getting the same experience online? I sacrificed so much to be here, but I could be doing this from the US.” Tuition and fees (excluding travel for international exchanges) for the ESMT course are €43,500.

However, as Roberts adapted to remote study, unexpected upsides became apparent. For instance, she could learn at her own pace, revising and revisiting recorded lectures where necessary, so she was more likely to grasp the material. “I was so upset about studying online, but it ended up being a blessing in disguise,” she says.

The pandemic sparked a live global experiment in teaching full-time MBAs online. Digital delivery of business courses shot up from 8 per cent before coronavirus to 68 per cent during the pandemic, according to research from the Association of MBAs (AMBA) and the Business Graduates Association (BGA). A year on from the outbreak, what have business schools learnt? 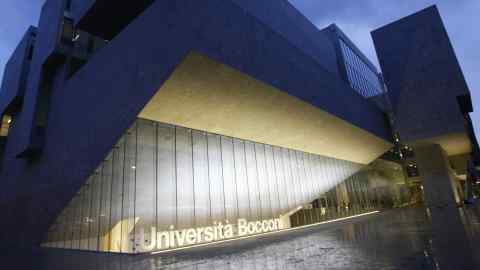 Through trial and error, they have found new ways in which technology can be used, drawing up a blueprint for the MBA in a post-pandemic world. As vaccines reduce the impact of Covid-19, deans predict that hybrid models will replace the traditional classroom-based delivery of MBAs in the next five years, according to the research.

“Last year, for many, represented a tipping point that has undoubtedly taken business education into a new phase from which we may never return,” says Andrew Main Wilson, AMBA chief executive.

Business schools are now reimagining which aspects of the MBA should be delivered online and which are better experienced in person. “Through practice and revision, conceptual content can be more easily learnt online, whereas discussions, application of theory and contextualisation can probably be achieved more efficiently in the classroom,” says Nick Barniville, associate dean for degree programmes at ESMT.

Technology has made MBAs more flexible and accessible for students around the world, and broadened the range of executives giving guest lectures and companies recruiting students for jobs or consultancy projects.

“I had a student tell me they had ‘visited’ five countries in one day on experiential projects,” says Scott DeRue, dean of Ross School of Business at the University of Michigan, noting that this saves time and money on travel while reducing carbon footprints. Like many of his peers, he says students who are typically reserved in a classroom setting are often more willing to speak up online, and the wider range of perspectives this brings enriches group discussion. Virtual breakout rooms can also be more efficient than splitting students into physical groups.

However, studying online makes socialising more difficult and may increase isolation. Francisco Veloso, dean at Imperial College Business School in London, says hybrid models can create a two-tier cohort and sow division. “You have to be very careful not to make online students feel like second-class citizens.”

His potential solution is dedicated staff — “co-pilots” — who monitor the engagement of online students and pass feedback to the lead instructor. The tutor can then make real-time adjustments to teaching — for instance, repeating themselves if there is an audio glitch, or giving remote students the floor if they raise a virtual hand to speak. 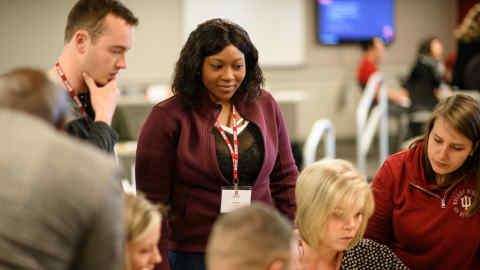 Thomas Roulet, deputy MBA director at Cambridge Judge Business School in the UK, says digital fatigue is a problem, while students also miss out on the serendipitous “water cooler” conversations that often spark ideas. Online interactions are more scripted, interjections more awkward (though a chat feature helps combat this) and Roulet says it is harder to read non-verbal cues.

Many schools say that in future, students might master asynchronous content (learning in their own time) online before coming to class for group debate and to put theory into practice. “Lectures do not work online, because it is more difficult to retain [students’] attention. There are more distractions,” says Paul Almeida, dean at Georgetown University’s McDonough School of Business in Washington DC.

Through assessing online prep work, professors can use the data to tailor classroom discourse around the subjects students struggled with, says Prof Almeida. Yet while technology can increase teaching efficiency, many schools say sceptical professors are a barrier to digital adoption.

“There is still a generation of teachers who are not ‘digital natives’ and feel uncomfortable in the virtual world,” says Julie Perrin-Halot, associate dean at Grenoble Ecole de Management in France. However, with training, she says even the most resistant educators are coming around. Grenoble has invested €1.2m in 32 HyFlex (hybrid-flexible) classrooms with screens, cameras and sound systems, allowing remote students to join classes on campus.

Some schools will find ways to reinvent themselves, while others will cease to exist

Other schools, though, may struggle to invest in fresh infrastructure, given the sharp recession, says Prof DeRue at Michigan: Ross. He expects a digital divide to grow between schools, perhaps leading to consolidation or even closures. “Some schools will find ways to reinvent themselves, while others will cease to exist,” he says. “Over the next decade, we will see more change in the business school landscape than in the past 20 to 30 years.”

He says the boundary between online and campus MBAs is blurring. Echoing this, the AMBA survey found deans believe digitisation is their most important challenge and 83 per cent expect the MBA to be transformed in the next 10 years. As Prof Almeida puts it: “When [Covid-19] is all over, we will not be returning to the world as it was in March. I hope we will build something much better.”

Get alerts on Online learning when a new story is published