Lead the way with 50% off
FT Collections Data rich: the numbers behind corporate news
See all 71 stories
Electric vehicles

Sign up to myFT Daily Digest to be the first to know about Electric vehicles news.

Last January, Europe’s carmakers were gearing up for their most challenging year in recent memory — one in which they would be forced to vastly expand their sales of electric and hybrid cars or fall foul of tough new emissions regulations and risk hundreds of millions of euros in fines.

Then came Covid-19, and lockdowns that brought assembly lines to a standstill for weeks, delaying for several months the rollout of key emissions-free models, such as Volkswagen’s flagship ID. 3.

The result was a late dash, as manufacturers saw their finely honed strategies torn up by events.

Of the nearly 730,000 battery electric vehicles sold in western Europe during 2020, over 300,000 were delivered in the last three months of the year, according to research by Bernstein.

Some carmakers, such as Daimler, only crossed the line after a concerted effort to drive sales right at the end of the year.

Volkswagen narrowly missed its target, despite teaming up with over-compliant rivals such as MG and the London EV Company.

Jaguar Land Rover was also forced to pay penalties, despite a late push that saw its electric Jaguar I-Pace account for 69 per cent of the brand’s western European sales in December.

Carmakers were aided in their electric efforts by governments that ramped up incentives for battery-powered cars in an attempt to boost economic activity.

Sales in Germany, which tripled year on year, were supercharged by Angela Merkel’s government deciding to double subsidies for electric cars, resulting in customers being able to avail themselves of a €9,000 discount per new vehicle.

Inquiries for new electric cars rose by 80 per cent in the second half of the year on Germany’s AutoScout24 site, the market leader, and 13.5 per cent of cars sold last year in the country were battery-powered, according to the VDA industry lobby group.

Jochen Kurz, a director at AutoScout24, said “the next few months will show whether demand can continue at this high level”. He added that “the decisive factor here will not be the cost subsidies alone, but also the expansion of the charging infrastructure”.

The number of UK consumers searching online for an electric car doubled overnight after the government’s announcement of a phaseout of petrol sales by 2030, according to Auto Trader.

During the year, one in six new cars bought in the UK was electric or hybrid, official figures show.

For legacy carmakers, the year was an opportunity to plant a stake in ground previously dominated by Tesla.

The mass-market brand with the highest proportion of electric sales across Europe last year was Hyundai at 13 per cent, due to the popularity of its electric Kona model.

European president Michael Cole told the FT he expects new plug-in hybrid variants of its flagship SUVs, the Tuscan and Santa Fe, as well as a new battery-only vehicle will see its electric mix increase.

Yet it was Renault’s eight-year-old Zoe model that finished as the most registered model last year in western Europe, accounting for some 95 per cent of the carmaker’s full-electric car sales and surpassing both Tesla’s Model 3 and the ID. 3, according to research by analyst Matthias Schmidt.

In fact Tesla was the only carmaker to suffer a fall in pure electric sales with its market share falling by 16 percentage points to 13.4 per cent in 2020 — though analysts attribute this fall to the impact of Covid-19 on its distribution channels to Europe.

Volkswagen, the market leader in Europe at a group level, selling almost 174,000 electric cars in the region, plans to push harder this year with the Wolfsburg-based company aiming to more than double electric car sales. 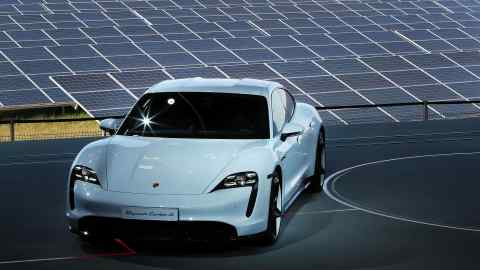 Others have set similar targets for the coming year.

“We aim to increase the sales of our electrified vehicles by more than half in 2021,” said Mr Nota at BMW, “and that underlines the importance of electro mobility as a major growth driver in the company.” Within that target, BMW aims to double the sales of fully electric vehicles in 2021.

Despite most European manufacturers meeting, or even exceeding, their individual CO2 targets, campaigners have criticised the use of hybrid models, which combine a petrol or diesel engine with a battery-powered drivetrain, to make up the gap.

Although these vehicles can be driven for short distances using the battery alone, environmental groups say the vast majority of hybrid owners rely solely on the combustion engine.

“I would expect that hybrids will go down rapidly when fiscal stimulus is reduced,” Audi boss Markus Duesmann told the FT. “When the subsidies end for hybrids, no one buys them . . . because it's not the real thing.”

Video: How cities around the world are tackling climate change