Six books competing for the £30,000 award offer insights into corporate culture and a post-pandemic world

Books about the future of work, corporate culture, technology and the US economy feature among the six finalists for Financial Times and McKinsey Business Book of the Year.

Vivian Hunt, senior partner at McKinsey, announced the shortlist for the £30,000 prize at an online event on Wednesday. The eight judges will select a winner and present the prize on December 1.

Deaths of Despair and the Future of Capitalism, by Anne Case and Angus Deaton, which is based on the authors’ findings about the rising mortality rate among white non-college-educated Americans;

If Then, Jill Lepore’s history of the Simulmatics Corporation, founded in 1959, whose legacy can be detected today in the work of companies such as Google, Amazon and Facebook;

No Filter, by Sarah Frier, about what happened after Facebook bought its rival picture-based social networking site Instagram in 2012;

No Rules Rules, by Reed Hastings, founder of Netflix, and Erin Meyer, who explain and analyse the media group’s radical culture;

Reimagining Capitalism, by Rebecca Henderson, about the climate emergency and how government, society and purpose-led businesses should tackle it;

A World Without Work, Daniel Susskind’s analysis of the future of work and what to do when machines make human work obsolete.

Roula Khalaf, Financial Times editor and chair of judges, said the list emerged following a “robust debate” about a “particularly strong field”. The longlist consisted of 15 titles, itself distilled from more than 400 entries.

Dame Vivian described the shortlisted books as “potential guides on how to rewire companies, organisations and societies for the post-pandemic next normal”.

This is the 16th edition of the Business Book of the Year Award, first presented in 2005. The prize goes to the book that provides “the most compelling and enjoyable” insight into modern business issues. Runners-up will each receive £10,000. Last year’s winner was Caroline Criado Perez for Invisible Women, an examination of how designers and developers have perpetuated bias towards men in the data they use.

Guest speaker at December’s digital awards presentation will be Laxman Narasimhan, chief executive of Reckitt Benckiser. At the same time, the £15,000 Bracken Bower Prize, also backed by McKinsey and the FT, will be awarded. The prize, which is offered to writers under 35 for the best business book proposal, closes for entries on September 30.

Read more about the Business Book of the Year Award at www.ft.com/bookaward 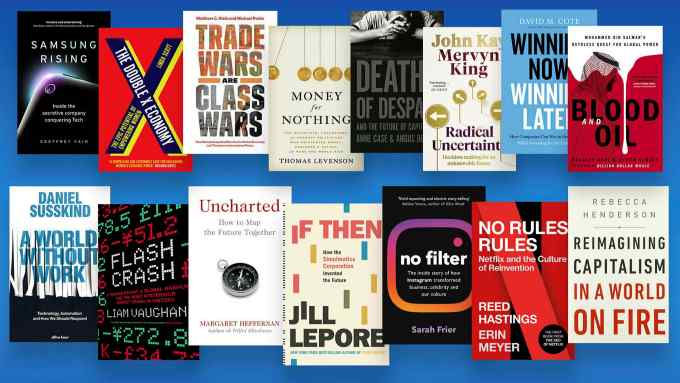