Tailoring maverick Peter Do is moving into menswear

The New York-based designer has won women over with his sharp but languid tailoring. Can he do the same for men?

People keep asking Peter Do about the metaverse, backstage at his catwalk shows and in meetings with potential investors. But virtual fashion bores the 31-year-old Vietnamese-American designer. “You can sell it without even making the garment,” he says, remembering a frustrating conversation. “I was like, then why do you need me?”

Do is trained in tailoring and is known for his namesake brand’s sharp but languid suiting. For him, every step of creating fashion is a vital hands-on process. “No one sees all the effort that goes behind it,” he says. “The dialogue, the working with people, going into factories, preserving craft… All those things are important for me.”

We are speaking on a summer morning at his studio inside a converted warehouse in the Sunset Park neighbourhood of Brooklyn. Do sits at a work table covered in fabric swatches and sketches. He’s not wearing the trademark black mask that he dons for photographs and public events. He started covering his face long before the pandemic to symbolise his rejection of the celebrity that surrounds successful designers, and the habit has stuck. Despite what such a statement might imply, Do has a youthful, warm demeanour. He laughs easily.

Since launching his label in 2018, Do has earned acclaim for his oversized silhouettes and sexy detailing. Do’s first runway show, staged as part of New York Fashion Week in September 2021, charmed traditional critics and social media commentators alike, turning his follow-up in February 2022 into one of the city’s must-see shows. His next show, held this month, sees Do debut one of his most ambitious projects: his first menswear collection, presented alongside his latest range for women.

The designer says all genders already buy Peter Do coats, knits and handbags. Instead of presenting a whole new design aesthetic for menswear, Do is extending his existing vision by rethinking several of his core pieces, including dress shirts and trousers, to accommodate wider shoulders and narrower hips. He is also introducing new unisex shapes such as a cashmere-wool hoodie and an adjustable pleated kilt. As a result, a much wider range of body types will be able to wear the brand. “The wardrobe is really meant to be shared,” he says.

Do loves to subvert gendered expectations in clothing by, for example, often not including buttons on blazers. Traditionally, men’s and women’s jackets button from opposite sides. “You can just wrap however you would like to wrap it, you know?” he said. “It’s so silly that people have bound this garment in a specific way.”

Do’s journey to the centre of luxury fashion was an unlikely one. Born just outside Ho Chi Minh City in Vietnam, he emigrated to Philadelphia when he was 14 years old. He transferred to New York City’s Fashion Institute of Technology, where his 2014 graduate collection – including a translucent, tailored cocoon coat – won him an award from luxury conglomerate LVMH. The prize included a one-year contract to work at any house of his choosing. “It was Céline or nothing,” Do says. Phoebe Philo, the house’s influential creative director at the time, was the only designer making clothes he connected with.

A few months later, he was living in Europe, commuting between the Céline offices in London and Paris. Even though he was assigned to design his least favourite category – dresses – Do was transformed by the experience. “I learned to appreciate that dialogue between the people who made the clothes and [people like] me, the designer.”

Do stayed at Céline until 2016 and, after a stint at Derek Lam in New York, decided to start his own line. He was determined to structure his start-up brand without the strict hierarchies that dominate luxury fashion. Instead, he and his four co-founders established a collective that has evolved into more defined roles over time. The co-founders regularly meet to discuss “the identity and the vision of the brand, and how all of us see and view it”, says Vincent Ho, the CEO. “There are so many other brands where [as they grow] people lose touch of their beginnings or where they’re going. Because we are all so different, we’re able to keep each other grounded.”

At the start, Do was advised by people in the industry to make his products cheaper. Few believed “some random kid” could convince customers to spend $2,800 on a blazer when Maison Margiela sold one for less, he remembers. He was conscious that much of women’s fashion was designed to be less functional and more disposable than menswear. He wanted to offer women better fabrics and finishes, and to “rewire people to appreciate tailoring”. Eventually, stores and customers came to appreciate the weight of his double-faced cashmere and the utility of a blazer with a detachable skirt layer.

He also delivers the quality and clever functionality that brings in luxury shoppers. One sample he pulls out to show me is a trench coat designed to be two in one: polished on one side (clean and lined with waterproof tape) and weathered on the other side (the effect of a resin dye). “Fashion changes all the time,” Do says. “If a garment can allow you to adjust and adapt, then you don’t have to constantly seek out newness.” Similarly, you won’t find any logos on his garments – but those in the know will recognise the line motif that runs from the neck to the wrist on many pieces – a replica of the designer’s own distinctive tattoo.

“His exacting eye for extraordinary tailoring means that the pieces are deceptive in their simplicity but also carry with them a certain ‘cool’ factor,” says Yumi Shin, chief merchant of Bergdorf Goodman. (The New York department store started selling Peter Do in 2020, and will carry its first men’s and unisex line for spring 2023.) 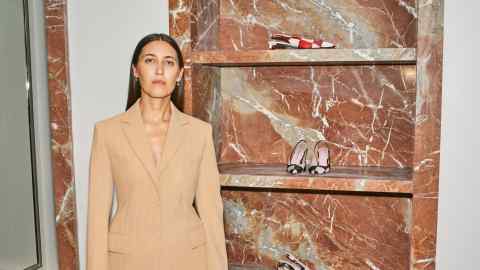 Selling a three-piece suit is still a niche operation in a world of hoodies and sweatpants. Yet Do’s sales are consistently doubling each year, and he wants to keep elevating the label’s quality and expanding its range. He admits he’d now like to run a more stable operation. “After the show’s over, I go straight into, how are we going to produce it, how are we going to pay people, how do we scale,” he says. To date, the brand is funded by friends and family. Do and his co-founders “constantly talk about the next steps”, including external investment.

“[Sometimes] I have a meeting with people and I feel like even though we both speak English, we may as well be speaking different languages,” Do says. “You could be like, ‘Oh yeah, I want to build an atelier.’ And they’d be like, ‘Data, data, data.’”

In the meantime, Do is looking to his runway show. He has a new iteration of the Peter shirt, a roomy cotton button-up with the tattoo motif. He’s been tweaking it for at least three years and finally feels satisfied. It will stand in contrast to another of his designs, a dramatic Alexander McQueen-inspired gown. “The dress took me 20 minutes to design, but that [shirt] took me five years. And that [shirt] is more for everybody, whereas the gown is for the one per cent,” he says. “The question is, which is luxury?” To Do, the answer is obvious.