Lanserhof lands on the island of Sylt

The internationally renowned spa has a new outpost on the Frisian island – but will the locals come on board with the Cure?

Sylt, a crocodile-coloured smudge in the Frisian archipelago, has been dissolving into the ocean since it emerged as an island eight centuries ago. Each year approximately 1m of coastline is lost; it costs Germany an annual €10mn to pump the seabed back onto the shore. You can see the sediment sweeping across the wild heathland, over thatched roofs and out into the North Sea. Legend has it that visiting children have been asked to shake sand out of their shoes before leaving. Even sandcastles are said to be forbidden.

The arrival of Lanserhof, then, is an ironic proposition: a medical resort bent on prolonging life, built on a shifting landmass that might not survive another 100 years. But Lanserhof is determined to spread its roots: perched among the sand dunes of List, the island’s most northerly town, the €120mn, 20,000sq m development peeps out at the horizon from under a colossal thatched roof (the largest in Europe). Inside, 55 rooms and suites mirror the heather-flecked surroundings with soft woods, slate greys and mossy suede. The wellness side, however, is serious business, offering more than an acre’s worth of stark white treatment rooms, gym space and an indoor-outdoor saltwater pool.

It’s a luxury concept for a luxury island, part of the most expensive district in Germany and where a 100sq m property will set you back around €1.8mn. Prices have been rising steadily since the 20th century, when Sylt began playing host to notable German holidaymakers who came for the marine climate and brisk sea winds. Marlene Dietrich brought her violin, Gunter Sachs cruised the beaches on a BMW Motorrad and footballer Günter Netzer became a regular at Fährhaus Sylt, a five-star hotel overlooking the tidelands.

Gathering around Kampen, the island’s elite heartland, such figures paved the way for an influx of über-wealthy part-time residents, who hide out in hidden cottages, drive discreet cars and throw loud, conspicuous parties. During the week of my visit, Germany’s finance minister Christian Lindner hosted his wedding party here, inviting 140 guests including Chancellor Olaf Scholz.

I have come to Sylt to be cured – mostly of calories, but also toxins, stress, inflammation and lethargy. The new resort, which opened in May, is Lanserhof’s third outpost to practise the Cure Classic, a programme based on the work of Austrian physician Franz Xaver Mayr, who in 1915 discovered that a happy gut – achieved through fasting and detox – is the key to overall health. (Today there’s evidence that fasting can be a factor in helping to slow or even stop the progression of some cancers.) First launched in the ’80s and updated for the 21st century, Lanserhof’s edition offers a tailored regime of rigid dieting, medical therapies and purging epsom salts. The goal? To live the longest, healthiest life possible.

But Lanserhof is no beauty spa, warns medical director Dr Jan Stritzke, a sprightly man prone to sharp and excitable hand gestures: “It is a clinic!” Stritzke started out in university hospitals, but found it too much like “being in a garage”. “Fix me,” his former patients would demand, with little concern for what they could do outside of the medical centre. Frustrated by the lack of concern for overall health, Stritzke joined Lanserhof – clinic to the likes of Gwyneth Paltrow, Victoria Beckham and Christian Louboutin – where he’s been working for the past seven years.

Under the Lanserhof regime, guests undergo an extensive examination that includes body composition, blood pressure, heart rate, and blood and urine analyses. From there you’re assigned a diet plan between Levels 0 and 3 – 0 being the most stringent, at 50 to 100 calories per day – and a personalised therapy strategy informed by your goals (anything from weight loss to recovery from a major heart attack). The rest is up to you, with the hope that you’ll carry everything you’ve learned out into the outside world. “The patients in my office are highly motivated,” says Stritzke. “They have a successful life, they know how to deal with projects, and their next project is their health.”

I start my own project on Level 0, a basic mix of herbal tea and clear vegetable broth – a tall order for a die-hard snacker. Under the guidance of Stritzke and nutritionist Salla Schmilewski, there are a few things I learn quickly: chorizo, my greatest vice, is truly terrible for you, even worse than sweets or chocolate. One to three bouts of diarrhoea while fasting is “optimum”. Raw food in the evening is too difficult for your body to digest. And, above all, the key to a healthy gut is leaving four to six hours between each meal. This allows your body to stop producing insulin, a hormone that prompts cells to absorb carbohydrates, and turn its attention instead to breaking down its own fat reserves.

“You’re in crisis mode,” Stritzke tells me as I clamber onto a medical bed, where he conducts an abdominal massage to stimulate digestive function. By day two, the stringent meal times and absence of sugar and coffee have left me with nausea, headaches and night terrors. Stritzke ensures me that it’s all part of the plan. Once my body has started purging its fat, he says, I’ll get a rush of ketones. Cue the fabled state of “ketosis”, side effects of which include weight loss, increased focus and mild euphoria. I eagerly await his promise.

If Stritzke is the brains behind the resort, then Dietmar Priewe, its head chef, is the gut. Priewe is a former chef at Sansibar, a beachside restaurant popular with Sylt’s celebrity guests (including Lindner’s wedding entourage). The money was good, he says, but the lifestyle was too much; at his heaviest he weighed more than 250lbs. Today Priewe dishes up locally sourced fish, vegetables and cheeses, a diet that he – now 70lbs lighter – follows himself. “I lost the clouds in my brain,” says the 47-year-old. “I have a biological age – I think – of 25!”

But what do Sylt’s residents think about Lanserhof? “It’s a little bit difficult,” cautions Priewe, who has lived on the island for 22 years. Sandwiched between List’s east and west beaches, the resort enjoys one of the best views on the island: infinite Wadden Sea, swaying beach grass and quaint, Frisian-style houses of neat red bricks. It’s fortunate for Lanserhof – which has been built cleverly into the ground, with the sand redistributed around the island – that the surrounding residences are mostly holiday homes. But a mile or so to the north, away from the manicured lawns and freshly painted shutters, List’s few remaining locals see the enormous thatched roof as a mark of irrevocable change.

“It’s a colossus in the dunes,” says Elisabeth Westmore, a local historian and descendant of one of Sylt’s original families. Westmore grew up on the eastern side of the island just before tourism really took off. Back then it was “idyllic, everybody knew each other”, a community mostly made up of Frisian-speaking farmers and merchants. Today Sylt’s tiny, 38-mile surface area welcomes around 850,000 tourists each year – almost 40 times the actual population. Lister Hafen, the picturesque harbour where I meet Westmore, is an acute manifestation of the change: a peek inside the pastel-coloured clapboard shopfronts reveals only ice creams, postcards and expensive souvenirs.

Lanserhof, Westmore fears, will add strain to an already overrun island by opening it up to new clientele. Until now Sylt has mostly been frequented by Germans, but Lanserhof has strongholds in the UK, US, the United Arab Emirates and – before the war in Ukraine – Russia. With a starting rate of €7,000 for seven nights (the minimum stay), the resort adds a new wealth disparity between residents and tourists. “They won’t come for the beauty of the island, they’ll come to get healthy and enjoy their millions,” says Westmore. “Very few people will benefit.”

If you want to see a (mostly) untouched part of Sylt, take one of the resort’s ebikes to the Ellenbogen (elbow), the heathery sand dunes at the tip of the island. Westmore drives me there in her tiny blue car (“the smallest on the island, because I’m local”), pointing out the old military buildings along the way. Before Sylt was a tourist destination, it was used as a defence line in both world wars. The fact that a resort could even be built on the dunes – much of which were historically protected as nature reserves – is because the area is a former military compound; Lanserhof acquired the plot for an undisclosed price. But at the tip of the elbow, all of this is forgotten. “This is the end of the world,” jokes Westmore, looking out at the stormy vista, an area only frequented by the most daring of kitesurfers, along with the odd porpoise.

By day five, my list of achievements is long and varied: I have climbed to the top of the climbing wall under the watch of a personal trainer; I have endured an hour-long infusion of energy-boosting nutrients; I have been offered Botox between my eyebrows (and politely declined); and I have had hypnotherapy for my periodic smoking habit. Some treatments are more taxing than others. Take CellGym, which alternates blasts of low- and high-oxygen air. “Do you like it?” I ask the nurse fitting my mask. A pause. “Not really,” she says. “The more you try it, the better it gets,” says another. I look at my schedule: two sessions left.

I have also graduated to a more plentiful meal plan, consisting of yoghurt for breakfast, followed by a choice of protein, fibrous breads, vegetables and, joy of joys, fruit. Dinner is always a soup, but Priewe is creative with his use of the island’s seeds and herbs. For my final meal he serves up soft slices of veal with a carrot, potato and courgette gratin. One thing the Cure is good for: no matter how small the portions are, every bite is electric.

Patients can shed as much as a stone in two weeks: I end up losing about five pounds. Aside from some subtle signs of inflammation – I’ll take a follow-up blood test in six months – my tests reveal no tendency towards certain cancers, heart disease or diabetes (which runs in my family). The latter checks are important to Stritzke, a firm believer in preventative medicine. “A heart attack is the failure of the physician,” he says, claiming that up to 80 per cent of cases can be averted. Best of all: I have an “exceptionally” high count of ketones, which, as Stritzke promised, has left me happy and alert.

HTSI
Highs on a hill – inside the fitness festivals of 2022 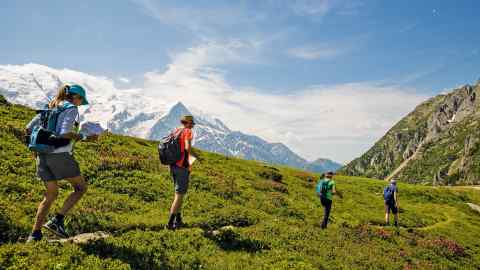 The Saturday before I leave – the same day as Lindner’s nuptials – List’s 600 or so sheep are collected for an annual shearing, a custom that goes back more than 200 years. Westmore takes me to the farmhouse, one of just 11 buildings that stood before the military arrived and the home of her cousin, another of Sylt’s descendants. The cousin, too, is concerned by the arrival of Lanserhof, which can be seen in all its spaceship-like glory from the window of her living room, an area littered with seafaring mementos.

That an age-old annual custom should fall on the same day as the finance minister’s party seems apposite for an island rooted in both tourism and tradition. That the two elements exist alongside Lanserhof, a bastion of health and privilege, is just a new chapter for an island as changeable as its shifting sands.