Inside Maison Colbert: at home with the modern surrealists

Philip and Charlotte Colbert invite you to a crustacean-filled, bosom-emblazoned fantasia

Some couples have heraldry. Others represent their lineage using homespun motifs such as acorns, bees or hearts. The union of artist Philip Colbert and filmmaker and writer Charlotte Colbert finds shape in a lobster and a uterus. And the symbols populate their new home in Spitalfields, east London, in myriad ways: there are noble-looking marble lobster busts in the living room; a spectacular uterus-shaped headboard in a fallopian-themed bedroom; and the two feature in both a carved stone fireplace as well as floor-to-ceiling curtains.

Hidden behind a façade of Victorian shopfronts on one of Spitalfields’s labyrinthine lanes, their home is a 6,000sq ft urban wonderland that seduces with sensorial charm and bizarre mystique. Where else might you find a bathtub covered in 108 silicon boobs or a huge marble coffee table inlaid with the symbol of the eye?

“We had a traditional house near Columbia Road but wanted to incorporate our studio spaces in one live-work residence,” says Philip Colbert, who has a thriving art practice creating surrealist lobster works both in the material world and the metaverse. His extraordinary Lobsteropolis interactive city occupies one of the biggest plots on the digital platform Decentraland, home to 7,000 Lobstar citizen avatars. “We are both into detail and love storytelling, and wanted to create something magical,” adds Franco-British Charlotte, who last autumn released her first feature film She Will with Malcolm McDowell, a psychological horror set in Scotland.

She and Philip met years ago through mutual friends, and their home is a tribute to their romantic and creative partnership. When it came to designing their live-work space they turned to Buchanan Studio, a London-based design practice run by Angus Buchanan and his wife Charlotte Buchanan, who oversees the studio’s productions. “We had a vision, so it was a question of finding someone to help us realise it collaboratively,” says Philip of their instant rapport. The Buchanan Studio team were inspired after just one meeting. “I went away and put together a huge document filled with romantic Tim Walker references, images of hotels such as the Colombe d’Or, and Wes Anderson scenes,” says Angus, a former set designer who for many years also worked as an art director for the late Michael Howells.

“The references were based on a feeling,” he says. “Their world is their brand – they live, eat and sleep it – and the house is the embodiment of that, but it also had to have substance: to be sensible and functioning. As the design took shape, it became more arthouse, eclectic and extraordinary.” As progress went on, a moniker began to stick. The house became “Maison Colbert”.

For Buchanan Studio, whose richly detailed interiors include private homes and commercial spaces such as London’s jungle-esque Wild By Tart restaurant, Maison Colbert was a dream commission. The project got under way in 2019, after the former shophouses had been sensitively remodelled and opened up by Chris Dyson Architects, an international practice with a specialism in history and renovation in the Spitalfields area.

The journey through Maison Colbert begins in a cobbled inner courtyard and an ascent to the hallway, from verdant and dark into dreamy and light. The hall is decorated with Italian frescoes (you might spot painted eyeballs within the vines) amid remnants of classical statues (former stage props), two marble lobster busts and an indoor boob fountain: arcs of water spout from the nipples.

A bar area and concierge desk decked in red and pink stripes, and the tasselled room keys hanging on the wall are inspired by Wes Anderson’s The Grand Budapest Hotel – a purely surrealist touch that will likely bring a smile to the faces of friends and family invited to stay. “The humour takes you off-guard. ‘A concierge desk? What the hell is this?’” says Angus Buchanan, who wanted to add “vitality” to the low-ceilinged entrance hall.

From here, the ironwork staircase leads to the games room, with a “living” green wall, designed by Dyson as an indoor-outdoor space. On this floating terrace, one is greeted by a giant totemic Niki de Saint Phalle bird sculpture, a deconstructed ceramic wall piece by American artist Betty Woodman, floral paintings by Philip, and an oil portrait of Charlotte by Francesco Clemente. The area, lined with books and objets, segues into the open-plan living area that transitions from a kitchen at one end to a dining zone at the other; two swings are suspended from the ceiling and a small red lacquered movie “snug” is tucked to one side. The centrepiece is a substantial oval marble coffee table inlaidwith the symbol of an eye.

I’m fascinated by symbols. I wear my uterus as a pendant

Furnished with bright red lobster sculptures and artworks, the warm, plaster walls take on a rosy glow, while Charlotte’s pink-toned “boob” statuettes and uterus-inspired symbols converse with the couple’s collection of 20th- and 21st-century art. “It’s mad – and such a full assault on the senses and eyes, the overall scheme required a neutral palette,” says Angus, who commissioned a painter to limewash the brickwork and create textured plaster walls as a backdrop.

The pair’s fascination with symbolism is evident throughout. “I’m superstitious and fascinated by the way symbols, magic and tarot have existed through centuries and civilisations. Symbols offer up a psychology outside of religious archetypes and have an emotional and historical meaning,” says Charlotte of her journeys into the numinous world. “I wear my uterus symbol as a pendant.”

Philip bursts into laughter at the thought of his compulsion to surround himself with lobsters. “I ask my therapist about that every day! For me, the lobster, so omnipresent in the work of the Dutch masters and Salvador Dalí, is a memento mori. It is a profound symbol that time travels,” says the creative, who came to art after studying philosophy. In a neo-surrealist, pop art embrace, he has reimagined the marine crustacean as NFTs, sculptures, as a laptop keyboard (tapping straight into Decentraland), on T-shirts, as robots and now – in a tribute to Dalí – as a telephone. He sees art as a great connector, a conveyor of positive values and has a worldwide following of collectors.

The challenge for Buchanan Studio was how to bring these symbols and characters to life in the decor. “The focus of the house is on two creative people, but it was crucial that this didn’t become pastiche,” says Charlotte. “We had to be big on quality control as we were taking their designs and reinterpreting them in furniture, headboards, fabrics and decor while ensuring they remained true to the couple’s work,” says Angus, who drew from a vast black book of makers to realise the variety of material interpretations and bespoke furniture throughout the house.

The marble dining table is surrounded by Charlotte’s intricate metalwork chairs featuring “the eye”, which she now plans to put into production. “Once I started on homeware it became clear how banal interior decor can be. The Maison is an exceptionally good showcase,” she says, of her burgeoning design enterprise. In the master bedroom, panelled in wood that recalls the elegant interiors of Spitalfields houses erected by French Huguenot builders, one’s gaze is immediately drawn to another of her designs: a bedhead in sinuous white and gold metalwork.

The mezzanine is furnished with a wavy three-seat “love banquette” upholstered in textural off-white fabric, while four attic bedrooms – the Lobster, the Cactus, the Eye and the Uterus – are themed in tongue-and-groove panelling, with bespoke beds and furnishings.

The Colberts drew inspiration from their visits to art houses for their vision. “In Betty Woodman’s home near Florence, every aspect told her story down to the handmade cups and saucers,” says Philip, who also found imaginative ballast in Julian Schnabel’s Palazzo Chupi in Manhattan and in Alexander Calder’s studio in the French Indre-et-Loire Valley. Their own impressive art collection includes Dalí, of course, as well as a 3D ceramic by Fernand Léger and pieces by Jenny Holzer and the British artist and filmmaker Jeff Keen, which are hung in a very liveable way as opposed to “gallery” style. One terrific piece by Martin Creed – a crumpled ball of paper housed in a Perspex box on a plinth – stands by the fireplace; a reminder of the trials and tribulations of the creative process.

Maison Colbert is a house that will encourage lucid dreaming and idea generation for decades to come. “Success for me is about growing younger, remaining young in spirit and this attitude is of real value beyond all else – it’s the ultimate defiance, a positive against the odds, and that’s the spirit of art too,” says Philip. Charlotte nods in agreement: “Always remain curious,” she says. The lobster beside her appears to grin in agreement. 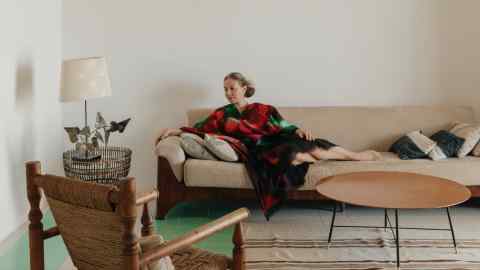 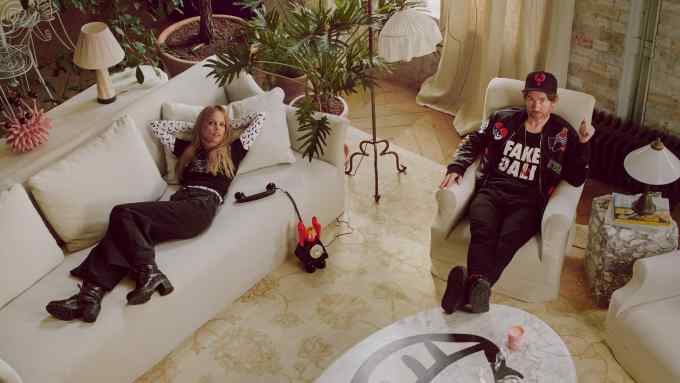