How To Spend It Interiors

Cabana fever: the rise of a cult interiors brand

There is a particularly joyous episode of Frasier entitled “Daphne Does Dinner”. In it, Kelsey Grammer’s eponymous, urbane and absurd radio psychiatrist advises his ex‑housekeeper on tabletop etiquette. She reaches for a set of ramekins and he recoils. “Oh dear…” he says, with a delivery as incendiary as a gimlet-soaked Wodehouse: “This is bad. There are two that are mismatched. It’s alright if they’re all mismatched, or even in pairs, but two is just… unheard of!”

Cabana is essentially a masterclass in the machinations of matching. It is an interior brand that represents style with wit, and even though everything about it has been thought out meticulously, it feels effortless. “Part of Cabana’s charm is that it is rather anti-decorating,” says British interior designer Robert Kime, who collaborated with the brand on a collection that included 16th-century Iznik tiles and 18th-century French tapestries from his own personal archive. “Decorating is about comfort and safety, and I think the crisis, in a funny way, has freed people. They’ve been told: that which makes them safe and comfortable is OK.”

Editor-in-chief Martina Mondadori co-founded Cabana as a biannual interiors magazine in 2014. It was a brave move, with print sales in decline, but in 2018 the business recorded a turnover of more than £2.29m, according to market-intelligence provider Global Database. Mondadori is no stranger to the world – her father, the late Leonardo Mondadori, was chairman of the Italian publishing giant Arnoldo Mondadori Editore. She remembers him fondly as an aesthete who took her to galleries and on his travels around the world. Her mother, Paola (who was born into the family behind the appliance giant Zanussi), raised her at her Milan apartment designed by the legendary architect, decorator and set designer Renzo Mongiardino, whose sumptuous, theatrical interiors also attracted clientele such as Aristotle Onassis and Gianni Versace. Later, Mondadori married financier Peter Sartogo, son of the architect Piero Sartogo.

These experiences feed into the Cabana aesthetic. Produced on lavish paper stock, the magazine was conceived as a limited-edition design object in itself, while documenting bold interiors and serving as a constantly changing cabinet of curiosities in print. It looked to the baroque more than it did to minimalism. In 2017, the brand began creating its own range of table-top products, collaborating with some of Mondadori’s favourite artisans, and its list of partners has included Carolina Herrera, Aerin Lauder and Ginori 1735 – the heritage Italian porcelain brand refreshed and fabulous once more under the auspices of new owner Gucci.

For this season, Mondadori had to navigate a difficult environment. Her new tableware collection, Artigiana, was conceived at her home in London during the first lockdown of 2020. Travel, always key to her research, was impossible, but necessity gave birth to invention. “I was looking at these plates from my grandmother’s kitchen cabinet from her house near Venice, and suddenly saw them with new eyes,” she explains over Zoom from her second home in Milan. “I decided that one of them could be the start of something.” She played with the original design to create Blossom, hand-decorated plates with rustic daubs in rich yellow and burgundy or blue and green. “The moment you use new colours, the mood changes. I already had two tablecloth patterns in my head, so the plates had to look good on them, but I didn’t want anything matchy-matchy.”

When it comes to the transformative properties of colour on ceramic, Mondadori points to the playful style of Ginori 1735 under the creative directorship of Alessandro Michele, and his successful reintroduction of Gio Ponti designs such as Oriente Italiano – a Chinoiserie pattern in malachite green, citrus yellow and candy-floss pink. “Alessandro turned the tables. I wouldn’t call it maximalism, I think it’s just a new appreciation for the past,” she says. Like Michele, heritage and authenticity underpin Mondadori’s ethos, as Artigiana (the Italian word for artisan) alludes to. The Blossom plates (from €72) were produced by artisans in Umbria, whom she discovered between lockdowns when visiting friends Alessio and Carlotta Carabba Tettamanti at their rustic holiday cottages near Perugia. “I witnessed the crafting of the plates and the women decorating them by hand,” she says. “I was struck by the importance of supporting small local businesses and empowering these crafts-people. We now have a new ceramicist in our portfolio.”

Murano was the next port of call, where a series of glass oil vessels – referencing decorative grappa bottles common to the Tyrol of the 19th century – were made and handpainted with pretty florals. “Everyone we use is a master of their local materials,” Mondadori explains. “The story we are telling looks at what they have done for generations, with us tweaking the colours or patterns.” The placemats (from €37.50) in the collection, key to the “layered” Cabana aesthetic, are a good example of this. The Goya design was hand-embroidered by local women outside Cairo, while Cabana worked with a young brand dedicated to Colombian craftsmanship on the vibrant Cartagena designs. For Lecce, they used the same artisans in Puglia who wove elements of Dior’s Cruise collection last summer. “We worked with them over Zoom. Maria Grazia Chiuri had them work in grey and black, and we did something totally different, with lots of colour.”

Design inspiration comes to Mondadori from many sources. The Artigiana tablecloths and napkins are in two prints – one influenced by a single Moroccan tile. “It’s quite a simple pattern but I liked the way it brings together all the primary colours,” she says. Many a traveller has struggled home from Marrakech with a filigree lamp and a few textiles in the hope of channelling Talitha Getty in their living room only to realise they’ve made a terrible error in judgement. “I think the mistake people make when they are buying in Marrakech or Istanbul is that they go for local folk designs that you see everywhere. They don’t think about colour,” Mondadori continues. “Be bold. It’s what you can learn from India and Mexico too, and it’s what Yves Saint Laurent got from moving to Marrakech.”

Saint Laurent was a major influence on the collection, not solely in terms of his aesthetic but in the way travel inspired his research and development process. He discovered the Red City in a big way during the 1960s, buying a second home there with partner Pierre Bergé, and the experience broadened the colour palette within his work from the beatnik black of Paris to a rainbow of hallucinatory hippy chic, as if crash-landing in Oz from monochrome Kansas. “He discovered the blue of the Jardin Majorelle, and clashed orange with fuchsia,” says Mondadori. “It changed the way he put things together, and his work became international. But a lot of it was armchair travel [researched from his office in both Marrakech and Paris], which is what I have been doing over the past year. I spent my days looking at books on faraway cultures, craftsmanship and patterns.”

Be bold with colour. It’s what you can learn from India and Mexico

Mondadori’s armchair flights of fancy took her from Marrakech to Japan, which gave rise to the collection’s other bright tablecloth design. “I saw the kimono exhibition at London’s V&A before things closed down – I often go there for inspiration,” she says. “A few weeks later, I was looking through my bookshelves and found an old book on antique kimonos. One picture was the start of everything.”

It was a time when Mondadori did what many others found themselves doing last year – she got busy at home rummaging through boxes and drawers unopened for years. “I found tons of swatches of fabrics I had forgotten about, and ordered some square cork boards to create moodboards for rooms that will never exist. It was a calming activity,” she recalls. “I am not a designer and I’m really bad at drawing, but I like to find something that triggers my imagination and build on that. We have an in-house graphic designer who works on patterns, and I have artisans who I can trust to interpret things.”

How To Spend It
Issimo – the ultimate e-boutique for Italophiles 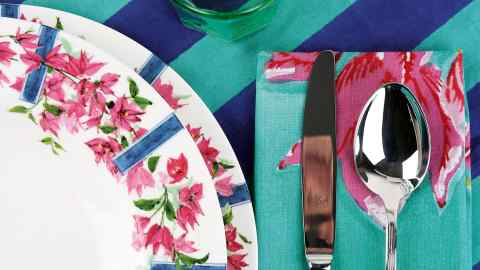 Cabana’s next wave of homewares (it offers everything from plates to furniture) will, Mondadori hopes, be as global. Photographing the Artigiana collection has already been an escape; the location for the shoot – a glorious country pile in Italy’s Moncalieri framed by Russell Page gardens – is totally evocative of the Cabana lifestyle. With rock-crystal chandeliers in almost every room, some adorned with frescos and trompe l’oeil, there are echoes here too of Mondadori’s past: the interiors were reimagined by Renzo Mongiardino in the 1970s – the very same designer who created her childhood home.

Get alerts on Interiors when a new story is published