Breakfast, lunch and dinner… Why Tiffany’s is hungry for more

Meet the team behind the all-American jeweller’s megawatt reinvention

Audrey Hepburn clutching a pastry and takeaway coffee on the corner of Fifth Avenue and 57th Street, peering longingly into a plate-glass window display. A robin’s-egg-blue box. An advertisement of a handsome young man down on one knee in Central Park, shot in black and white.

For most Americans, these images are indelibly, and exclusively, linked to the name of Tiffany & Co. Ownership of such iconography was a leading reason LVMH chairman and CEO Bernard Arnault agreed, at the end of 2019, to tender $16.2bn to acquire the publicly listed jeweller in the luxury sector’s largest ever deal (following a contentious renegotiation, he eventually paid $15.8bn). “It’s the only brand I know that owns a colour,” he said at the time.

For LVMH, Tiffany was a major asset. Before the acquisition, hard luxury (jewellery and watches) accounted for just eight per cent of its sales, most coming from “soft luxury” such as Louis Vuitton handbags and Dior Bar jackets. By the end of 2019, hard luxury had been outpacing soft luxury growth for the best part of a decade.

The jeweller, however, was in need of a good polish. Founded by Charles Lewis Tiffany and his schoolfriend John B Young as a stationery and “fancy goods” shop in 1837, it soon became a destination for fine jewellery and silverware. It augmented its fame in the 1880s when it was invited to design the Great Seal of the United States (which still appears on the $1 bill) and made off, in a competitive auction, with nearly one-third of the French Crown Jewels. A succession of designers cemented its place as one of the world’s foremost jewellers in the 20th century, including Elsa Peretti in the 1970s and Paloma Picasso in the ’80s.

Although the launches of recent collections have been successful – the graphic “Tiffany T” line in 2014 and the industrial “HardWear” collection in 2017, both designed by Francesca Amfitheatrof, who is now at Louis Vuitton – by the time LVMH came knocking, growth had stagnated. Revenues fell in 2015 and 2016, and did not recover to 2014 levels until 2018 (they declined again slightly to $4.42bn in 2019). Its stores and advertisements had become dated and a little rote. “They were trustworthy but incredibly dull and cold,” says Erwan Rambourg, global head of consumer and retail research at HSBC.

“My father said we were driving a Ferrari that needs fuel,” says Alexandre Arnault, in conversation with Tiffany president and chief executive Anthony Ledru. The 29-year-old, Bernard Arnault’s third eldest child and, as of early 2021, the jeweller’s executive vice president of product and communications, considers the brand “ripe for disruption”.

Arnault moved to Manhattan from the German-based Rimowa in January 2021 to join Tiffany’s new team that, in addition to Ledru – a former Louis Vuitton executive who ran Tiffany’s North America division from 2013 to 2014 – includes Louis Vuitton chairman and CEO Michael Burke, who last year also became Tiffany’s chairman; Nathalie Verdeille, the former creative director of Cartier who is now Tiffany’s artistic director; and chief commercial officer Gavin Haig, who joined from Burberry in October 2021. Verdeille, Ledru and Haig all formerly held executive roles at Richemont-owned Cartier, Tiffany’s chief rival. Cartier filed a complaint against Tiffany in February, accusing it of stealing trade secrets about its high jewellery operation from another former Cartier employee it hired in December. “Cartier fully respects the rights of competitors to pursue their commercial objectives,” the jeweller said in a statement. “In this case, however, Tiffany’s commercial ambition crossed the line between the ordinary course of business and unfair competition.” Tiffany denies the allegation.

At Rimowa, Arnault persuaded some of the design world’s most notable figures – including Kim Jones and the late Virgil Abloh – to work on collaborations that would popularise the suitcase. He and Ledru are betting on a similar strategy for the far larger and more famous Tiffany brand. Over the past 15 months, the pair have embarked on a rapid and daring communications strategy that has ruffled feathers in the conservative luxury sector – a move designed to make Tiffany cooler to 16-year-old girls (“And 16-year-old boys,” chimes Arnault).

Less than four months after LVMH took control, Tiffany announced it was trading its signature robin’s-egg blue for the canary yellow of its famed 128.54-carat Tiffany Diamond. Followers who didn’t recognise it as an April Fool’s Day joke were stunned. In July, a campaign featuring videos of brooding models in white cotton vests, jeans and silver jewellery under the headline “Not Your Mother’s Tiffany” provoked an emotional response.

According to Arnault, the ads weren’t designed to be controversial. “But the amount of impressions we got compared to the investment was quite impressive,” he says. “It’s a big change in terms of what other jewellery companies are doing on Instagram – product, white background, logo. It’s always been very conservative. It’s time to push the boundaries a little bit.”

Tiffany dropped its first big campaign in August. It featured Beyoncé as a modern-day Audrey Hepburn with the Tiffany Diamond draped across her back, serenading her husband Jay-Z against a rarely seen Jean-Michel Basquiat painting, recently acquired by Tiffany. The ad was in the headlines for days, partly because securing Beyoncé and Jay-Z together was a real coup – aided, no doubt, by LVMH acquiring a 50 per cent stake in Jay-Z’s Armand de Brignac champagne – and partly because of the uproar surrounding the use of the Basquiat. In an interview with WWD, Arnault said the company bought the painting because it appeared to be a “homage” to Tiffany – a connection fervently denied by a former Basquiat assistant and the original owner of the work.

Contentious or not, Tiffany has become a brand that people are talking about again. “Tiffany has gained tremendous visibility over the past 12 months,” adds HSBC’s Rambourg. “The execution and speed has taken everyone by surprise.” It helps, he adds, that “Arnault’s son is taking care of those things. [He doesn’t] need tons of validation and time wasted trying to move forward.”

That visibility has been aided too by a diverse array of new ambassadors, among them the singer Rosé of South Korean band Blackpink, Chinese-American skier Eileen Gu, actor Anya Taylor-Joy and the model Hailey Bieber. The jeweller has released a collaboration with streetwear label Supreme and is working on another with Pharrell Williams. “He’s been a friend of the group for ever,” says Arnault. “I always wanted to find a way to partner with him.” Its influencer network has widened, with a focus on “micro-influencers who don’t have 150mn followers but are very relevant within specific communities”, who have agreed to “exclusive [jewellery] relationships” with Tiffany, says Arnault. The ambassadors are often styled wearing fine jewellery casually, with straight-leg jeans and T-shirts, in an effort to persuade young people that high-ticket items can be worn every day.

The marketing overhaul has been rapid but it will take longer to revamp the product and stores. Jewellery’s lead times are significantly longer than in the fashion industry, where a single collection can be enough to signal a new direction (see Gucci under Alessandro Michele and Bottega Veneta under former designer Daniel Lee), and it takes at least two years for new product to be developed from conception to design. But there are already hints of change. Tiffany is turning its attention to gold – part of an effort to “elevate” the offer, says Ledru. It is also building its stable of what Rambourg describes as “products that are instantly recognisable across a restaurant”, starting with the “Knot” collection, which launched in the US last September. One of Tiffany’s bestsellers of that class is the “T” collection (at Cartier, it is “Love”; at Van Cleef & Arpels, the “Alhambra” collection, featuring its signature four-leaf clover).

The brand has also homed in on the whimsical, naturalistic archives of Jean Schlumberger, who began his career making buttons for Schiaparelli in Paris before joining Tiffany in the mid-1950s, leaving behind a vast cache of sketches upon his death in 1987. A favourite of Jacqueline Kennedy (his bracelets became known as “Jackie bracelets”), the Duchess of Windsor and Elizabeth Taylor, he mounted the Tiffany Diamond originally worn by Audrey Hepburn and designed the Bird On A Rock brooch which, reconstructed into cuff links, Jay-Z wore in the “About Love” ad. Tiffany’s latest high jewellery – bespoke creations that can run into the millions – has drawn heavily upon the Schlumberger archives.

Beyond products, the brand’s heritage will be highlighted in an exhibition opening at London’s Saatchi Gallery in June. Vision & Virtuosity is split into chapters exploring Tiffany’s history, including its founder’s legacy, former designers, Blue Book high jewellery collections and its famous stones –including the Tiffany Diamond.

The bigger plan is to evolve Tiffany from a jeweller to “the ultimate lifestyle brand”, says Ledru. “Jewellery is our core business but we also sell home, accessories, perfume,” adds Arnault, noting that these categories present particularly good opportunities. “We don’t have a limit as to what we can do in the consumer space.” Could that mean a fashion line? “You can never say never. But [LVMH is] strong in fashion already.”

HTSI
Why you should mix your precious metals 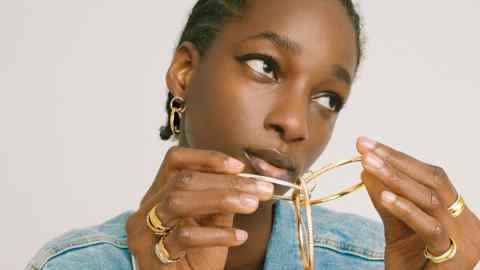 By early 2023, Tiffany is planning to reopen its 10-storey Fifth Avenue flagship – a project begun before the acquisition – that will top Dior’s recent Avenue Montaigne makeover as “the largest investment LVMH has done for a single brand”, according to Ledru. The store is one of the brand’s most precious assets, being among the most visited tourist sites in Manhattan (thanks, Audrey) and historically accounting for 8 per cent of sales. The new space, designed by fashion’s favourite architect Peter Marino, will offer a more “immersive” and “elevated” experience than in the past, says Ledru.

Clues as to what it might contain can be seen at the shop-in-shop Tiffany unveiled at Le Bon Marché in November, elements of which have since been rolled out to locations in Barcelona, Berlin and Stockholm. Gone are the dark wood and chrome of the existing stores, replaced by a softer, warmer palette of cream and pale wood overhung with gold stars.

Flashy campaigns, collaborations with hip-hop stars and streetwear labels, a push toward higher-end products and stores – it’s a playbook LVMH has run, successfully, at its two highest-revenue brands, Louis Vuitton and Dior. Indeed, many of those who have worked with Tiffany in the past 15 months – Jay-Z, Pharrell, Supreme, Marino – have already lent their names to projects across LVMH. What is remarkable about the Tiffany transformation is not so much its novelty as its ambition and speed.

The changes are already starting to translate at the till. Tiffany reported its best-ever year in 2021 and, according to HSBC projections, it is on track to increase its size by more than a third in three years – from €4.32bn in 2021 to €6.46bn in 2024, substantially closing the gap with category leader Cartier – albeit with significantly lower profit margins.

Ledru demurs when asked about his financial targets. “There are big expectations,” he says. “And rightly. We have something phenomenal in our hands and we are going to make it happen.” A new C-suite, the backing of a powerful conglomerate, a rich and varied legacy: it would almost be more difficult not to.